Blast from the Past: Sky High 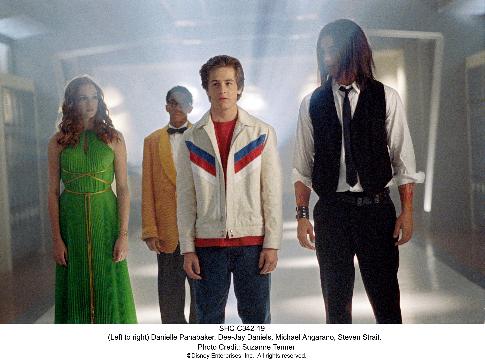 After recently watching Sky High again, I was met with overwhelming nostalgia. Characters, such as Mr. Medulla, that I completely forgot about and scenes that were as great as I remember were in action for the first time in years, so I was very excited. I soon realized that Sky High was a really good movie for its time and, even now, made me really laugh. Whether my laughing was a defense mechanism for any cringe, or the jokes were actually funny, Sky High is still a knee-slapper and way better than I remembered.

This Disney Channel classic isn’t like many ordinary, boring high school stories. Disney, literally, lifts this high school tale to the next level, by making the school anti-gravitational and giving everyone superpowers.

In a world where superheroes exist and are constantly praised, Will Stronghold (Michael Angarano), son of the two most famous superheroes, prepares for his first day of superhero high-school, but faces complications because he has no powers. He doesn’t tell this to his parents, Commander (Kurt Russel), who has super-strength, and Jetstream (Kelly Preston), who can fly, in order to make them proud. Because he fails to display his powers in school, he is tossed to the side and labeled as a side-kick with a group of others who all have unique abilities. He becomes frenemies with Warren Peace (“War and Peace,” as his mother was a superhero, and his father was a villain) the son of a villain who Will’s dad, Commander, brought to justice. Soon after, Will meets Gwen Grayson, a charismatic senior (Mary Elizabeth Winstead), but later realizes she isn’t who she seems to be and has an ulterior motive. The movie continues with fire-balls, an enthusiastic flying-bus driver, and an ending is filled with babies.

The ensemble cast consists of Will Stronghold, his best friend Layla Williams (Danielle Panabaker) who can control plant growth, Magenta (Kelly Vitz) who can transform into a guinea pig, Zack (Nicholas Braun) who can glow, Ethan (Dee jay Daniels) who can melt, and Warren Peace (Steven Strait) who can summon fire.

Disney did a good job developing the characters’ personalities, making every single character count. Even though most of them are side-kicks, they end up being the main threat to the sinister plans that take place.

In 2005, Disney Channel had an entirely different style of television. Sky High, compared to other Disney Channel original movies, is one of their best, and most timeless productions. Other notable films from that era include The Adventures of Sharkboy and Lavagirl, Chicken Little, and The Chronicles of Narnia: The Lion, the Witch and the Wardrobe.

I was surprised by the quality of the film (acting, videography, special effects, etc., production value). The CGI was whimsical and fun, but it worked, and the action scenes were dynamic and engaging. I can see now why Disney bought Marvel four years later. The recent Marvel movies, though more mature, are quite similar in humor and use of color too. Sky High is a great insight into Disney’s early work with superheroes (Unlike their 2007 Underdog).

Some things I wished Disney did was push this film commercially, even though it did well in the Box Office with $86.4 million on a $35 million budget. I believe this film deserves as much (possibly even more) praise as the High School Musical saga gets. Sky High and many other movies from the 2000s have a charm unlike most movies today. It dismisses the cookie-cutter high school movie format and has a strong relatable factor.

Sky High has a natural flow to it, and everything that happens feels right in terms of a coming-of-age production. Establishing identity and relieving parental pressure are some main themes in the film. Will struggles with pleasing his parents and wanting to be a hero, but realizes that being a side-kick is just as important. This commends the classic virtue that it’s okay to be an outcast and just because you’re not the most recognised doesn’t mean you’re not valuable. While some of us may feel like we have superpowers, at the end of the day, we’re all human.

Sky High was one of my favorite Disney Channel original flicks growing up, next to Minute Men and Smarthouse, and feels as timeless as any superhero movie does. I recommend watching this film again if you haven’t for a while. If you’ve never watched it, then you’re in for a Disney treat. I give this movie 5/5 Spinnaker Sails.

Sky High will be available to stream on Disney Plus on December 1.