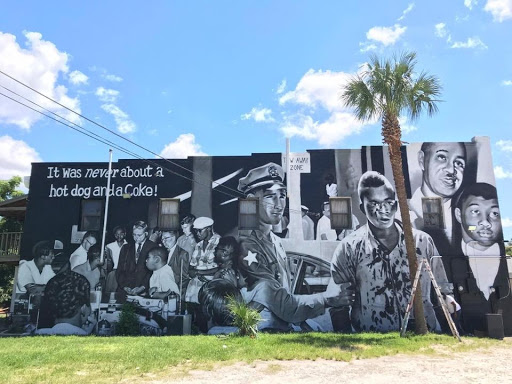 Rodney Hurst Sr. is a natural orator. Hearing him speak, it is obvious he is no stranger to addressing a crowd. He has said these words, and had these conversations about systemic racism for decades, and yet you may not recognize his name.

Martin Luther King Jr. may be a household name around the world, but Rodney Hurst Sr. is a local, civil rights legend. Hurst was a young man during a period of intense racism and segregation in Jacksonville. He is a survivor of a particularly gruesome attack on the black community that has come to be known as ‘Ax Handle Saturday.’

By the time Hurst was 11-years-old, he was already participating in civil rights organizing efforts. At just 15-years-old, he became president of the National Association for the Advancement of Colored People (NAACP).

“We were kids then,” Hurst said. “Most of us were teenagers or had just graduated from high school, but even as kids we understood what racism was and why we had to stand up against it.”

Hurst and his colleagues had been organizing peaceful protests for weeks in the summer of 1960 in downtown Jacksonville. They held peaceful sit-ins at dining establishments with segregated service. The restaurants were connected to department stores where black people were allowed to spend their money, but when it came to dining, there was white seating and there was black seating.

“Even though the stores let black people shop, they wouldn’t let us eat in their restaurants. It was insulting, dehumanizing and demeaning,” Hurst said. “All of our efforts were designed for us to get the rights we should have had and were supposedly guaranteed by the constitution.”

The white supremacists of the time did not see it that way. On Saturday, August 27 of 1960, a white mob met the peaceful protesters with bats and ax handles.

“This was southern, white America’s response to black people asserting their rights as Americans,” Hurst said. “The leadership of the city knew there was going to be violence that day, there were no police around,” Hurst said. No police, but in the center of Hemming Park there was a container of bats and ax handles with a sign that said ‘free ax handles.’

Since there was minimal news coverage of the event at the time, best estimates suggest that there were over 200 white supremacists in the mob that attacked the children that day.

Now, some 60-years-later the climate for black and brown people has not changed much at all.

“The problems are still the same,” Hurst said. “You see police brutality, racism and institutional racism, and an overt racist in the White House, so fighting racism hasn’t changed much. The struggle continues.”

Ax Handle Saturday is part of Jacksonville’s painful racist past, but these dark aspects of a place and its people must be brought to light for any changes to be made.

“I don’t think you can start teaching kids too early about racism, especially black and brown children,” Hurst said. “Today, there is no formula for what a young person concerned about racism should do, it’s always an individual choice. But doing nothing is not an option.”

Hurst said one of his mentors would tell him ‘if you aren’t part of the solution, you are part of the problem.’

Having battled systemic racism for his entire life, Hurst has only grown wiser and more patient. He sees the so-called ‘new awareness’ of racism with a healthy dash of scepticism.

“In my years on this Earth, I have learned to not listen to what they say, but to watch what they do,” Hurst said. “If there is some action to go along with all the talk, well then there is some light at the end of the tunnel.”

Hurst has never stopped organizing and educating. He has written two books and has a third set to come out next month. His first book, ‘It Was Never About a Hotdog and a Coke,’ offers a unique perspective of the social, political, and civic atmosphere of Jacksonville in the 60’s. Through this lens, it becomes clear that there aren’t isolated, random acts of racial violence, in this city or elsewhere, but patterns of racial violence that have become so woven into the fabric of our lives that they can go undetected.

“White America needs to deal with their racism and their white privilege,” Hurst said. “Black and brown folks are still fighting but it cannot and will not change until white folks decide it is time to change the institutions of racism.”

August, 27 this year marks the 60th anniversary of Ax Handle Saturday. There have been plans for a large commemoration event long before it was announced the Republic National Convention would take place here that same weekend. Hurst isn’t worried.

“If the same negative elements try to interrupt or otherwise enact some violence, there isn’t anything we can do to stop it,” Hurst said. “We organize peaceful demonstrations to protest the pathology of racism, this will be no different.”

But hopefully this time it will be different. Hopefully this time, white America is at the table and there can be a reconciliation with a racist past and a bolstering of the political will to address systemic racism going forward.

The commemoration gathering will be held in Hemming Park downtown on Saturday August 27, from 12 p.m. until about 2 p.m. Masks will be required and provided for those without, social distancing will be practiced as much is possible.

Folks will gather and, as Hurst would say, the struggle will continue.

A locally produced documentary that was produced about Ax Handle Saturday.