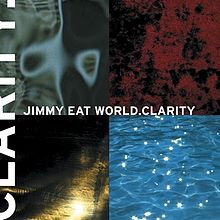 INTRODUCTION: Clarity is the third studio album released by Jimmy Eat World — an album that resulted in the band being dropped by their record label in 1999, but is now considered to be one of the greatest emo records of all time. Though most know the band from their 2001 release Bleed American, the true scope of their talent is most prevalent in Clarity. With introspective lyricism and dynamic instruments, this album is a genre-defining, must-listen for any fans of emo, pop-punk, or alternative music. This is a review of the original 1999 release — the bonus tracks in the 2007 remaster are not included in this review.

Table For Glasses: The opener for Clarity is a slow-paced, dreamy song, featuring organs, sparkling chimes, and melancholia-tinged vocals from lead singer Jim Adkins. The meaning of the song is rather vague, a trend that continues throughout the album — however, the lyrics are quite open-ended. Though Adkins wrote this song after witnessing the clean-up process after an art show, the bridge suggests the track is open to personal interpretation: “Lead my skeptic sight, lead my skeptic sight, not asking of me anything, saying nothing about what it means, without anybody telling me how I should feel.”

Lucky Denver Mint: The track with most mainstream recognition (it was featured on the soundtrack of a Drew Barrymore movie in the ‘90s) is a 3:49 gem of alternative rock with strong pop undertones. The title “Lucky Denver Mint” is a reference to the Denver Mint in Colorado, where United States currency is produced — since coins from there are rare to come by, finding one is quite lucky. While the title contains a somewhat random reference, it makes sense in context with the overarching theme of the track. In a declarative chorus, Adkins states “you’re not bigger than this, not better, why can’t you learn,” referencing Jimmy Eat World’s struggle to create a commercially successful emo album in the climate of grunge.

Your New Aesthetic: “Your New Aesthetic” is one of the heaviest songs on the album. The verses are eerie, with pounding drums, wordless vocalization, and screeching guitars — all crescendoing to explosive vocals and Adkins screaming “imitate and water down, selection breathes on its own, make them open the request line, let selection kill the old, turn off the radio.” Though some lyrics appear to be purposefully vague, the theme of the song appears to be one of anti-conformity.

Believe In What You Want: In direct contrast to “Your New Aesthetic,” “Believe In What You Want” has some of the strongest pop hooks throughout the album. It’s jerky in the verses, with chiming guitars and synths aiding Adkins’ desperation: “well, don’t bother going through the motions, nothing that makes sense ever works out […] please keep in sight what makes you care, you have it always.” The chorus is explosive and uplifting, as Adkins asks if one genuinely believes in what they want, or if their thought process is merely a product of the time. Although Adkins’ vocal performance is strong throughout the album, it is particularly notable here.

A Sunday: Opening with sparkling chimes and soft violins, Adkins dissects the meaning of Sunday. Not necessarily from a holy viewpoint, but rather seeing the day through a clear lens after a night of partying — at least, that’s how I interpret it to mean. In the chorus, he gently sings “the haze clears from your eyes on a Sunday, on a Sunday” amongst synths and the gentle chiming from the beginning, only to make an explosive turn at the end, with violins and heavy-hitting guitars.

Crush: The instrumental composition on “Crush” is particularly impressive. The lyrics are short, sweet, and vague — but, rather than lyrics carrying the song, the instrumentals are the focal point. Opening up with emo/pop-punk riffs, the track goes on to descend into heavy breakdowns, crisp lead guitar riffs, and eventual silence that leads into an explosive last chorus. I wouldn’t call this track a filler due to the brilliance of the composition — but it’s not necessarily a stand-out.

12.23.95: This track has an elaborate electronic introduction, featuring distorted radio noises and static, before descending into shimmery-sounding plucked guitar riffs. It’s relatively simple in lyrical structure: merely one verse repeated twice and a bridge wishing a loved one “Merry Christmas.” The song is likely about Adkins experiencing a break-up right around the holiday season, yet still wishing his partner well — “I didn’t mean to leave you hanging on, I didn’t mean to leave you all alone, I didn’t know what to say.”

Ten: In the years I’ve been familiar with and loved this album, I usually tend to skip “Ten.” It’s not that it’s a bad song — it just fails to capture my interest the way other tracks on Clarity do. It’s a simple song, relying heavily on marching band-esque drums, layered harmonies, and chiming piano in between choruses. However, Adkins’ vocals are heartfelt and genuine on this track, adding to the nostalgic sound “Ten” carries.

Just Watch The Fireworks: This is easily one of the best songs that Jimmy Eat World has ever put out. I think it speaks to the allure of what made the band different from others in the late 1990s — Adkins’ lyrics read like a page from a diary, without coming across as melodramatic or self-absorbed. Rather, highlighted by a simple drum beat and violins (that, in typical Jimmy Eat World fashion, crescendos into a grandiose finale), the track is a beautiful ode to love: “I promised I’d see it again, I promised I’d see this with you now […] just enough so I can hear you, I’ll stay up as long as it takes.”

For Me This Is Heaven: Driven by pianos, melodic guitar riffs, and rolling drum loops, “For Me This Is Heaven” is a nostalgia-tinged recollection of a relationship that is close to stalling out. In a raw and emotional delivery, Adkins asks: “can you still feel the butterflies […] can you still hear the last goodnight?” All around, it’s an extremely touching and emotional song.

Blister: This is the only track on Clarity to feature guitarist Tom Linton on lead vocals, rather than Jim Adkins — his vocals are rougher and grittier than Adkins’ crystal-clear delivery, and quite fitting for “Blister,” one of the heavier songs on the album. It’s full of passion and anthemic declarations — over pounding drums and guitars in the chorus, Linton nearly screams “and how long would it take me, to walk across the United States all alone, the West coast has been traumatized, and I think I’m the only one still alive.” It’s one of my favorites on the album.

Goodbye Sky Harbor: I’ve never come across a track that’s 16 minutes long, let alone one that’s worth listening to all the way through. That is, until I listened to “Goodbye Sky Harbor,” the closing number on Clarity. The lyrics, only lasting until the 4:00 minute mark, are inspired by John Irving’s novel “A Prayer for Owen Meany,” a novel about two young boys growing up in a small town in the 1950s and 1960s. The real standout of this track, however, is the 12 minute outro that features drum shifts, wordless vocalization, synths, repetitive guitar riffs, eventually all crescendoing into silence at around the 13:45 minute mark — only to delve into an electronic, Postal Service-esque finale. If you have the patience for it, it’s a magnificent piece of art.

SUMMARY: Without hesitation, Clarity is a perfect album. In my eyes, a perfect album doesn’t mean every track is a single-worthy, stand-out. Rather, every track is unique in its self-awareness and composition, flowing seamlessly — one after another without feeling overbearing or like you’re hearing the same song over and over again. It’s an album full of understated beauty – an album that doesn’t try too hard to impress its listeners. The simplicity and beauty present without trying is perhaps what makes Clarity such a remarkable album.