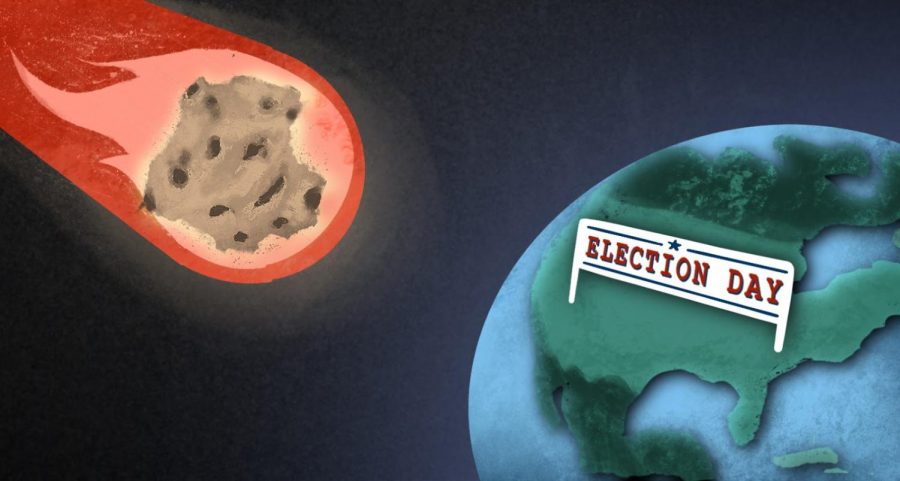 As if 2020 couldn’t get worse enough: BOOM, asteroid. All jokes aside, there isn’t any real reason to panic.

For those who aren’t astronomers, Asteroids are large chunks of space rock that vary in size, but are usually far smaller than planets. There are nearly one million asteroids in our Solar System, and the majority of them orbit the Sun in the Asteroid Belt between Jupiter and Mars.

This asteroid in particular, officially called 2018 VP1, is a relatively small asteroid that is not part of the Belt, but orbits separately around the Sun. As its name suggests, it was first discovered when it came near Earth in 2018, and it was predicted that it would return in November 2020, a day before the Presidential Election between Joe Biden and Donald Trump. Should we be concerned?

Asteroid 2018VP1 is very small, approx. 6.5 feet, and poses no threat to Earth! It currently has a 0.41% chance of entering our planet’s atmosphere, but if it did, it would disintegrate due to its extremely small size.

The short answer is no, not really. NASA estimates that 2018 VP1 has a less than 1% chance to impact Earth. That being said, 2018 VP1 is only about the size of a refrigerator. An asteroid that size, if it did manage to end up on a collision path with Earth, its size means it would burn up entering the Atmosphere, before it even has a chance to see the ground.

Larger asteroids can leave impacts that wipe out species, such as the asteroid that wiped out the dinosaurs. However, Asteroids that large only hit Earth once about every twenty million years. By contrast, smaller, non-dangerous asteroids fly very close to Earth or burn up before impact all the time. It’s so frequent, that just last week, a similarly sized asteroid flew incredibly close to Earth, without any sort of panic or frenzy as a result.

In summary, even if this asteroid does end up on a trajectory to hit Earth, its pitiful size means it wouldn’t even make a dent in our daily routines.