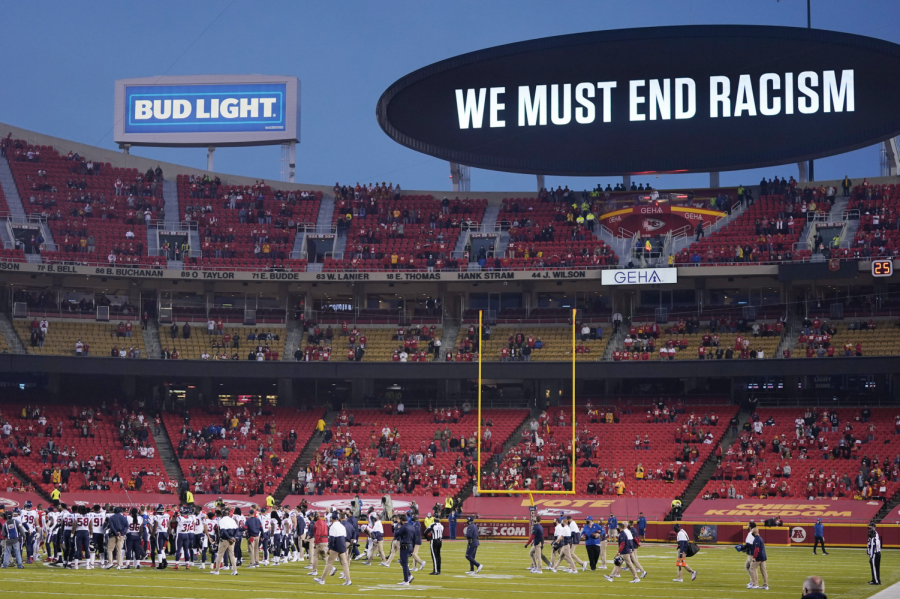 Playing a contact sport during a pandemic is a daunting challenge to achieve, but the NFL is back on the turf with a new mindset as the 2020 NFL season officially began last night with the Kansas City Chiefs hosting (and defeating) the Houston Texans.

Here’s the recap of the night

As the socially distanced crowd of 17,000 spectators began filling Arrowhead Stadium, there was a slight but noticeable feeling in the air of what was to come of both the game and the national anthem.

“End Racism” and “It takes all of us” were messages painted on the endzone as the NFL is now at the forefront of the social distance movement. As both teams demonstrated their stance on the issues at hand by not coming out of the locker room for the national anthem and locked arms after shaking hands before the game in a stance of unity.

This stance and both teams running out of the locker rooms came with a rain of boos from the hostile Kansas City crowd.

Nonetheless, the stance had been taken for the world to see. As the opening kickoff sailed for a touchback, it was time to play football but also continue a push for change.

The game was essentially the Patrick Mahomes show with the reigning super bowl MVP throwing for 211 yards and three touchdowns. The opposing quarterback Deshaun Watson had a rough start to the season throwing 253 passing yards but only scoring two touchdowns and an interception.

One bright spot in the game was Chiefs rookie running back Clyde Edwards-Helaire making a very strong start to his career by rushing for 138 yards and one touchdown. His touchdown run of 19 yards late in the first quarter started the scoring for the game and was his first career touchdown.

As the clock ran out, the final score was 31-20 in favor of the Chiefs who also defeated the Texans en route to winning last year’s super bowl. The Texans now fall to last place in the AFC South division.

The world of sports in the U.S. was much different back then. COVID-19 was the last thing on everyone’s mind as the Chiefs defeated the 49ers to win it all. Now, not many fans are allowed at the games and social distancing is mandatory while also wearing a mask. COVID has not stopped players and coaches demanding change though, as a strong message was sent of unity.

While the social justice movement will be a key thought on the minds of many this season, the league is one game down and many more voices will be heard as 17 weeks of football start with last night’s game.