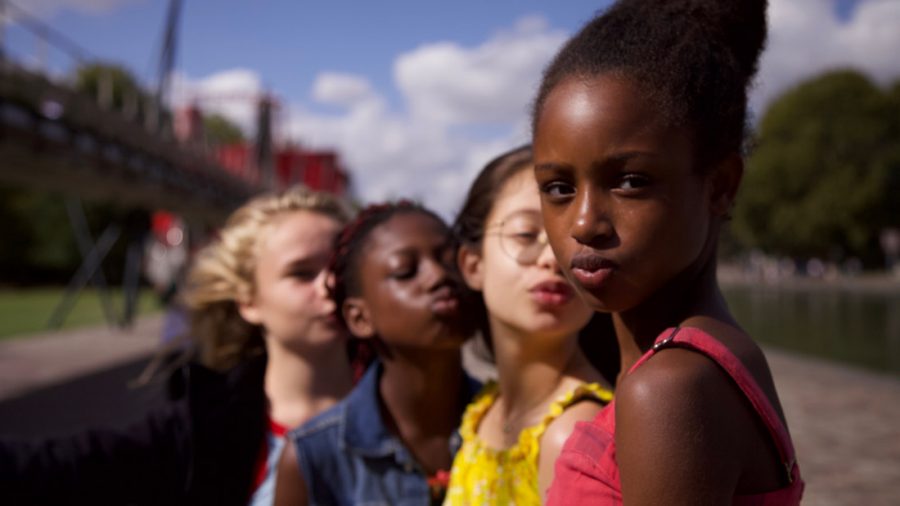 “Cuties.” This seemingly innocuous term has taken on a new meaning with the latest release of the Netflix movie of the same name. The backlash this film received was monumental. But does it truly deserve this much scrutiny?

The French film, directed by Maïmouna Doucouré, is described by Netflix as, “Eleven-year-old Amy starts to rebel against her conservative family’s traditions when she becomes fascinated with a free-spirited dance crew.”

The main character Amy, played by Fathia Youssouf, is portrayed as an outcast at the film’s beginning. Having just moved to France with her mother Mariam, Amy hasn’t found herself a group of friends. However, she does become drawn to a group of girls around her same age.

Despite their age, these girls—who go by Angelica, Jess, Yasmine, and Coumba—are seen dancing provocatively. It is later revealed that the girls are a part of a dance group called Mignonnes, or Cuties in English. The girls are particularly nasty to Amy at first, but as Angelica starts a friendship with her, the rest of the girls slowly begin to accept Amy. The bond is solidified when Yasmine is kicked out of the group after physically fighting Angelica, and Amy is ushered into the dancing crew as her replacement.

The personalities of the original Cuties members are extremely concerning. Each girl seems to enjoy the pain of others, which is shown when one of them hits Amy with a rock and the rest of them excitedly congratulate her on her “good aim.” While this is just one example, it does exemplify behavior that is consistent throughout the film.

This behavior isn’t exactly addressed, either, in terms of repercussions. The girls just continuously act in erratic ways, such as stealing from stores and aggravating teachers, and yet they never deal with the consequences of these actions. It becomes increasingly aggravating for the audience as the story progresses.

Amy herself is shown to have a dark side, although it also isn’t addressed. Throughout the film, Amy is shown acting out by doing things such as stealing her cousin’s phone and stabbing her classmate with a pencil, among other things. Yet again, there are no repercussions for her. It’s almost as if the film excuses these things and writes them off as a part of Amy growing up. In reality, these events show that Amy, along with the other members of the Cuties, need serious help.

The idea that Amy needs psychological help is understandable if you take into consideration her family’s situation in the film. Mariam, Amy, and Amy’s two siblings just moved to France and are currently awaiting the father’s return. However, it won’t just be him who moves in. It will also be the new second wife he’s taken on, who even has her own room in the house. This is shown to be heartbreaking for Mariam and confusing for Amy.

Amy also has an aunt who helps Mariam take care of the three children. This aunt regularly tells Amy that she must remain pious, modest and obedient to her future husband in order to avoid hell, which is already filled with women, according to the aunt. Understanding this makes Amy’s rebellion make a bit more sense.

Now let’s discuss the elephant in the room: the dancing scenes. These scenes were featured prominently in Netflix’s advertisement for the film. So much, in fact, that you would expect the film to feature a large amount of dancing. However, this just isn’t true, as the dancing scenes only comprise a small portion of the film.

However, just because there aren’t that many of these scenes doesn’t mean the ones that are there aren’t extremely uncomfortable and, at times, downright disgusting. The girls are shown dancing in a way that is completely unfitting for children their age. At times, the camera lingers awkwardly on suggestive parts on the girls’ bodies, which was completely unnecessary. It’s just gratuitous shock value without substance, and it does more to harm the message than to help it.

Throughout the film, however, the director makes it very obvious that this type of behavior isn’t good. Even other characters in the film are put off by the actions of the young girls, such as Amy’s cousin that she awkwardly tries to seduce in order to keep the phone she stole from him.

The message that the film conveys is positive. The film expresses that young girls are susceptible to social media’s portrayal of women, and therefore, we must be careful in how we portray them. It also conveys a message that a lot of this harm has already been done. It serves as a reminder of what can (and has) happened.

However, this message can be clouded by the shock value of the more provocative scenes. The director would have benefited from being a bit more modest, as the message could still have been conveyed this way.

With this all in consideration, Spinnaker would rate this film a 2.5 out of 5 sails.