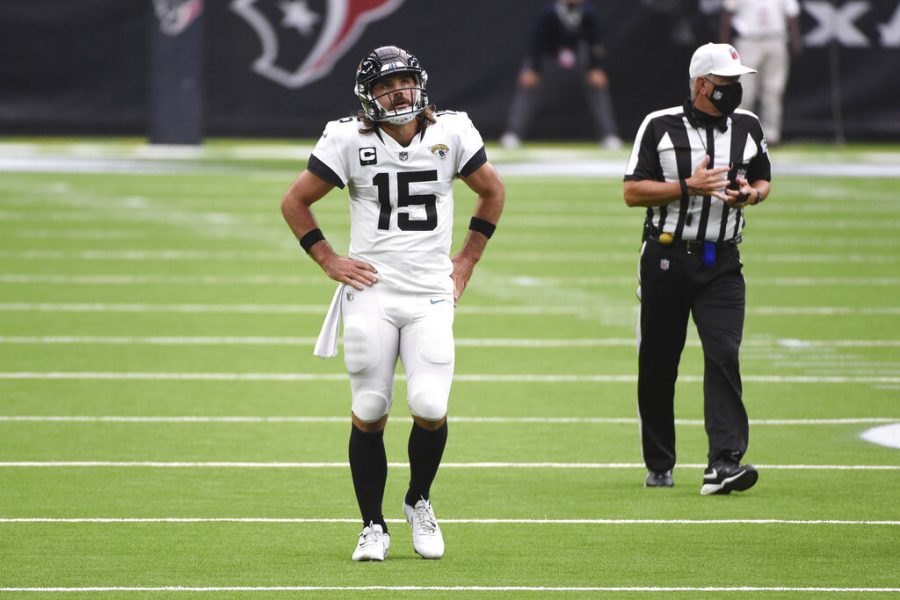 Jacksonville Jaguars quarterback Gardner Minshew (15) walks off the field after failing to make a first down against the Houston Texans during the second half of an NFL football game Sunday, Oct. 11, 2020, in Houston. (AP Photo/Eric Christian Smith)

Every week, Jaguars fans are hopeful to go to sleep on Sunday night with a win under their belt and a smile on their face. However, the Jacksonville Jaguars continue to disappoint, and this week’s 30-14 loss proves that Jaguars fans may be a little too hopeful for the team’s immediate success.

So what the heck happened in Houston yesterday? The Jaguars defense has continued to underwhelm all season long and key players were not able to play against a talented Houston offense. CJ Henderson, Miles Jack and Josh Allen were all inactive for the game and the Texans were able to put on an offensive clinic while putting up 30 points.

On the offensive side of the ball, quarterback Gardner Minshew did not have a bad day. Completing 31 of 49 passes while putting up 301 yards of passing and two touchdown passes is considered a good day in this league. He was able to throw zero interceptions and shined among his fellow players. Rookie running back James Robinson had a tough day against a defense led by star player JJ Watt. Robinson ended up with only 13 carries for 48 yards and lost a crucial fumble on fourth-down.

How did the Texans score points? With Houston firing their head coach Bill O’Brien just days ago, there was a new look on the sideline with interim head coach Romeo Crennel. Crennel was able to have a field day and managed to put his team in the win column. While Watson did throw two interceptions, he connected on three touchdown passes and was able to put up 359 yards of passing. WR Brandin Cooks ended up having a career day catching eight passes for 161 yards which included a 28 yard touchdown.

The Jaguars have a lot to figure out in the next few weeks in all aspects of the game. The team that won their week one affair against a good Indianapolis Colts franchise will have to return to the drawing board after this game. Will that include the firing of Doug Marrone? Will star kicker Josh Lambo be back next week? Will the defense step up to the plate? Who knows at this point.

The Jaguars will yet again face a team with a losing record next week as they return to the 904 to take on Matthew Stafford and the Detroit Lions. Let’s hope for more smiling faces in Jacksonville and a Jaguars win on gameday.