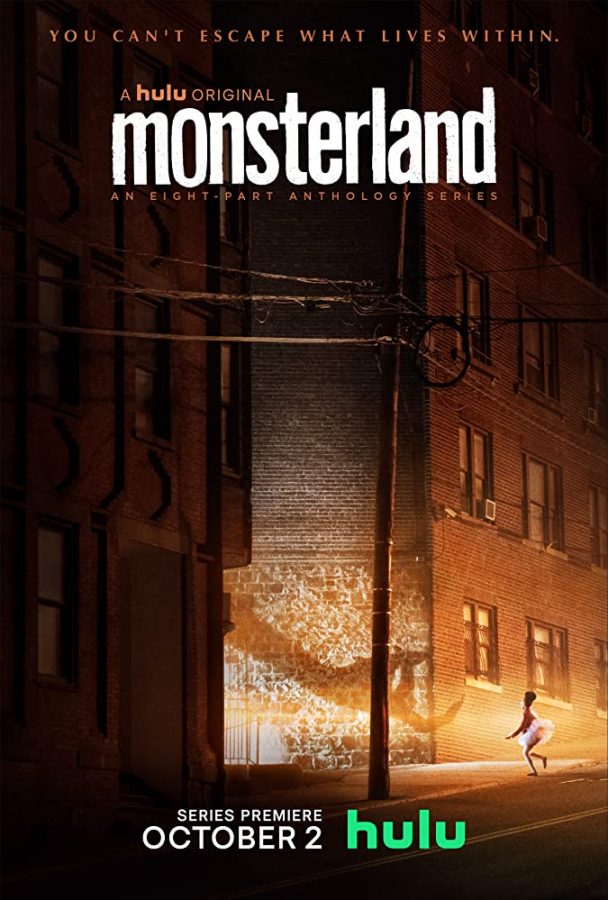 Hulu’s latest horror series brings the thrills and chills with its terrifying creatures—but not without a dose of real life horror to go with it.

“Monsterland” is an anthology series released on Hulu on Oct. 2. Created by Mary Laws, the series is adapted from the short story collection “North American Lake Monsters: Stories” by Nathan Ballingrud. Each episode is set in a different city and state, and focuses on characters that are (mostly) unrelated to one another.

One of the most charming aspects of the show is the unique title card that every episode gets. Each is creatively related to the topic of the episode. As the 8-episode season goes on, it gets exciting to see what the next title card will have to offer.

Kaitlyn Dever starts the series up right with the story of her character Toni and her child Jack. This episode explores the difficulties of being a young single mother. Toni’s life, however, is turned upside down when she meets Alex, played by Jonathan Tucker. The story is terrifying, but also extremely depressing.

This a theme that continues throughout the show. At times, it’s easy to forget that monsters even exist. More than anything, the viewers are confronted with the horrors of life. Poverty, abuse and loss are just some of the topics covered in the series.

As riveting as these storylines are, it can leave a bit to be desired in the horror aspect. With a title such as “Monsterland,” one might expect to see a bit more monsters than what are shown in the show.

However, what redeems this is that the monsters that were featured were incredible. In an effort to keep this review spoiler free, readers must find this out for themselves. A couple of episodes in and you’re still not convinced? Just wait until episode 4, “New York, NY.”

What brings this series together is the finale. While Kaitlyn Dever’s was seen briefly in episode 3, “New Orleans, LA,” she takes on a more integral role in the finale. She may not be a main character in the episode, but her appearance was profound and had a sense of finality to her character. The performances of Mike Colter and Adepero Oduye as grieving parents Brian and Amy are heartbreaking, but at the end, incredibly meaningful and fulfilling.

Other notable performances come from Taylor Schilling and Roberta Colindrez in episode 5, “Plainfield, IL” as they play the role of married couple Kate and Shawn respectively. This episode touches heavily on mental illness, but it has quite the creepy twist.

Another (somewhat unexpectedly) endearing quality of the show is the cliffhangers. Although usually annoying, this show employs cliffhangers in a way that just really makes you think about what you just saw. It’s highly interpretive and leads to some great discussions, as theories abound.

All in all, “Monsterland” is the kind of show that you really need to see for yourself to make a proper judgement. It’s not for the faint of heart, or those easily depressed, but if you’re up for a watch, it’s incredibly rewarding.

The Spinnaker rates this series 4 out of 5 sails.