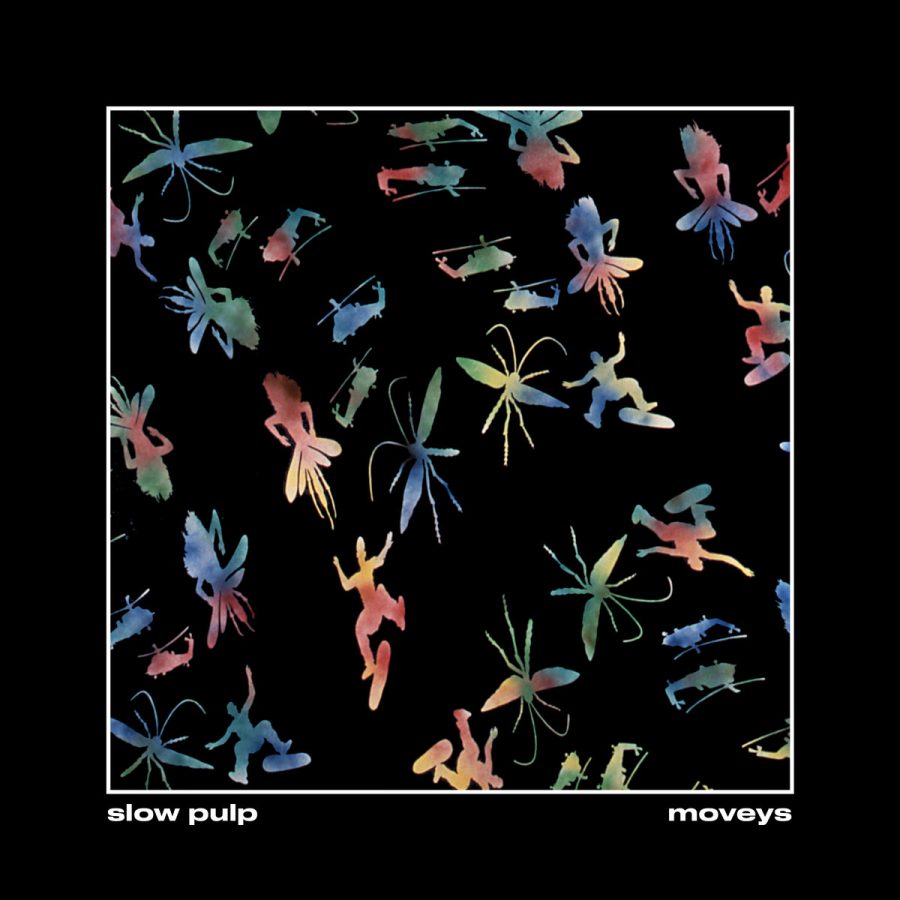 With all the chaos that has unfolded this year, music has acted as a soothing pastime  throughout the months. Chicago indie rock band, Slow Pulp, shares that calming sound in their recently released album.

The band is made up of four Wisconsin natives: singer and guitarist Emily Massey, bassist Alex Leeds, drummer Teddy Matthews, and guitarist Henry Stoehr. Though they started in Madison, Wisconsin with a shoe gazey sound, the band moved to Chicago to dive deeper in the music scene. Released on Oct. 9, “Moveys” is their debut album.

As with most people’s lives this year, the band members have faced trials of their own all while trying to produce this first album. The lyrics explore themes of love, loss, and like the title suggests—movement. It’s a calming album with just enough rock to keep you content on a crisp autumn day.

“New Horse” – The opening track starts with the placid strumming of an acoustic guitar. Slowly, it builds up to Massey’s gentle vocals as she sings about the progress she’s made through facing troubles of her own. Her voice reminded me a lot of Soccer Mommy upon first hearing it. In an interview with Apple Music, she states, “But this song just represented the first time I felt like I can do this, like I don’t have to be depressed all the time.” With physical illness of her own during the album-writing process, followed by her parents getting in a car accident right before quarantine, Massey has seen a lot, but managed to create touching music in spite of it all. I think this shows the cathartic energy creating art brings to people’s lives.
“Trade It” – One word that comes to my mind when I listen to the lyrics of this song is “resilience”. With lyrics like, “For it’s honest / I’m all I have / I’m coming to take it back,” it might sound like Massey is talking to someone who’s done her wrong, but actually it’s herself. Sometimes we can say pretty hurtful and discouraging things to ourselves, so it’s important to recognize the progress we’ve made and unlearn harmful habits. Massey says, “The instrumental is one of my favorites in the record.” The instrumentals sound very similar to that of an interlude or opener in an early 2000s movie. One can picture the romanticized suburbia with the sound of harmonious guitars and soft drums.
“Idaho” – The song opens with what sounds like the whirring of nearby skateboard wheels as the drums and guitar starts. From the previously mentioned interview, Massey states, “I think the song is about trying to accept other people’s love and kindness when you don’t love yourself.” The song definitely has that classic indie rock sound, soft and sad, but in a gentle way.
“Track” – In an interview with “DIY Mag,” members Teddy and Alex mention how the Backstreet Boys were some of the early inspirations, and I feel the intro to this song points to that. It has a fun-pop feel before it dives back into indie rock. The message behind the song is extremely personal. Massey said it’s for her mom to let her know that no matter what, she and her family will always be there for her. She specifically wrote lyrics like, “Do you recall my name / It’s ok I’ll stay / Love you the same,” because Alzheimer’s runs in the family, and she wants her mom to know she will love her even if her memory fades.
“At It Again” – This track was written collaboratively by Stoehr and Massey. Though the instruments and harmonies sound pretty upbeat, Massey says, “the ‘it’ in this context is depression.” Since part of the song was written during the height of quarantine, it’s understandable that such themes would appear throughout the song. I feel like many people can relate to falling back into depressive periods because of the stagnant day-to-day life of being inside.
“Channel 2” – This is the first track on the record sung by someone other than Massey. Leeds takes the lead on this song, and explains to Apple Music that, “We had started to play it live back then, but it was a pretty different song,” which reminds me of the newness of their band. I love hearing local artists in my area talk about how their songs evolve with each performance, so it’s cool to hear that coming from a band across the states that’s on the rise. This song also has a guitar solo that I’m sure is amazing to witness at a live show. My favorite line comes from the opening verse, “Concentration takes up all my time.”
“Whispers (In The Outfield)” – The seventh track is purely instrumental. The beautiful piano piece is a collaborative effort of Massey’s dad and Stoehr. Because of Massey being home during part of the recording process, it was fitting to have her father, who is a professional musician, add to the album. It’s a nice transitional piece as listeners near the last third of the album.
“Falling Apart” – This is another song where Massey is singing to herself. She reflects on experiences of years past and why it’s so difficult to show emotions now. There’s part of the chorus that goes, “You don’t wanna take the time / You just got to be alright.” In the interview with Apple Music, she says, “I take a long time to process trauma and emote about it. I think it gets to a point where it’s a little bit frustrating, because I want to cry, I want to think about it in a healthy way.” I think this is a common theme in the stages of grief or dealing with trauma, being at a point where you want to express emotion, but can’t. The slightly country-sounding strings in this song do a good job of expressing a different feeling for this song.
“Montana” – I like that this song continues with the slight country vibes from the previous songs. It’s fitting for the title, which I picture to be Western in the sense of cowboys and ranches. The instrumentals in this song sound perfect for sitting on a porch swing watching lightning bugs fly by. Even Stoehr states, “We switched it to downtempo, made it a lot sludgier. It feels a little more like a country song.”
“Movey” – The final track is the perfect boogying tune. It’s funky, fresh, and consists of a combination from Stoehr’s tape machine. Matthews said to Apple Music, “It feels like some way of thinking about emotions being transient and just shifting a lot of the time. Movement was a big theme across the record in general.” It’s a sweet and unexpected ending to the indie rock album.

I think the release of this album matches perfectly with the season. It has a pretty calm overall sound that goes with the slowed down pace of autumn. Knowing that the entire album was recorded and produced independently really gives it that “indie” stamp of approval. I admire that the musicians were able to work through the difficulties of the pandemic and record from two separate states. Though the songs are short and fairly simple sounding, they’re filled with heartfelt lyrics that read like poetry. Because of that, I give this album a four out of five Spinnaker Sails.

I would have liked to hear a little bit more depth throughout the first half of the album, but I like the versatility of the latter half. I’m looking forward to seeing Slow Pulp gain traction and hear what they come out with in the future. If you like Phoebe Bridges, Soccer Mommy, or the sentiment behind Bright Eyes lyrics, I recommend giving this album a listen.