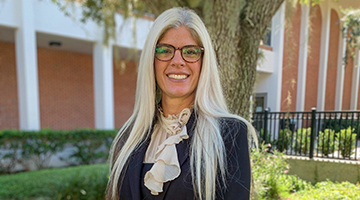 Governor DeSantis has appointed UNF Deaf and Interpreter Education instructor June Ann LeFors to the Florida School for the Deaf and Blind (FSDB) Board of Trustees (BOT).

“The opportunity to serve on the board is a distinct honor and privilege, and I look forward to providing not only the deaf/hard of hearing perspective but also contributing my perspective as a parent, educator, interpreter, translator and consultant,” LeFors said.

LeFors previously worked at the FSDB for a decade, enduring multiple roles. She functioned as a preschool teacher in the Early Learning Center, a parent advisor in the Parent Infant Program, and an ASL specialist and evaluator.

LeFors earned her bachelor’s degree in elementary education at Gallaudet University and got her master’s in deaf education from Lamar University. Besides working at UNF, LeFors also works as a freelance deaf interpreter and ASL translator in the northeast and central Florida areas. She is also a member of the Early Hearing Detection and Intervention Advisory Committee for the Florida Department of Health.

Spinnaker asked LeFors what brings her joy in working.

“I aim to contribute to the growing number of organizations generating awareness about and educating the public of the importance of giving all children – deaf/hard of hearing, blind/visually impaired and deafblind – full access to language.”

She says in her years of working in the education field, it brings her much satisfaction to see a deaf/hard of hearing child acquire language at a very young age.

LeFors went on to explain how, according to the Modern Language Association’s 2016 study of US colleges and universities, American Sign Language is the third most-studied language — outnumbered only by Spanish and French. She believes that this means that when a Deaf child starts understanding ASL and using it to learn and engage in meaningful discourse from a young age, that child is set for life success.

“That’s what brings me the utmost joy,” Lefors said.

Established in 1885, the FSDB is an accredited state public school available at no cost to eligible pre-K and K-12 students residing in Florida who are deaf/hard of hearing, blind/visually impaired or deafblind. Nationally recognized for its specialized educational programs, services and advanced technologies, the FSDB serves a little over 1,000 students each year.

“Drawing on my background and experience working with deaf/hard of hearing students at FSDB – they benefit from direct instruction in ASL and they are able to interact directly with peers like themselves and benefit from adult role models, which in turn creates rich opportunities for academic achievement/success.”

LeFors says deaf/hard of hearing students search to understand and appreciate their Deaf identity, and create lifelong friends who eventually become their family.

“Students at FSDB who are blind or deafblind have parallel benefits and experiences. FSDB is indeed the only school of its kind in Florida and I personally think every child – deaf, blind, or deafblind – should have at least an opportunity to visit and experience FSDB,” LeFors stated.