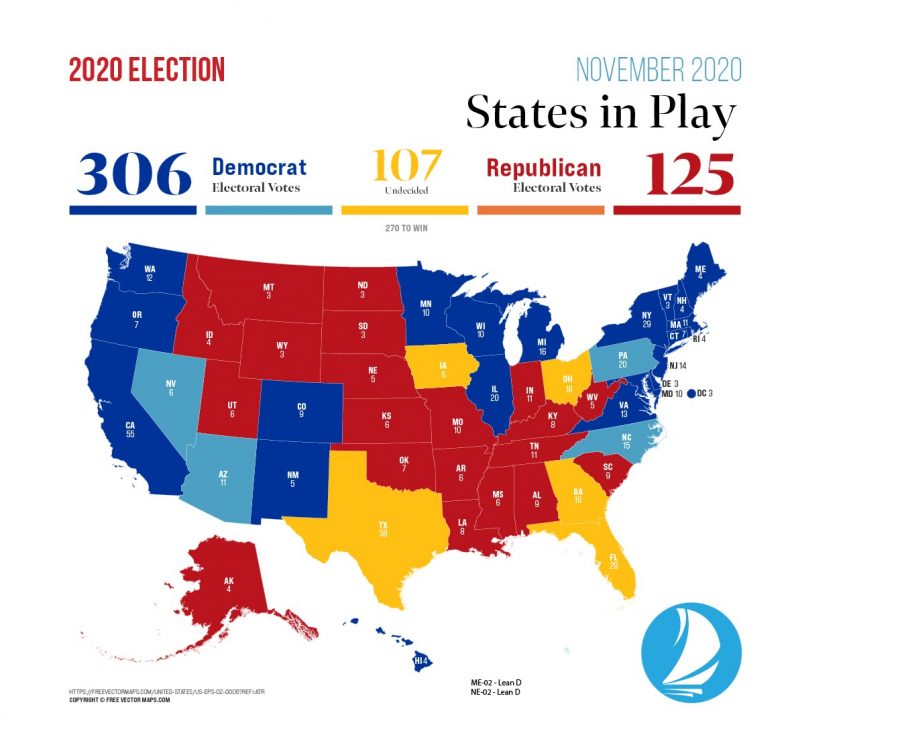 It’s Nov. 2, 2020 and the election is tomorrow. It’s been a long and arduous election season, in which many Americans have been glued to their television screens. Tomorrow night, several hundred million Americans will crowd around their screens, watching the results trickle in on who will lead this country for four years.

Oh boy, what can be said about Florida? It’s the perennial swing state. FiveThirtyEight’s forecast has Biden slightly favored to win Florida. Their simulations put the probability of a Biden win at 64 in 100, and their polling averages have Joseph R. Biden Jr. ahead by +1.9 (as of Nov. 1, 11:18 AM.)

Florida is a tossup in that the polling averages are so close. One would want to be in Biden’s position as of right now, but 36 in 100 is not impossible. President Trump is competitive in Florida, as evidenced by a recent poll by ABC News/The Washington Post which gives the president a +2 advantage in Florida.

Democrats are ahead of Republicans by 1.1% in early voter turnout as of the morning of Nov. 1 according to the U.S. Elections Project. It should be cautioned, however, that early voting statistics are not representative of the final result. There’s still an election tomorrow, and a large turnout from Republicans could tip the scales into the president’s column.

Ohio is as confusing as Florida this year. In the FiveThirtyEight forecast, the probability of either candidate winning is 50 in 100. This forecast has the vote share in Ohio as 49.5% for both candidates, which would possibly put the race into recount territory. In the FiveThirtyEight polling averages, President Trump is ahead by +0.2. Emerson College released a poll that shows Biden ahead by 1 point. Fox News also released a poll that shows the president ahead by 3 points among likely voters. No person can really say where Ohio will go this year.

Georgia is a tossup in that the polling averages only give Biden a +1.6 advantage and the forecast only gives Biden a 58 in 100 chance of winning. For most of the race, the president was favored to win Georgia. However, around Sept. 28 is when President Trump’s probability of winning started to decline. Biden took the lead in Georgia around Oct. 26. In polls released by Monmouth University, Biden leads in Georgia by 2%, 4% and 5% respectively. However, FiveThirtyEight’s forecast has the projected vote share on Nov. 3 to be a margin of 1% in favor of Biden. If Democrats want to flip Georgia, they need a large turnout of Black voters (who predominantly vote and identify as Democratic) and suburban voters, specifically those in the Atlanta suburbs.

Iowa is a tossup in that President Trump is leading +1.8 over Mr. Biden in the FiveThirtyEight polling averages. FiveThirtyEight’s forecast gives President Trump a 65 in 100 chance of winning Iowa, with a vote margin of 2.1% in favor of the president. President Obama won Iowa twice in 2008 and 2012. However, Iowa had the most abrupt rightward turn out of all 50 states in 2016, more than 13 points towards the GOP. Could Biden replicate President Obama’s victories in Iowa in 2020? Possibly. If Ohio goes Democratic and Biden overperforms in Minnesota and Wisconsin then it would be reasonable to see Biden overperform in Iowa and possibly carry it. The Economist’s forecast shows that Iowa has a strong correlation in voting behavior with both those states, which is a score of 82 for Minnesota and Ohio, and 84 for Wisconsin. However, it’s not a big prize. It’s only 6 electoral votes, so the Biden campaign is not paying much attention to it.

Texas is also a tossup. The reasoning behind this change is that the Cook Political Report recently moved Texas from “lean Republican” to the tossup column. In the FiveThirtyEight polling average, President Trump is only ahead by +1.1. In their forecast, the projected vote share is 1.8% in favor of President Trump. 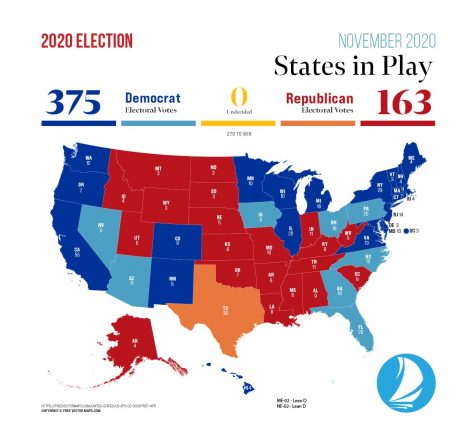 The rust belt has firmly been in Biden’s column the entire race. FiveThirtyEight’s forecasts have Biden leading in these states. Michigan at 95 in 100, Pennsylvania at 85 in 100, and Wisconsin at 94 in 100.

Siena College/New York Times Upshot polls put Biden up 11 points in Wisconsin, 6 points in Pennsylvania and 8 points in Michigan. While Pennsylvania is closer than the other two, it would take a much larger polling error than 2016 for Trump to win. Pennsylvania is favored to be the tipping point, which is the state that puts either candidate past 270 electoral votes. Both campaigns have spent considerable resources in Pennsylvania. However, it’s lean is Democratic because of the strong lead Biden has had throughout the election. The American people, however, should not expect the full results from Pennsylvania on election night. It’ll most likely be somewhere around Thursday and Friday of this week. Half of Pennsylvanians are expected to vote by absentee ballots, but those cannot be processed until 7 AM on Nov. 3. On election night, it’s likely to look like Pennsylvania is skewing towards Trump, but as the absentee ballots are counted, we can expect a blue shift.

In a Siena College/New York Times poll, Biden is ahead by 6 points. The FiveThirtyEight forecast has Biden’s chances of winning Arizona at 72 in 100. The expected result in that forecast is 3.1 points in favor of Biden. The polling averages put Biden ahead by +3.4. It’ll be a close race, but Biden will be the likely victor in Arizona.

Biden is slightly favored to win North Carolina, with a 67 in 100 chance of winning according to FiveThirtyEight’s forecast. The polling averages put Biden ahead by +2.3, and several polls released by A+ pollsters have Biden’s lead anywhere from 3% to 6%. Biden has had a small but consistent lead in the Tarheel State for most of 2020, but we’ll see on election night.