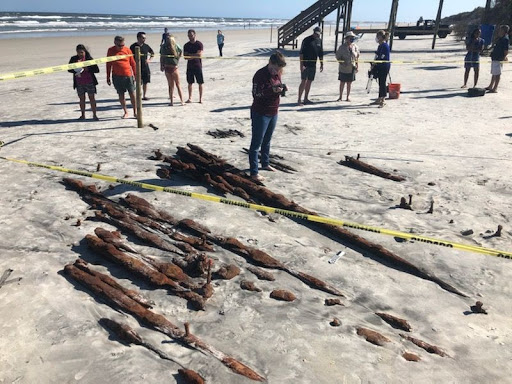 Adjunct professor, and Public Relations Communications Specialist for the St. Augustine Lighthouse and Maritime Museum Dr. James Smith gave an interview with Spinnaker and revealed what the organization has uncovered so far.

LAMP was immediately notified when the ship was discovered and came to the site to do an initial survey, all on the same day. Dr. Smith explained how beach erosion has gradually revealed the wreck, but it does get slightly reburied with high tide, making the LAMP team’s job more difficult.

Dr. Smith also gave some information about what the team has found out about the wreck. He explained how the ship was very large, so the team didn’t know what part of the ship they were working with at first. It was just Tuesday morning when the team discovered what might be the stern—the back of the ship. The wreck itself is lying on its side, with the bow, or front, facing the ocean, and the stern facing the beach.

One of the most important questions the team had was whether or not the ship was American. The measurements of the wood had been made in inches, which means the ship must have been built in the United States, Canada, or Great Britain. However, certain planks were curved in a certain fashion indicative of U.S. ships of the period, so it is likely an American ship. In the logs in the museum, there is mention of a ship, about nine miles south of the final wreck, on August 29, 1879.

As for the history of the ship, the team searched other records, and were eventually able to find a keeper’s log and newspapers from 1880 which indicate that a ship named “Caroline Eddy” was reportedly shipwrecked in the area, and was hauling a heavy load of lumber. Dr Smith explained how the ship had likely left from Jacksonville, but was forced south and broke apart off the coast, but all of the crew swam ashore and survived.

As for the future of the wreck, Dr Smith elaborated how they had no plans to remove the wreck, and would like to leave it there, while also safeguarding it from other people attempting to disturb it. He also described how they had taken samples of wood from the ship and sent them to an expert at Flagler College, with the hope of determining the date it was built. The team also hopes to analyze and measure the whole wreck, so they will be able create a 3D model of it, and figure out its size.