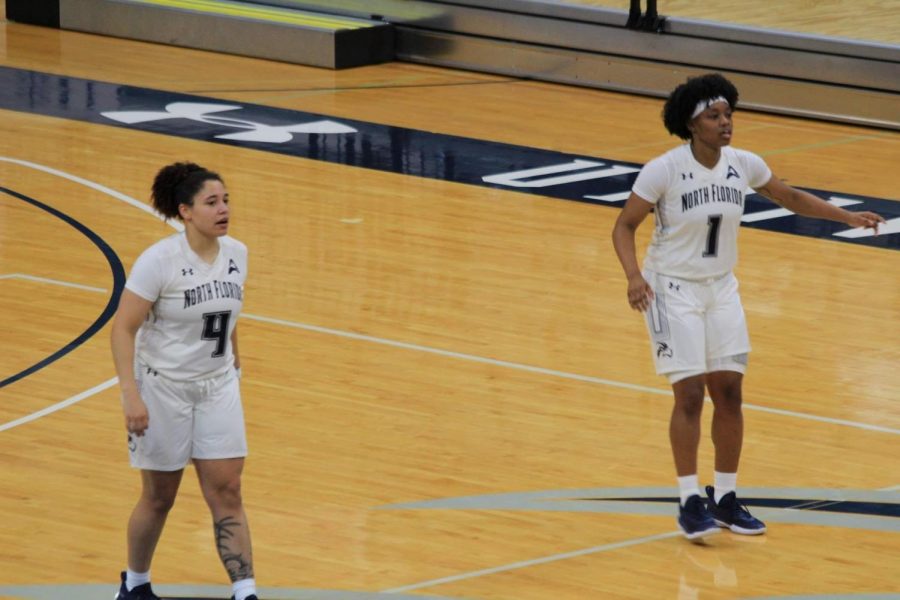 More than a week removed from their last outing, the Lady Ospreys took the court Sunday to face Edward Waters College. This UNF group was coming off of their first win of the season, but the long break in between games posed a potential threat. Would the Ospreys be able to keep things rolling with a win over the EWC Tigers?

The major storyline early on was the absence of forward Jazz Bond, who broke the all-time UNF record for blocks in a career against FIU on Dec. 3. When asked, head coach Darrick Gibbs cited injury concerns as the reasoning.

“[Jazz Bond’s] had a nagging shoulder injury all year,” Gibbs said postgame. “She’s been playing through it and we’ve taken a stance of trying to rest her and get her ready going forward. We’ve been told that the only remedy to her situation is rest, so we’re trying to do that now and give her as much time as we can so she can be ready… especially for conference play.”

The Ospreys got off to a very hot start, something that would prove to stunt any chance of an upset win for EWC. The Tigers implemented a full-court defensive attack, but this led to many open looks for the Ospreys down the court. UNF guard Marissa Mackins picked up right where she left off, hitting all six of her attempts from beyond the arc. Efficient offense, along with stout defense, led to the Ospreys controlling a 20-4 lead at the end of the first quarter.

The second quarter started with a scare, as EWC’s Molly Ragle hit the deck, appearing to have hit her head. Fortunately, Ragle continued to play the remainder of the game. The Tigers had a much better offensive performance in the second quarter, but the UNF scoring machine did not slow down any. This would be a constant theme throughout the afternoon, as the Tigers found themselves in a hole too deep to climb. Despite scoring just two points less than the Ospreys in the second quarter, EWC went into the half down 41-23.

Freshman forward Summah Evans kicked off scoring for UNF in the second half, extending the lead to 20 points. The two stars of the second half were without a doubt Marissa Mackins and Emma Broermann. Mackins continued on her reign of terror from three, posting 27 points in total. However, it was Broermann who caught everyone’s eye. The Ohio native shattered her previous career-high with a 26 point performance, grabbing 11 rebounds along the way. Broermann spoke about her career game after the contest.

“It felt really good,” Broermann said. “I’ve gotta give it to my teammates… They work hard to get me the ball. So, as long as I seal the deal and do my job down low, I know they’ll get me the ball and have confidence in me to make the shot.”

The Ospreys ultimately dominated en route to a 93-35 win, boosting their record to 2-3 on the season. The added momentum will be key, as they will hit the road to face off against SEC opponents Auburn and Florida. These games will be no easy task, especially without leader Jazz Bond, but another performance like today could give these bigger programs a run for their money.

Coach Gibbs noted after the game that the team is improving and praised his team for their performance today.

The Ospreys head to Alabama to take on the Auburn Tigers on Dec. 17 at 7 PM. Following this, UNF heads to Gainesville to take on Florida on Dec. 22 at noon. Both games can be viewed on SEC Network+. Follow along with Spinnaker Sports for leading coverage in UNF basketball.