Ospreys heat up from beyond the arc, roll past Edward Waters 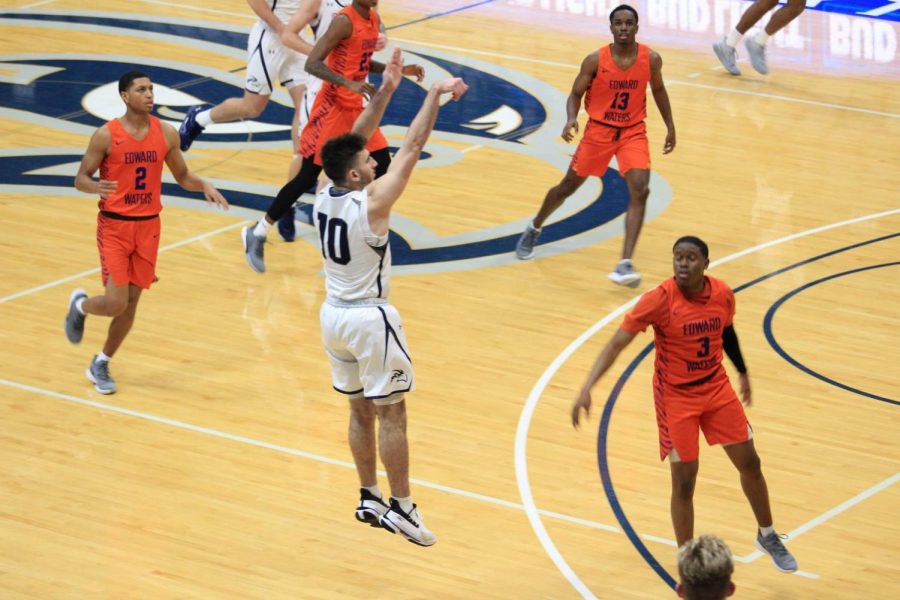 Coming off of a rough loss to Division II Flagler on Saturday, the UNF Ospreys had a lot to prove. The opportunity to bounce back was present as they faced another non-Division I opponent, the Edward Waters Tigers. Luckily for the Ospreys, this Monday night matchup proved much more successful.

UNF got off to a fiery start, with early threes going in courtesy of guard Emmanuel Adoboyin and forward Josh Endicott. Threes would be a critical component for the Ospreys, sinking 15 treys throughout the game. UNF was able to use physicality early on to dominate the rebounding battle. The Ospreys controlled the paint, both offensively and defensively.

One key to the successful first half for Matthew Driscoll’s squad was production distribution on the offensive end. Unlike the last game, many Ospreys got involved in the scoring column and the game’s overall flow. This trend would continue for the rest of the game, with 10 players scoring in the contest. Out of these contributors, five posted double figures.

While there were plenty of dunks in the first 20 minutes of play, the highlight of them all was easily an impressive alley-oop lob from Adedoyin that was thrown down by forward Jonathan Aybar.

A strong start contributed to a 53-32 to lead the half for the Ospreys. While high-flying dunks stood out in the first half, the second half’s biggest story was by far the three-point shooting by UNF. It seemed like just about anything the Ospreys threw up from beyond the arc was going in. The Osprey’s range was paralyzing to the Tigers, as this continually expanded the already large deficit.

At the nine-minute mark in the second half, UNF forward Jonathan Aybar fouled out after contributing nine points and six rebounds. After the Flagler loss, head coach Matthew Driscoll stressed the importance of Aybar to the team in his postgame press conference.

However, he cited his inability to stay out of foul trouble as a critical hindrance to his game.

“He doesn’t want to foul, and he’s trying really hard to learn the differences, the nuances, and the way that things are refereed,” Driscoll said. “Jonathan Aybar and I sat down today and had a long conversation about that particular scenario: what he means to us on the floor and how important he is on the floor. We’re really trying to help him through positioning, the ability to be at the right place, so that he’s not late getting to the party and the [offensive player] makes an awkward move, and now it’s a foul. He’s going to get better, and he’s going to grow. It’s just unfortunate that it happened in back-to-back games.”

An all-around performance led to a 98-71 win for the Ospreys, which is only their second of the season. The score is a bit misleading, as the starters came out of the game towards the end, and Edward Waters stopped the UNF scoring attack.

Forward Josh Endicott led the team on the stat sheet, scoring 18 points and grabbing 11 rebounds. When asked about how something like a double-double performance can help motivate himself and his teammates, Endicott said he just wants to win games.

Monday’s win was a great way to end the calendar year for the Ospreys. Many positives from last night’s game can give fans hope as the team enters conference play. The next match for UNF comes on New Year’s Day when they take on the Stetson Hatters in DeLand.

Follow along with Spinnaker News for leading coverage on UNF basketball.