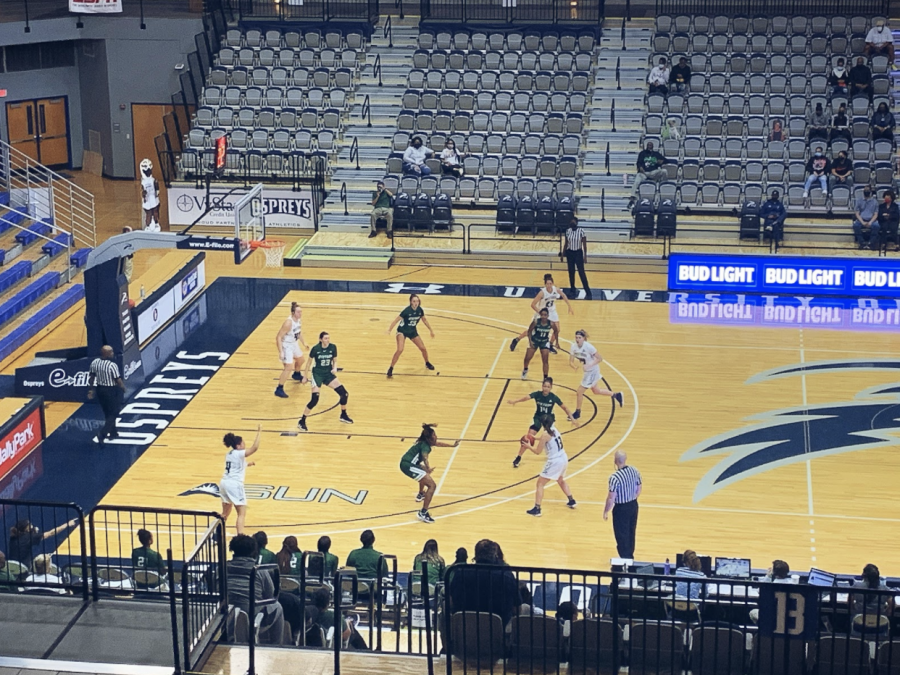 Basketball tipped off at UNF Arena for the first time in 2021 as UNF women’s basketball hosted the Stetson Hatters in the first of two games this weekend. The new A-Sun conference schedule calls for two games during the same weekend to minimize travel amongst the COVID-19 pandemic.

Non-conference play didn’t go as the Ospreys would have liked, carrying a 2-5 record into the A-Sun slate. However, Saturday’s matchup with in-state foe Stetson provided an opportunity to get things rolling. The game started with a Stetson three-pointer, but this would be the only lead the Hatters held for the rest of the game. The first quarter’s highlight for the Ospreys was strong defense, only allowing 11 points through the first 10 minutes.

Head coach Darrick Gibbs highlighted the importance of this strong start on the defensive end.

“It’s huge,” Coach Gibbs mentioned in the postgame ZOOM meeting. “Any time that we can start that way, we obviously put the challenge on our first five to go out there and set the tone defensively, along with execution on the offensive end.”

The strong defense would fall off a bit, with Stetson having a much more productive second quarter. Despite this, the Ospreys were very successful from beyond the arc, hitting seven threes in the first half. Junior guard Marissa Mackins led the team in this category, going on to hit five three-point shots on the day. With these shots going down, the Ospreys were able to take a 42-30 lead into halftime.

The second half would begin with a three-pointer courtesy of UNF forward Jazz Bond. The redshirt senior had a very efficient day, scoring 23 points in 24 minutes of play. With injury concerns earlier this season, it is a promising sign to see such significant contributions from Bond.

A key theme in the game was the early lead that the Ospreys built. Stetson strung together a solid performance after the first quarter, but the Hatters could never truly get back into the game. Stetson would make runs to reduce the deficit, but these attempts just weren’t enough. UNF held the lead it had compiled early on and picked up a 90-73 win.

Distribution of scoring was a significant component in the win, with four Ospreys posting double figures in scoring. Jazz Bond, being one of these four, spoke on this after the game.

“Having people to come off the bench and produce like that really helps us and gets us going,” Bond said. “Also, it allows other teammates how they can also come in and produce.”

The Ospreys return to UNF Arena on Sunday to face Stetson yet again. This matchup will be critical, as a potential series sweep hangs in the balance. Coach Gibbs highlighted some keys going into the back-end match in the opening series.

“I think offensively, we were really good,” Coach Gibbs said. “There’s some things we’ve got to clean up in regards to our spacing and some of the decisions that we made. But offensively, I thought we were really good. We shot the ball 56 percent from the field, 46 [percent] from three, 76 [percent] from the free throw line. We’ve just got to clean up some things on the defensive end of the floor and how we guard some of their action and some of the adjustments they made throughout the game.”

With a win tomorrow, the Ospreys can advance to 2-0 in A-Sun play and situate themselves atop the standings. The game will tip-off at 2 PM and can be viewed on ESPN+. Follow along with Spinnaker News for leading coverage on UNF basketball.