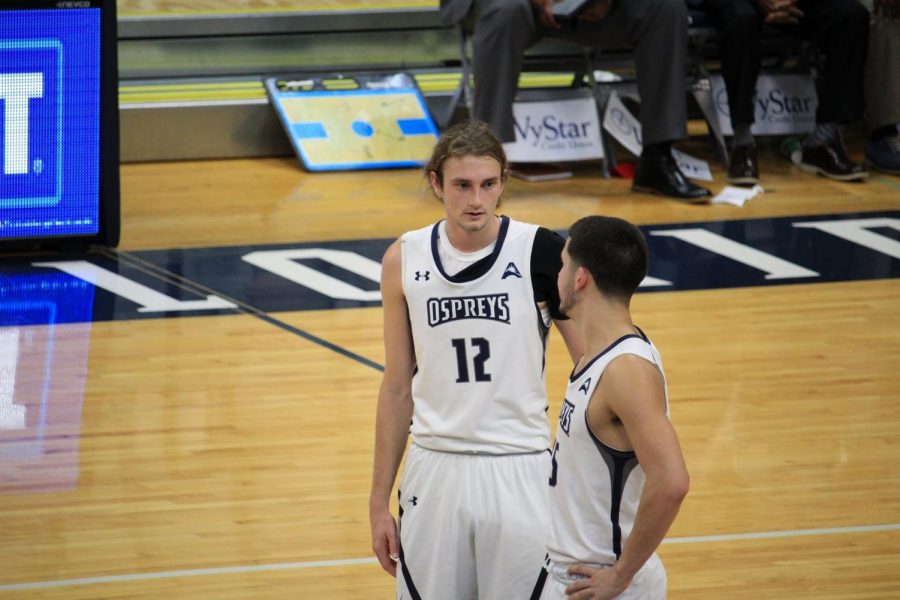 It’s that time of year. The first installment of this season’s River City Rumble took place at Jacksonville University as UNF MBB faced off against the rival JU Dolphins. After sweeping all three games of last year’s series, this feat would prove to be a much more challenging task this year.

The critical storyline coming into this matchup was the return of veteran UNF forward Carter Hendricksen, who had missed the previous seven games due to a foot injury. While a break like this would likely cause a bit of rust for most, this was not the case for Hendricksen. The Kentucky native got the scoring started for UNF and would shine throughout the entire game.

Early on, it was apparent that fans would be in for an exciting game. Despite both teams committing mistakes, the foes were locked up throughout the first half. The Dolphins were getting to the free-throw line but were not able to fully capitalize. Because of this, UNF secured a solid lead coming into the closing minutes of the first half.

In typical River City Rumble fashion, this lead wouldn’t last. The Dolphins put together a 7-0 run, leading to a 34-32 lead at the half for JU. The first 20 minutes of play were full of action, but there would be a noticeable drop off in energy level in the second half. An unpredictable season, along with the fast-paced first half, was likely the cause of this.

UNF guard Jose Placer got the Ospreys on the board, bringing the deficit down to one point. This is where things started to go south for UNF, as JU forward Dontarius James began to heat up. James would have the most impressive performance in the game, posting a 30 point performance.

While the Dolphins were able to stretch their lead to nine, they could never put the Ospreys away. As the clock ran, UNF made one last run at JU. A three-pointer courtesy of guard Emmanuel Adedoyin brought the Ospreys within three. The sophomore followed this up with a layup; the deficit was down to just one point.

Down one, the Ospreys got the ball back with around 30 seconds remaining. Time stood still as a pass made its way to an open Carter Hendricksen, who proceeded to drill a clutch three-pointer, giving the Ospreys a two-point lead. However, the Dolphins still had plenty of time to assemble one more possession. JU guard Kevion Nolan took matters into his own hands, knocking down a three-pointer of his own.

This death sentence of a shot, much like Hendricksen’s moments earlier, left time on the clock. A rushed possession saw UNF guard Jose Placer sprint down the floor and have a potential game-winning layup rattle out. The prior feeling of joy was long gone, as the Ospreys fell 66-65.

UNF will have a shot to avenge this loss on Saturday when they face off against the Dolphins once again. Follow along with Spinnaker for leading coverage of UNF basketball.