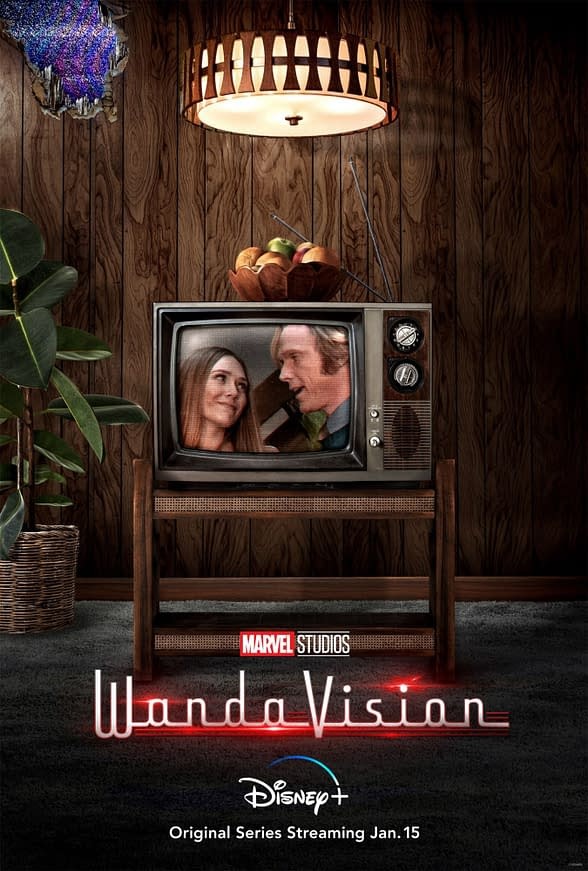 Last week on WandaVision, color entered the picture as we found our characters in a 70s style setting. Wanda is revealed to be pregnant as she and Vision try to keep up with her constantly accelerating labor stages in time to deliver their children. As you’d imagine, comedy ensues as neighbors pry into their personal lives as they try to hide this new development. But as time goes on, it’s eventually shown that there is a conspiracy in the world around them that Wanda may have had a hand in creating.

Much like earlier episodes, we find ourselves in a familiar sitcom setup where they show a lot of the classical tropes, such as designing the baby’s room, or arguing what to name the baby. They even spoof an old bath commercial. Thankfully the actors bring an energy to it that makes it enjoyable to watch. Even though Bettany and Olsen’s performances here are silly, they are so entertaining that you want to see what happens and where they’re going to take this storyline.

Once again, the production team perfectly captures the time period. This time paying homage to 70s sitcoms, such as “The Brady Bunch.” Even though the setups feel similar in tone to the previous episodes, they still change up a lot of elements to maintain consistency. Elements like the house, or the clothes, and even the vibrant openings are really well done. I also find it interesting in how the aspect ratio of the screen is used here. When we’re in the sitcom reality, the screen looks smaller much like TVs back in the 70s, but when we transition to the real world it goes full widescreen. It’s a creative way to show that something is off about this environment.

Much like with the previous episodes, there is still a lot of mystery to the characters’ situation. While the plot of this episode primarily revolves around Wanda’s pregnancy and how the characters react to it, the world around them starts to reveal itself a lot more here. Characters start to act in ways that normal people don’t act, and when they start asking questions reality cuts back to a previous scene where they forget what they previously said. It actually feels creepy when you see how it plays out on screen. Even though most of the episode is played as this comedic setup, you’ll find that there are a lot of foreboding elements, especially in the ending.

Without giving any more away, the ending to this episode reveals so much while also raising some interesting questions. Not only does it make this setup feel so uncomfortable to be in, but it also addresses some real-life issues with the characters. For example, Wanda’s mental instability. When you think about it, Wanda has been through a lot of tragedy in her life. Losing her parents at a young age, her brother and country in Avengers: Age of Ultron, and even losing Vision in Avengers: Infinity War. With all the bad things this character has gone through, it makes sense why she makes the choices she makes. Even though it’s made pretty clear that she has a hand in creating this world (or at least accepts what is going on), it still makes you wonder how deep her involvement is. Did she bring Vision back? Are the neighbors forced to live in this reality? Are they real people? I’m glad that this show addresses the mental trauma from the previous films because that had been lacking in the films and it adds many layers to these characters. It also raises a lot of moral questions.

To sum up my thoughts, I think this episode is an entertaining sit through that ends with a fantastic cliffhanger that will have you jumping out of your seat asking, “When’s the next episode gonna come out?!?” This show finally has a lot of people’s attention, so let’s see where they take the story from here.