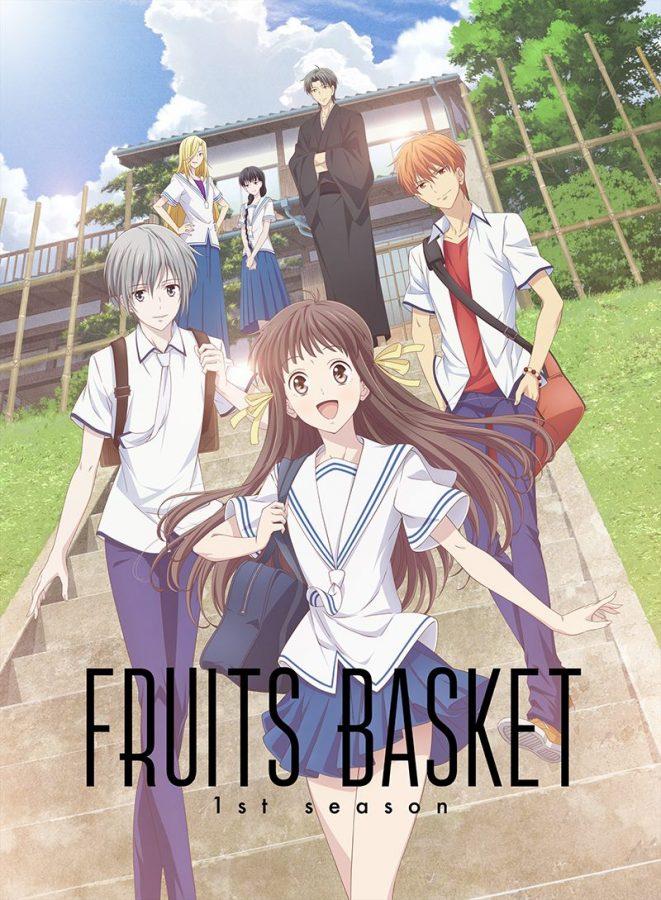 While I was passing the time in quarantine, I decided to try new things such as watching anime. While I was binge watching anime films and shows, one of the titles that kept getting recommended to me was a show called “Fruits Basket”. At a first glance, I wasn’t interested. I was unfamiliar with the series, and the unimpressive title sounded like a “Fruit of the Loom” brand. Eventually I caved in, and WOW was I wrong to judge this series solely by its title. I’m not even kidding, this anime is one of the most heartfelt, colorful, and smartest works I’ve ever seen.

The story centers on high school student Tohru Honda, whose mother passed away in a car accident and has to live with her grandfather. Renovations are being made to her grandfather’s house, which causes Tohru to live in a tent and support herself. She is eventually discovered by popular classmate, Yuki Soma, and his cousin, Shigure, who invite her to live with them. During her first day, she meets Kyo, Yuki and Shigure’s cousin, who barges in challenging Yuki to a fight. During the scuffle, Tohru accidentally falls into them and each of the Somas turn into animals of the Chinese Zodiac. It is eventually revealed that members of the Soma family are cursed to turn into their respective animals when hugged by someone of the opposite gender. Tohru promises to keep their secret and as she continues living with the Somas. As the series continues she meets more members of the Zodiac and learns about their tragic pasts, most notably how they are afflicted by the family leader Akito, who assumes the role of ‘God’ in the family curse. Her positive influence starts changing their lives for the better as she makes it her mission to break the curse.

With a plot like that, it sounds like there’s a lot to this series, and to be honest there is. Thankfully, it knows how to take its time and allow us to get invested. The biggest thing that got me hooked to this anime were the characters. It’s so rare that I say this, but the characters in this series are brilliant! What makes them so great is that they’re written in a way that they don’t feel fictional, but they feel real.

I feel like a lot of this series’ charm does come from its main lead. Tohru, in my opinion, is a perfect character. At a first glance, some people may look at her as someone who is too happy and childlike. But it works because you see all the hardships she’s gone through. This is a character who has experienced so many horrible things, such as losing her parents and having to support herself. But she still manages to keep a positive outlook on life, which is something to be admired. It’s hard to describe, but I find that aspect just so infectious. I mean that in the best way. It’s very obvious why the people in this show are so drawn to her.

In fact, each character has interesting personalities and backstories that make you want to know more about them. I was surprised at how many of them I felt for, especially with the Soma family. It’s made even more complex with the way the Zodiac curse is woven into each of their stories. Some feel afflicted by the curse, while others have resigned themselves to the roles they are in. What makes it even more interesting is how there is this level of mystery to them. While Characters like Yuki and Kyo people can figure them out pretty quickly, others like Shigure had me guessing the entire time. I had no idea of who was good or who was bad throughout a good portion of this series. That’s really rare for me. It’s also made more problematic with the way this family works and how it affects everyone involved. I was shocked with the amount of topics and issues that are brought up here. Issues such as parental neglect, family abuse, and losing a loved one, are all shown here. Elements such as this really give this anime an adult edge that help it stand out amongst other works.

I also find it interesting how even though there are mystical elements here with the nature of the curse, this series takes a more grounded approach. The plotlines mainly revolve around familiar settings like navigating through high school or going downtown with friends. This may sound ridiculous but they surprisingly work because this show is so character driven that you want to go along with it. Even the characters at the high school have some interesting personalities and backstories that I can’t think of any weaker link; they all stand on their own.

The animation, much like a lot of anime I’ve seen, is amazing. Everything from the backgrounds to the character designs is top notch. Even the soundtracks they use can create these cheerful but also somber moods. I find myself enjoying them every time I listen to them. It also helps that every time I watch this, all I can think of is wanting to go to Japan. It just seems like a beautiful place with a ton of culture that I want to see one day.

To sum up my thoughts, I really love this anime. It has great leads, a mature story, and has a lot more going for it than most people think.

“Fruits Basket” is the definition of don’t judge a book by its cover.