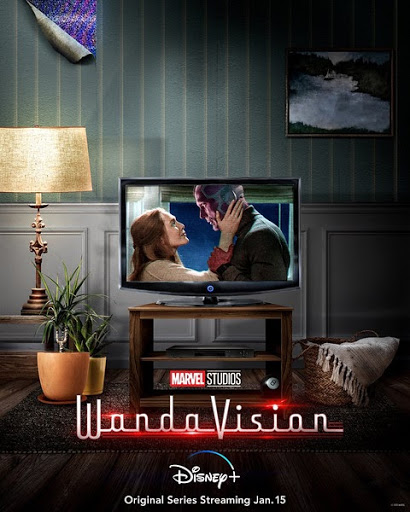 It took a while, but we’ve finally caught up to the present day on “WandaVision”.

After the events of the last episode, Wanda decides to have a day to herself while her neighbor Agnes agrees to babysit her boys, Tommy and Billy. Meanwhile, Vision finds himself in a circus where the S.W.O.R.D. agents who were sucked into the Hex have transformed into performers. Vision encounters Darcy Lewis and wakes her up, pulling her out of the illusion, and she updates him on various events. If the circus setting wasn’t strange enough, various parts of Wanda’s reality start to change and revert to random time periods from previous episodes. Things escalate even further when Monica fights through the field once again to confront Wanda, only this time she is able to retain her consciousness about her true persona and even appears to have gained superhuman abilities. Characters meet up, secrets are revealed, and the fourth wall is broken more times than even Deadpool can count.

Seeing as how we’re in contemporary times, this episode seems to be taking cues from sitcoms such as “Modern Family” and “Parks and Recreation.” The main characters repeatedly talk to the audience about their predicament, just like on those shows. They played around with this trope in the last episode, but instead of just talking to the camera, here we cut away to these people being taken from the scene they’re in and being interviewed, like a mockumentary. While they do play this for comedy for some characters, when it comes to people like Wanda, they do a clever job at having her allude to what’s going on while still being vague enough about what’s being said. It’s like watching an intervention where someone repeatedly says they’re fine, but keeps showing red flags indicating something’s not right.

One of the biggest aspects of the episode that got my attention is how elements of this world glitch back and forth between the past and present, as if the newly-enlarged size of Westview is too much for Wanda to handle. While this is how it seemed, the way it’s presented here clearly shows how the sitcom simulation depends on Wanda’s well-being. With all the crazy events that have happened recently, such as Vision acting out and “Pietro’s” arrival, it makes sense why she would act out here.

Another development that I found interesting was how on the outside of the Hex, it’s stated that whoever enters will have their genetic code rewritten. Seeing as how Monica has entered twice now, watching her go back in for the third time got me really excited for the possibilities. And it did not disappoint. Not only does she maintain consciousness of her true self, but in her brief standoff with Wanda makes it is quite clear that she now has superpowers. While they’re not really shown here, she is able to withstand Wanda’s attack and her eyes glow blue. This reveal was something I wasn’t quite expecting and got me excited for where they’re going to take this character.

There’s also a subplot of Vision and Darcy escaping the circus and trying to get back to Westview. As subplots go, this one is enjoyable. It has a few funny moments with how it plays like a Truman Show type setup, where random people and obstructions get in their way. In one scene, they’re held up at a desolate intersection by a construction crew fixing a traffic light, only to be halted again by an endless line of school children crossing the street. Considering there’s no school in sight, it got a few laughs out of me.

The biggest surprise hands down is when the neighbor Agnes is revealed to be a witch named Agatha Harkness, who seems to be controlling Wanda and, therefore, this world. In some capacity I did see this coming, as in previous episodes too often, when one of the characters came close to figuring it out, Agatha shows up and derails the plot. While it’s still unknown what her plan or motivations are, this reveal shows the audience that we’ve transcended the sitcom-based storyline and have entered the more supernatural territory. It also helps that they show how her actions factor into the previous episodes. They even finish the episode with a musical clip show of her interfering with many of the events of the series. We see how she manipulated the neighbors, created “Pietro” for Wanda (sorry X-Men fans), and even killed their dog Sparky while laughing about it. Talk about diabolical.

I was so invested that when they cut to the “Please Stand By” screen of the end credits, I almost punched the screen. I know it’s a little extreme, but that gives you an idea of how invested I am in this show. I also like to point out there is a mini post-credits scene after the main credits. It’s only a few seconds long, but it’s there if you want to check it out. We’re all caught up to the present day, so let’s see if they can keep the energy high all the way to the finale.