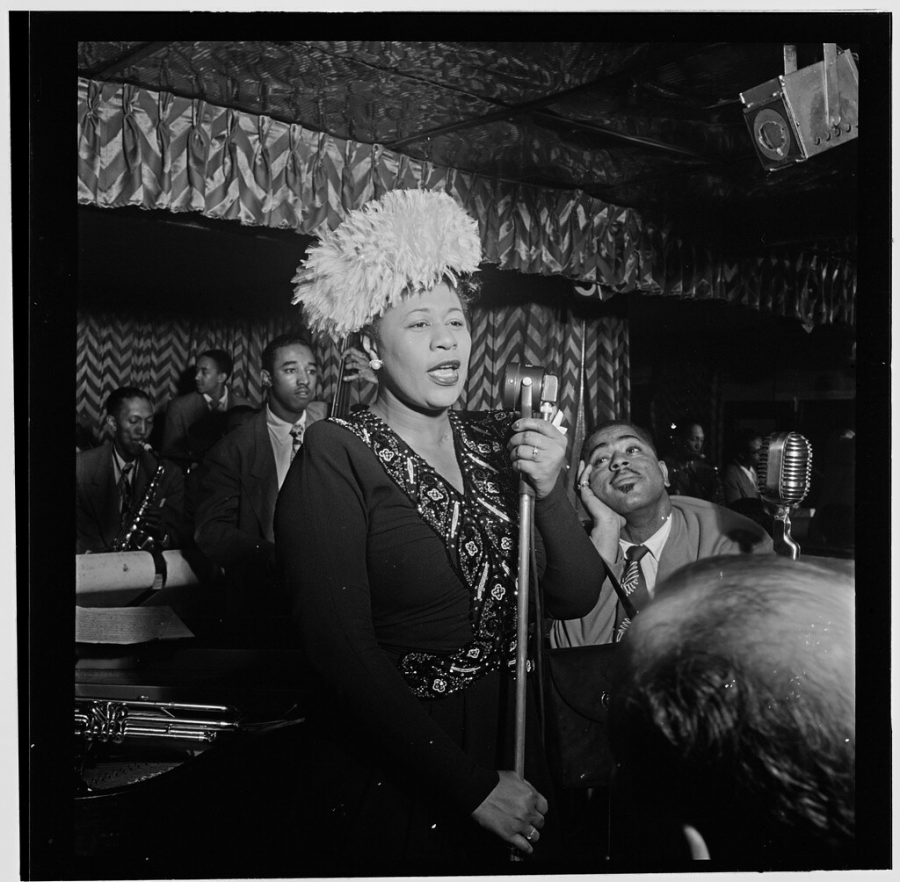 Image courtesy of US Department of State and licensed under CC BY-NC 2.0

Known as “The First Lady of Song,” Ella Fitzgerald was one of the most popular and influential jazz singers in the United States, winning 13 Grammy awards and selling over 40 million albums.

She was born on April 25, 1917 to a single mother in Newport News, Virginia. Shortly after Ella was born, she and her mother moved to Yonkers, New York, where they eventually moved in with her mother’s longtime boyfriend, Joseph De Silva, who she began to refer to as her step-dad.

Growing up, Ella Fitzgerald considered herself more of a tomboy and loved to play baseball with the neighborhood kids. However, she always felt drawn to music.

When Ella was only 15, both her mother and step-father passed away suddenly. For the next few years, she struggled greatly with the loss. Ella would often blow off school and have run-ins with the police. This eventually caused her to be sent to a reform school where she was often beat.

However, during this time, one of Ella’s greatest joys was taking a train to Harlem to the famed Apollo Theatre. It would be this theatre where Ella would be discovered in 1934 during a weekly drawing to compete in Amateur Night.

She chose to sing Hoagy Carmichael’s “Judy,” in honor of her mother and when she had finished, the audience was so amazed by her that they demanded an encore.

From that night, Ella Fitzgerald continued to gain popularity, participating in, and winning every talent competition she could find until she eventually crossed paths with Chick Webb of the Tiny Bradshaw band. He was so impressed with her talent that he hired her to travel with the band. When Webb died in 1939, Ella assumed the position as bandleader and the band was renamed “Ella Fitzgerald and Her Famous Band.”

As Ella began touring and playing in prestigious venues, such as Harlem’s Savoy Ballroom, more people became aware of Ella’s beautiful voice. During this time, she also began to experiment with a new style of jazz singing known as scat singing. Her rendition of “(If You Can’t Sing It) You Have to Swing It,” showcasing this style, was immensely popular with fans and slowly became part of Ella Fitzgerald’s iconic sound.

During the 1940s, Ella Fitzgerald rose to new heights signing with manager and producer Norman Granz. This opened a whole new world of opportunities for Ella, such as joining the “Jazz at the Philharmonic” tour, working with famed musician Louis Armstrong, and producing her songbook series, which featured her covers of popular artists like Cole Porter, Duke Ellington, the Gershwins, Johnny Mercer, Irving Berlin, and Rodgers and Hart.

Because she was a black woman performing in the mid-1900s, Ella Fitzgerald would often encounter discrimination, especially in the Deep South. On one occasion, while performing in Dallas, police barged backstage to hassle the performers. They saw some of the band members shooting dice and arrested everyone.

“They took us down,” said Ella, “and then when we got there, they had the nerve to ask for an autograph.”

Despite everything she had to overcome in her lifetime, Ella Fitzgerald achieved an incredibly successful career touring all over the world and recording over 200 albums. She paved the way for many Black female musicians, who follower her, by refusing to yield to the racial discrimination of her day.

In 1958, Ella Fitzgerald became the first African American woman to win a Grammy. This was the first of thirteen she would eventually win before her death in 1996.

According to her website, “She performed at top venues all over the world and packed them to the hilt. Her audiences were as diverse as her vocal range. They were rich and poor, made up of all races, all religions, and all nationalities. In fact, many of them had just one binding factor in common – they all loved her.”