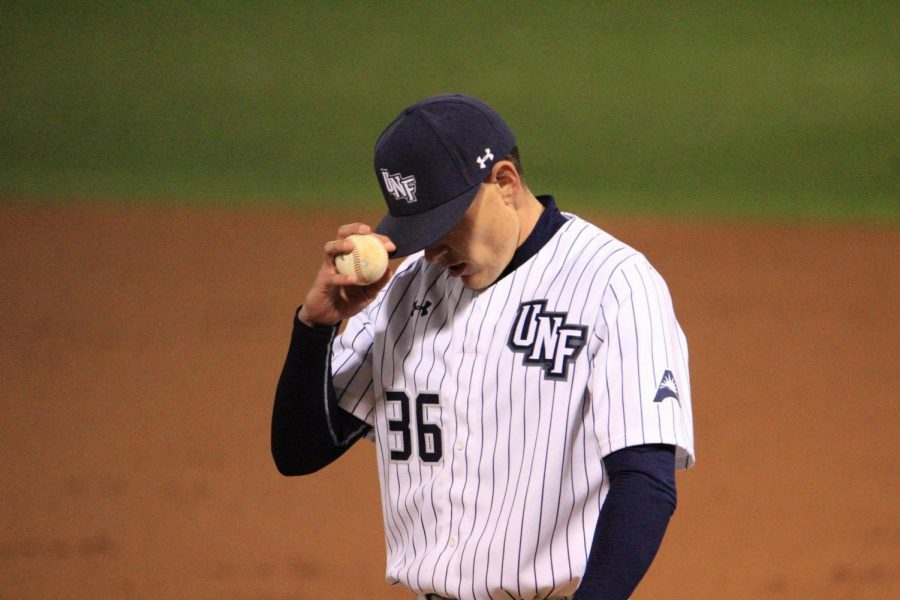 UNF used five pitchers in the game, only giving up three runs on seven hits

With the Florida Gators coming to town, the Ospreys had a shot at one of the best teams in the country. It was a tight game at times, but would UNF be able to pull off the monumental upset?

Coming off of a solid opener at Florida State, the Ospreys hosted another one of the state’s elite baseball programs. With the Gators visiting on Tuesday, baseball returned to campus in grand fashion. Even with COVID-19 restrictions in place, there was still a lively atmosphere at Harmon Stadium.

Florida wasted no time getting their bats going, as they quickly had runners on the corners. A ground ball led to a rundown by the lead runner, who was ultimately caught. The bases would soon be loaded with a walk, with a sacrifice fly bringing in one run for the Gators.

In the bottom of the first, the Ospreys would respond with some offense of their own. A bobble by Florida shortstop Josh Rivera would allow UNF to load the bases. Ironically, another uncharacteristic mistake allowed third baseman Cade Westbrook to drive in a run, tying the game at 1-1 after one inning.

The Gators would be within striking range yet again in the top of the second, putting runners at the corners. However, UNF starting pitcher Ethan Jones was able to bail himself out with a critical strikeout. The Ospreys also wouldn’t be able to capitalize, as they stranded two runners to close out the second inning.

The third inning would spell trouble for UNF, as Jordan Butler got the scoring started for Florida with an RBI single to take a 2-1 lead. UNF starter Ethan Jones would exit the game, with Eddie Miller coming on in relief. This move wouldn’t stop the bleeding, though, as UF’s second baseman Colby Halter ripped a bases-clearing triple to go up 5-1. The Ospreys wouldn’t be able to answer, going three up-three down in the bottom of the third.

Following Florida’s offensive explosion in the third, things quieted down for both squads. The next action would come in the bottom of the fifth, when UNF shortstop Abraham Sequera hit a home run to give the struggling Osprey offense a spark. This energy spread throughout the dugout as a Tanner Clark sacrifice fly brought in another run for UNF. They would strand another runner in scoring position, which would haunt this team as the night went on.

Things became quiet once again, until the seventh inning, that is. With runners on first and second with no outs for the Gators, the Ospreys called the bullpen. The damage was done, though, as relieved Stephen Halstead walked the second batter he faced. With the bases loaded, the Gators went to work. A double from UF outfielder Jacob Young increased their lead to 8-3.

Facing down the barrel of a loaded five-run deficit, the Ospreys needed something. This jolt wouldn’t happen until the bottom of the ninth inning, though. Now down 9-3, revival swept through the UNF batting order. An RBI triple by second baseman Aiden Sweatt brought the score to 9-4. Abraham Sequera’s second home run of the night narrowed the deficit to just three runs.

Only down three runs, hope began to fill the stands of Harmon Stadium. This hope would, unfortunately, fade, as Florida would hang on to win 9-6. While a loss is never the desired result, the Ospreys showed promise and will have a chance to avenge their loss tomorrow in Gainesville as they face off yet again. The game starts at 6 p.m. and can be streamed via SEC Network+. Follow along with Spinnaker for the latest on UNF baseball.