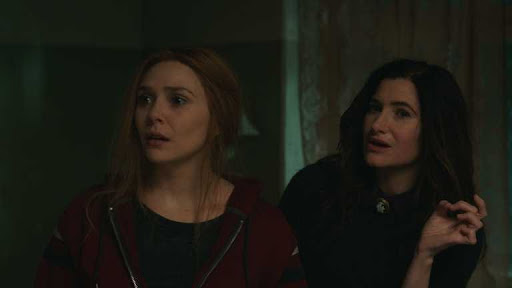 We’re truly in the supernatural territory now folks! There’s only one episode left in this season, and we’re finally getting the answers we’ve been waiting for.

The episode begins right where we left off last week, with the witch Agatha Harkness demanding to know how Wanda was able to use her magic to change and control reality, threatening the lives of her children to do so. Things become complicated as even Wanda herself is unsure how her magic works. Agatha then forces Wanda to relive key moments in her life, and how each memory factors into the show itself. The episode takes the form of a character study as we explore the mind and memories of one of Marvel’s most powerful heroes.

When this series was first announced, this was the type of episode I was waiting to see. While I greatly enjoyed these homages to sitcoms mixed with reality-changing elements, I was waiting for an episode where we got to know Wanda on a more personal level. While it is a flashback episode, it’s so satisfying because we get to see Wanda’s past and how elements factor into this show. For example, the sitcoms aspect of this series stems from how Wanda as a child used to watch classic American sitcoms with her family. It was probably one of the few times in her life when she was happy, so it makes sense why this series is told the way it is. We get to see events of her life unfold, such as the death of her parents, being experimented on by Hydra with the mind stone, and her early days with Vision. We’ve always known this character has been through so many traumatic events, so to see them firsthand was very effective.

Performance-wise, Elizabeth Olsen once again knocks it out of the park. While we’ve seen bits and pieces of her in the movies, to see them fully delve into her character and background was really something to witness. Even though she’s done some controversial things like taking over a whole town, you still understand the choices she makes and where she’s coming from. A lot of that does come from the writing in this show, but I feel it works so well because Olsen’s performance is so strong and so relatable that you feel for her. I especially enjoyed Kathryn Hahn as Agatha Harkness. Her reveal from the last episode was such a great payoff and it’s nice to see her in full villain mode here. Showing her origins in the Salem witch trials and then her educating Wanda on the effects on magic was very entertaining. I was also greatly impressed with how magic was used here. We got glimpses of that in “Doctor Strange,” but here they show that they can do all kinds of crazy things with it and it is awesome. She’s actually proving to be one of this universe’s better villains, right up there with Thanos and Killmonger.

This episode even surprises viewers’ expectations with how certain events in the series truly played out. For example, it is revealed that when Wanda went to see Vision’s body at S.W.O.R.D. headquarters it was to lay him to rest, not revive him. I’m not going to lie, seeing Vision’s body being torn apart and spread across the room was unsettling.

This eventually leads Wanda to travel to Westview to a plot of land that Vision had bought for her intending to live together there. Seeing Westview in its real form for the first time was pretty bizarre, as it’s portrayed as a town in the dumps with a population that seems devoid of life (insert 2020 joke here).

In a fit of grief, Wanda unknowingly uses her powers to transform the town into the sitcom world we know today. It is even revealed that she created her own version of Vision, which means that the one we’ve been following for the past several weeks isn’t the real Vision. The groundwork for the climax is eventually set when Agatha holds Wanda’s children hostage while revealing that Wanda possesses a legendary form of magic and calls her the “Scarlet Witch,” finally establishing her comic title and setting up the season finale.

Just when you think it’s over, there’s a mid-credits scene where it’s revealed that Hayward and S.W.O.R.D. succeeded in rebuilding Vision’s body. Only this time, he’s completely white creating “White Vision.” Once again, this series brings pages of Marvel comics to life as we enter a new era with Phase Four.

To sum up my thoughts, this episode had me glued to the screen from beginning to end. It had a great story, chilling reveals, and characters that we can’t get enough of.

Write out your theories and catch up on this show’s easter eggs because the hype train is at full speed as we make our way to the season finale.