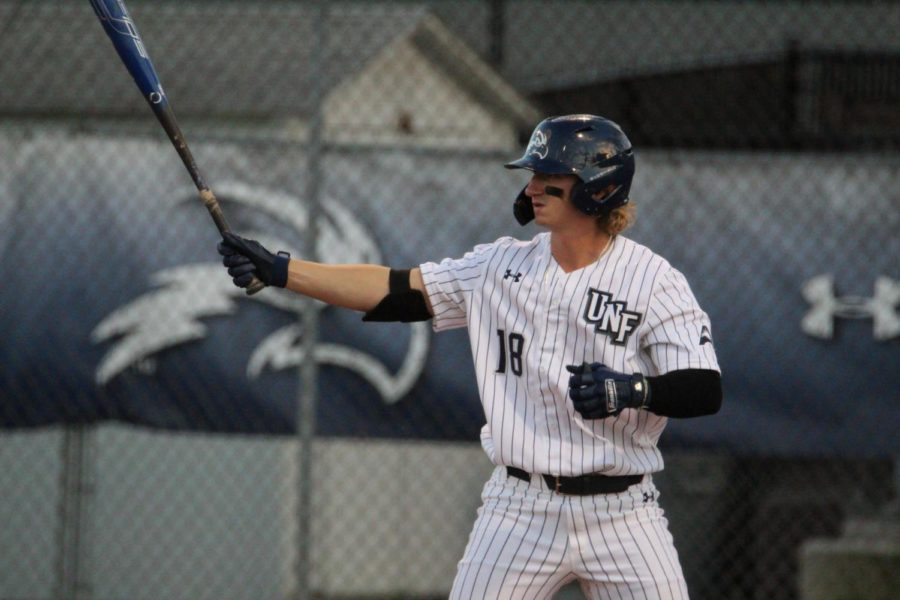 To say UNF’s matchup with UCF was rough would be quite an understatement. As the game progressed, the Knights continued to pour it on as the Ospreys struggled to get anything going offensively, winning 10-0.

It was another chilly night at Harmon Stadium as the Ospreys returned from a successful road trip to Athens, where they took a game from the nationally-ranked Georgia Bulldogs. Wednesday’s opponent was the UCF Knights, as the two squads squared off for the first of a four-game series.

Starting for the Ospreys was Rafael Santos, while Kenny Serwa took the mound for the Knights. It was a quiet first inning, as both teams went three up-three down. This wouldn’t last long, though, as a Pablo Ruiz home run put the Knights up 2-0. In the bottom of the second, UNF’s Austin Bogart doubled, but nothing would come of it as he was stranded on base.

The Knights picked up where they left off, as second baseman Matt Archer led off the third inning with a triple. An RBI single by Gephry Penã brought him in, increasing UCF’s lead to 3-0. This would lead to UNF’s first pitching change of the night as Dylan Kelley entered the game. UCF’s Jordan Rathbone was caught stealing second base, ending the inning.

Things would then cool down in terms of scoring, as neither team could put another run on the board until the sixth inning. Unfortunately for UNF, this would dig an even deeper deficit. UCF catcher Josh Crouch drilled a home run to left field to expand the lead to 5-0. Ben McCabe’s double brought about another pitching change, as Zach Chappell took the mound for the Ospreys. He would walk in a run, but further damage was avoided.

Now down 6-0, UNF was in desperate need of some life offensively. It appeared help was on the way, as an infield hit by Blake Marabell gave the Ospreys two base runners with just one out. Things would not pan out, though, as a strikeout and ground out would end the inning.

The top of the eighth inning would be the Knights’ final barrage, as they brought the entire castle. UCF loaded the bases early, with UNF bringing in reliever Justin Parrish in response. A double by shortstop Alex Freeland brought in two runs. This would be followed up by a sacrifice fly and an RBI single, boosting UCF’s lead to 10-0.

The Ospreys were never able to get a run on the board, as they dropped the opening match with UCF 10-0. With only three hits, the Ospreys couldn’t counter the explosive offense of the Knights. That’s the great thing about baseball, though: the Ospreys will have a chance to avenge this loss on Thursday as they travel to Orlando.

Thursday’s game will be hosted at UCF, with Saturday’s game back at UNF. The two teams will finish their series back in Orlando on Sunday. Make sure to follow along with Spinnaker for the latest on UNF baseball.