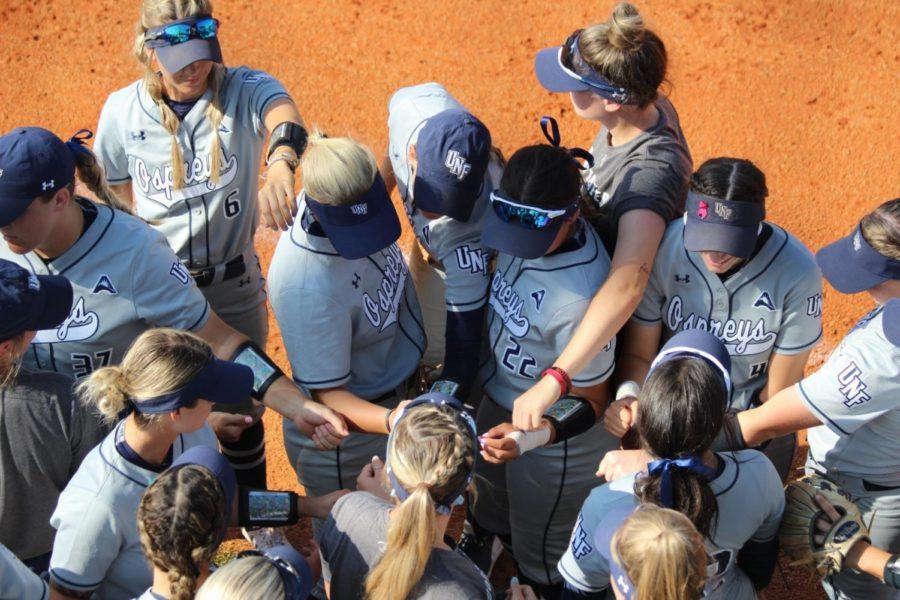 It was a tale of two games on Wednesday as the Ospreys hosted the Knights of UCF, who entered the game ranked 20th in the country. The first half of the doubleheader would see UNF pull off the upset win, but how would they fare in the rubber match?

The Ospreys had a shot at the red-hot Knights, who entered Wednesday’s doubleheader on a five-game win streak, one of those being over 2nd-ranked Arizona. Having lost their previous meeting on March 3, it would be a tall task for UNF, but it was a challenge they were willing to face.

Starting the first game for the Ospreys was junior right-handed Izzy Kelly, while Alea White took the mound for the Knights. Kelly was able to go through the order with ease in the first, but UNF wasn’t able to follow this up with any offense of their own.

The second inning was a productive one for the Ospreys, as they struck with power to take an early lead. An RBI double by Ashley Goebel brought in Logan Jackson to give UNF a 1-0 lead. This was followed up by a Paige Pfent home run, extending the lead to 4-0.

The third inning would see UCF chip away at the lead thanks to an RBI by Kennedy Searcy. However, this would only cut the deficit to three before the Ospreys got out of the jam. UNF wasn’t able to capitalize on a bases-loaded opportunity, ending the inning.

The Knights would continue clawing away at the lead in the fourth, as Karissa Ornelas sent one deep to narrow UNF’s lead to 4-3. The Ospreys had a response ready, though, as Paige Pfent hit her second homer of the game to open the lead back up to 6-3.

The fifth and sixth innings would be a turning point in the matchup, as the Knights put up a combined four runs, capped off by a 2-RBI single by Georgia Blair. Going into the last inning, the Ospreys trailed 7-6 and needed a run to extend the game. However, they had something even better up their sleeve.

With runners on first and second, UNF had the perfect opportunity to strike. Rebecca Koskey approached the plate with one out and the game on her bat. Koskey caught a 2-2 pitch just right, sending it over the fence, giving the Ospreys a walk-off 9-7 win over the Knights.

While the action had reached a boiling point at the UNF Softball Complex, there was yet another game to be played. Unfortunately for the Ospreys, this one wouldn’t go as well.

Alyssa Dyhr, a southpaw sophomore, got the start in the second game. Things started well for UNF, as a Kayla McGory home run put the Ospreys up 1-0. UCF would answer in the top of the second, tying things at one run apiece. Through the next two innings, the Knights would take a 4-1 lead.

UCF blew things open in the top of the fifth with a four-run inning, capped off by a Kennedy Searcy home run. Now down 8-1, the Ospreys were in danger of having the game called early. With bases loaded in the top of the sixth, this seemed inevitable. A walk brought in a run for the Knights, giving them a 9-1 lead.

The Ospreys couldn’t fire back, causing the game to go final after six innings. UCF showed incredible resilience by bouncing back, but this is no reason for the Ospreys to hang their hats. A thrilling win over one of the country’s best teams should be a source of momentum for UNF as they hit the road for a weekend series against conference foe FGCU. Follow along with Spinnaker for the latest on UNF softball.