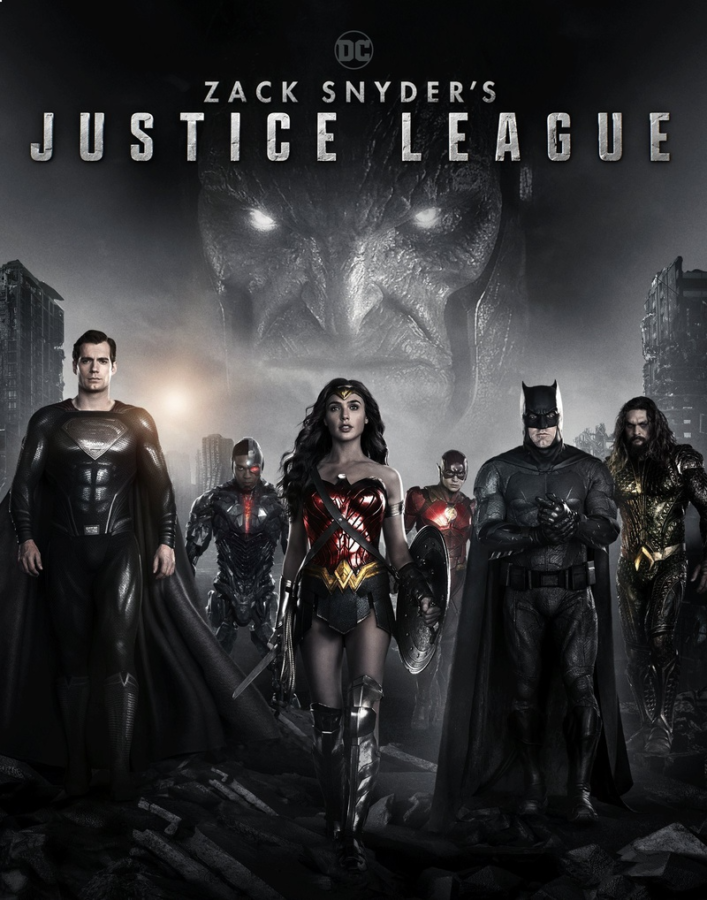 After over three long years of online campaigns, the #ReleasetheSnyderCut movement has finally succeeded with the announcement and release of “Zack Snyder’s Justice League.” As you can imagine, a lot is riding on this film. DC fans and film buffs want to see what the director’s vision has to offer. People have been asking, does it live up to the hype? Well, let’s take a look.

Following the death of Superman in “Batman v. Superman: Dawn of Justice,” Batman and Wonder Woman take it upon themselves to gather up the world’s metahumans and form a league of heroes to stop future threats. This includes heroes such as The Flash, Aquaman, and Cyborg. The task is easier said than done as each character is going through dilemmas that they can’t seem to overcome. The Flash wants to prove his father innocent of a crime he didn’t commit, Aquaman feels like he doesn’t belong on either land or sea, and Cyborg to keep his humanity after the loss of his mother and body in an accident. Their time is limited as a general from the planet Apokolips, Steppenwolf has come to retrieve artifacts called mother boxes to take over the earth for Darkseid, who plans to subjugate all life to his will. The heroes now have to band together and stop these new enemies and protect their world.

A lot of expectations have been riding on this film like whether or not it would satisfy fans or even casual moviegoers in general. However, I am happy to report that I genuinely love this movie. Even with its long runtime and large amount of story elements, I felt it managed to cover them all and give us an epic, fun, and all-around satisfying film. Like most people (in that I mean all people), this version is light years ahead of the theatrical cut from 2017. The story is more engaging, the characters are more fleshed out, and the film finds that perfect balance of being dark while still feeling a lot lighter than the previous films.

It’s interesting how in most directors’ cuts, they usually come with around five  to six  scenes of new footage. However, this film has about 75-80% of the film’s footage that we’ve never seen before. It’s common knowledge that so much has been left on the cutting room floor for the theatrical cut, so seeing it here really gives you an idea of how much was left out. While there are scenes that fans have seen before and remember, it’s a new experience when you see how it plays out in the context of this film. For one, the action is a hundred times better. While many of them are what we’ve seen already, they add a lot more purpose and stakes to where these scenes actually have a lot more weight to them. I also find it interesting how all the scenes that people enjoyed in the theatrical cut were all done by Snyder. It’s really eye-opening, as this feels less like a director’s cut and more like an entirely different movie.

My favorite aspect of this movie was the characterization of the characters. I was really impressed with how much depth was given to them. This film takes advantage of its four-hour runtime and allows us to get to know these characters. While characters like Batman, Wonder Woman, and Aquaman are fairly the same, characters like Flash, Superman, and particularly Cyborg are given so much characterization that their storylines are easily the best highlights of the film. If you were to ask me who my favorite character was, I would definitely go with Cyborg because his arc is one the biggest standouts of this film. You see how he struggles with the changes in his life. You understand his background, particularly with his family a lot better. As far as characters go, he’s the MVP here. I agree with Snyder when I say he truly is “the heart of the movie.” Even characters like the villain Steppenwolf were given a lot more characterization here. Yeah! You remember the forgettable CG villain from the previous version. Well, now they give him an actual character and arc. It’s not groundbreaking, but you feel like you’re watching an actual character and not just an overused trope.

I was also extremely satisfied seeing how certain characters’ storylines originally played out. When Superman returned from the dead in the black suit to help the League, I jumped out of my seat in excitement. Darkseid and his first live-action appearance made my jaw drop at how well they nailed this character. Even the future Knightmare scenes, involving Batman and Joker, are surprisingly well handled and make me excited to see where they’re going to take these storylines. There are a few people who I would like to have seen play a bigger part, like Lois Lane and even a surprise hero, who I won’t give away. However, I understand the choices made as the focus is where it should be, the Justice League members themselves.

Another aspect that surprised me was how much lighter this film was compared to Snyder’s previous works. While there is a lot of violence throughout, the tone was lighter with how it portrays its characters and story. It doesn’t do a complete 180 degree turn into lighthearted fluff as the theatrical cut did. They actually find that balance of both dread and optimism, and it really works. There’s even some humor to be found here, most of which comes from The Flash. While there are some jokes throughout, it never feels like overkill, and it knows where and how to say them without going out of character. Unlike the theatrical cut which was very quippy and dialogue-heavy, this one is told more from a visual storyteller’s point of view. This is something  Snyder always does well because even though there are times where characters don’t talk much, you understand what they’re feeling through their expressions. You know what they’re about from their setups. You see their development through the music whenever it speeds up or slows down.

I can see a lot of people having difficulty getting through the runtime, which to be fair is really long. They even set the film up in different parts, almost like a miniseries. But in all fairness, it didn’t feel that long to me. I was so invested that it felt more like three hours than four, but that’s just me. It’s also fair to acknowledge that this movie had a lot of elements to establish, which is understandable when you consider the number of characters in this film. In my opinion, they did the characterization aspect so well that time passed by. I know it may not work for everyone, but I much rather watch a long movie with lots of characters than a short one with no character at all.

I would also like to point out that this film does end on numerous cliffhangers, namely three. Without giving anything away, they were meant to establish future films that were in development when the film was being made. Now that we’re in the present day, it’s unknown whether or not we’ll see these events play out. Personally, I hope they continue with them in some shape or form because I feel like this movie has realized these characters and it would be interesting to see what they do with them next.

I know while I’m writing this I’m still in the moment, but I can’t help it. To see this film after so many years is nothing short of a miracle. In fact, the most interesting thing about this movie is the history behind it. The fact that so many fans banded together and campaigned to get this film released against a studio that claimed it didn’t exist is truly amazing. In my opinion, this film shows in full view the power of fandom.

Watching this film for myself really made me appreciate the efforts that people took in getting it released. Not just from the fans’ standpoint, but the filmmakers in general. They didn’t cave in with what the studio wanted, they stood firm and gave people what they wanted to show them. A lot of that has come from Zack Snyder himself. People may not agree on his movies, but when you see him interact with fans and how actors love working with him, he’s actually a pretty cool guy. I can’t imagine how hard these  past few years must have been after suffering a family tragedy with the loss of his daughter. He chose to be with his family during such a hard time and let go of his vision while a studio completely butchered it. I don’t know about you guys, but a man who chooses family over their work is a good human being. Overall, I’m happy he got his film made, as it proves that a director’s vision can see the light of day and surpass people’s expectations. In the grand scheme of things, I see it as an important movie for that.

To sum up my thoughts, I think “Zack Snyder’s Justice League” is a film that lives up to fans’ expectations while also giving moviegoers something they’ll never forget.