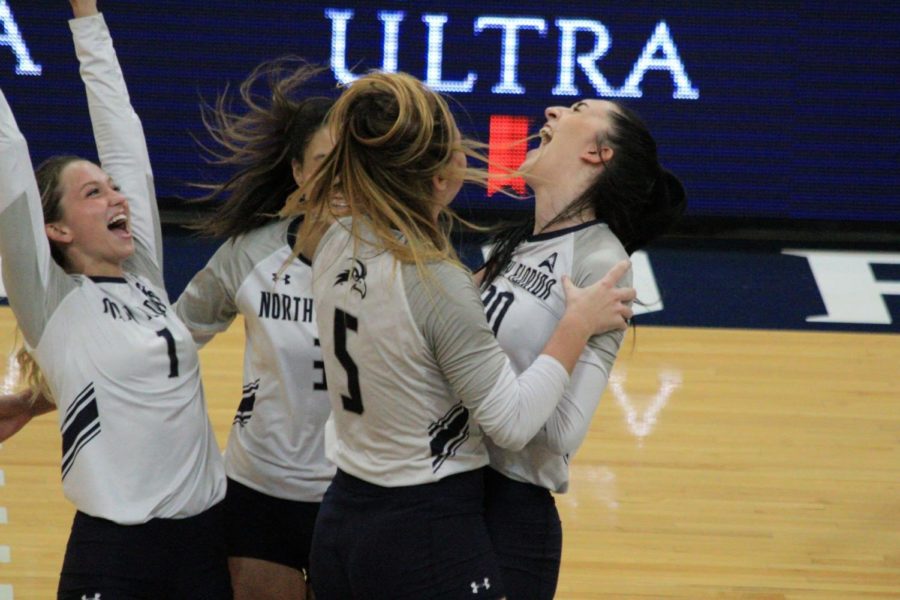 Get the brooms out, folks; we have a sweep on our hands. UNF women’s volleyball was on a mission to win in the ASUN quarterfinals, and nothing would stand in their way. Not even a Stetson team that has some experience against the Ospreys.

The ASUN tournament quarterfinals had arrived in Jacksonville, and the UNF Ospreys held host to the Stetson Hatters. The energy was alive in the UNF Arena, even with a crowd size of just over 200 people. This matchup between the two teams was their fifth of the season, and the intensity level was high.

In her postgame ZOOM conference, Head Coach Kristen Wright said that even before the first serve was hit, her team was in the zone.

“They were really excited,” Wright said.  “I actually made a comment to the staff; I was like, wow, they’re fired up at the beginning of serve and pass.”

As the 7 p.m. start time arrived, the team was ready to play. Throughout the first set, the Ospreys commanded the game early and gained a 6-1 lead to open the match. Stetson wouldn’t be able to claw back, and UNF won the set with ease by a score of 25-14.

The second set would be much like the first, with the Ospreys being able to pull away from the Hatters around the midway point. The Ospreys decision-making and determination would stifle Stetson, and UNF would take this set by a score of 25-16. This set win meant the Ospreys going up 2-0 in the game with all the control in the world.

The third set is where things got interesting.

Stetson came out of the gate swinging in the third set, gaining an early lead and holding it for most of the set. The Ospreys found themselves in a pickle for the first time this match but kept things as close as the pressure heated up.

Keeping it to a one or two-point Stetson lead, the end of the set would come with drama, excitement and a little bit of disappointment. Having four set points (24-22, 24-23, 25-24, 26-25), the Hatters would fail to capitalize on each of them, and the Ospreys were heating up as things came down to the wire.

On their first match point at 27-26, the Ospreys got the job done and swept the Stetson Hatters to reach the ASUN semifinals for the first time since 2012.

In her third season with the Ospreys, Coach Wright had finally won an ASUN tournament game. The team had stuck to their beliefs and completed the sweep in a critical situation.

“Once we tied it up, I don’t think they ever doubted they could win,” Wright said. “It’s just a point-by-point mentality and each rotation and matchup. So I think [their] belief is key.”

In a usual regular-season conference schedule, the Ospreys would have played each ASUN volleyball team two times a year. With this season being split into two divisions, this semifinal matchup will be the first of the season between the two teams.

Even with it being their first meeting of the year, Coach Wright knows that if the team has a solid game plan and executes correctly, the team has “a really good shot of getting to that next step of going to the championship.”

The ASUN semifinals will take place on Saturday, April 2, with the UNF Ospreys playing the Lipscomb Bisons at 4 p.m. and the FGCU Eagles playing the Kennesaw State Owls afterward at 7. The semifinals and championships will be hosted at Kennesaw State University, and all matches will be on ESPN+. Follow along with UNF Spinnaker for more updates.