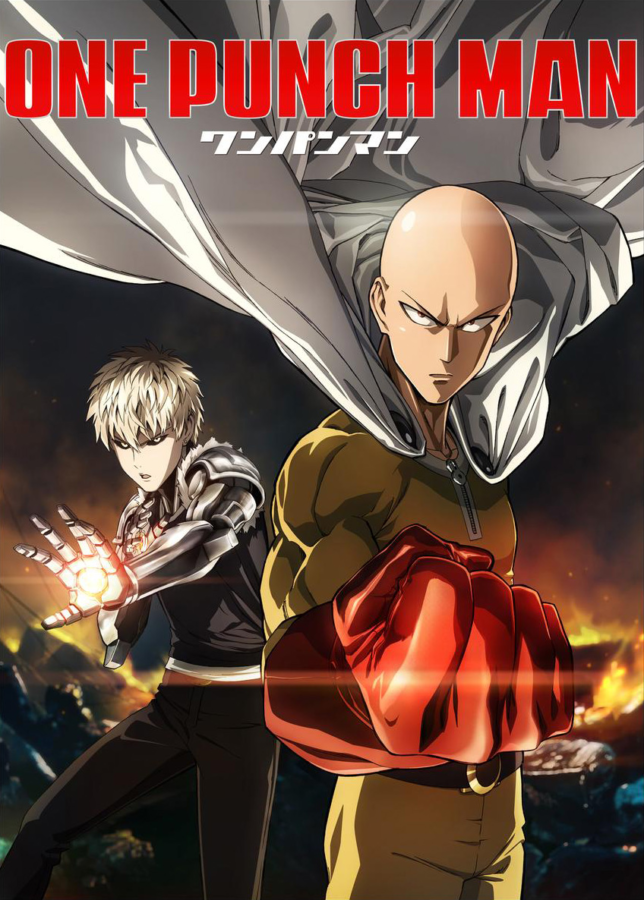 Since I’ve talked about Marvel, DC, and other superheroes in the media, it only makes sense that I give my thoughts on “One Punch Man.”

The series takes place on the supercontinent, Earth, where all sorts of villains and giant monsters wreak havoc on the public, which is why the government established the Hero Association to fight evil. Our protagonist, Saitama, is an unassociated hero who has trained himself so hard that he is able to beat virtually any opponent with, you guessed it, one punch.

He fights crime for his own enjoyment, but he is left with a sense of boredom as his abilities are so powerful that there are hardly any challenges in his life. He’s eventually found by a cyborg named Genos, who wishes to be Saitama’s disciple so that he can get stronger and defeat the cyborg that destroyed his family and hometown. Saitama and Genos then decide to officially join the hero world to be recognized, but that’s easier said than done as their acts still remain unnoticed and unappreciated by the public.

One of the things that stands out the most to me in this series is the premise, which I’ll say is really clever. We’re familiar with indestructible characters like Superman, where they’re basically able to beat any threat easily. Well here, this anime explores the downsides to that as the main lead is down in the dumps because he has so much power and is constantly being underwhelmed by the enemies he faces. I also find it interesting how he’s mainly doing this just because he feels like it. While he still does save people and do the right thing, his main goal is to be loved and recognized. That’s something you don’t always see very often, at least not in this type of character. They do take advantage of this aspect and make it really funny to watch.

Even the world these people inhabit feels like a traditional comic book world. You have the villains spouting long dialogue, the best friend with a dark past, and the city that’s always being destroyed and rebuilt within a week. It’s all stuff we’re familiar with. Bizarrely enough, this anime is aware of this and pokes fun at it numerous times. There are scenes where the villains are monologuing and our hero is busy trying to remember his name. Or when a city gets destroyed and his biggest concern is that his favorite supermarket is gone. Even a lot of the heroes in this world are portrayed as how you’d expect people with powers would act. It reminded me a lot of “The Boys,” in that the heroes are mostly fighting crime to further their status or publicity. A whole city could be in danger and all they’re thinking about is leveling up their stats.

With all that going for it, I will admit it didn’t catch my interest like a lot of other shonen anime did. It got me thinking why other shonen characters like Deku and Tanjiro Kamado stood out to me more than Saitama. Taking away the fact that he’s overpowered, I think it comes down to two things: the character’s motivation and the journey. The best characters in shonen anime stand out to us because they had a motivation and journey that drives them, as well as the story forward. Deku from “My Hero Academia” wants to master his power and be like his idol. Tanjiro Kamado from “Demon Slayer” wants to save his sister and avenge his family. Yuji Itadori from “Jujutsu Kaisen” wants to protect his friends and die a proper death. As far as Saitama goes, he just wants to do hero work for fun and get popular. While it’s not bad, it’s not very relatable. Even the way he got his powers isn’t really explained. I understand it is part of the joke, but we don’t get to see the journey aspect as he’s already at the peak of his powers. You can show him annihilating opponents left and right, but when you compare his story to other characters, it doesn’t feel as interesting.

Another thing that took me a while to get used to was the world building, which in my opinion isn’t very detailed. While you get the main idea of how this world works, it doesn’t go much further beyond that. You don’t really know the people on the ground so you don’t really care when a building falls down. The villains, while creative, are played out as generic baddies to fight. While you do spend time with some of the heroes, it’s not really enough to create a connection. The only other character I grew to like watching was this hero riding a bicycle named Mumen Rider. This idea sounds crazy as it’s basically a guy with no powers who goes around riding a bicycle to save people. At first, they play it off as a joke. But the more he appears, the more you warm up to him as he is doing the right thing for the sake of it. The odds are always massively against him, and he doesn’t back down. He even shares a nice moment with Saitama once in a while. I wish this show had more characters like this.

The animation here is greatly handled as it really has a lot of fun with these creative designs and unique scenarios. It’s one of the few shows where even when it gets fast and blurry, I could still see everything. Every scene and frame is packed with so much movement that my phone had to take a break and pause every once in a while. It also helps that this series doesn’t hold back on the powers aspect because wow! You thought superhero films like  “Man of Steel” had too much destruction, you ain’t seen nothing yet. I could go off both hands a number of times some giant monster or villain destroys the city because the destruction here is crazy. While there’s not much weight to it, as you don’t know a lot of the characters, it’s still wonderful to look at.

That about sums up my thoughts on “One Punch Man.” Is its story as good as something like “My Hero Academia”? No. Is it the most unique superhero show out there? Probably not. But a lot of its fun resides in its creative premise, humor, and destructive animation. If you have any free time, this anime is a fine show to check out.