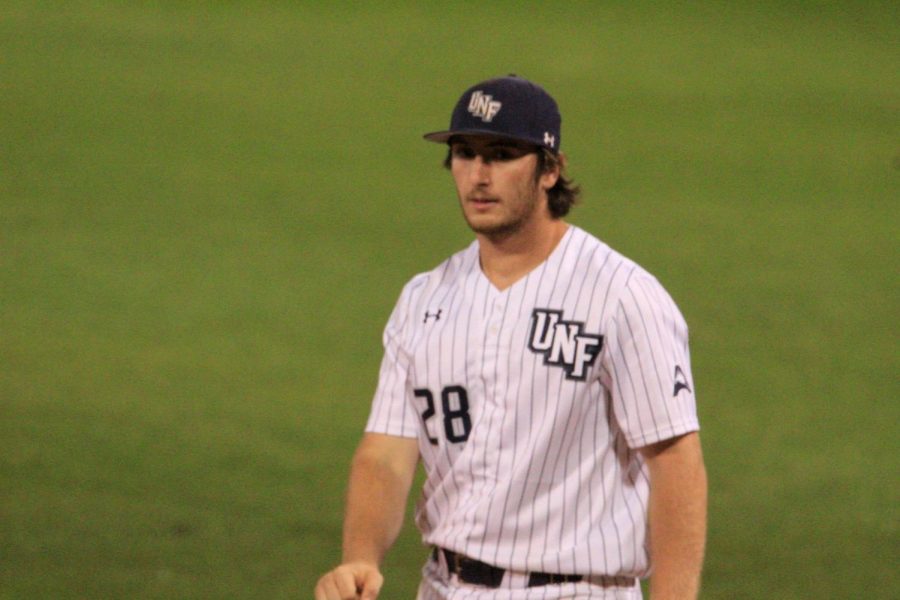 Thanks to two home runs by graduate transfer Alex Kachler, the Ospreys were able to defeat the Bulldogs in Athens on Friday night

Following a road sweep of the Jacksonville Dolphins in March, the UNF Ospreys had a chance to pull off the season sweep this weekend as they hosted their rivals. Despite being a competitive series at times, the Ospreys proved to be too much for the Dolphins as they swept JU for the second time in 2021.

The series got off to a solid start for the Ospreys, with Tony Roca pitching an absolute gem on Friday night. Throwing 107 pitches over the course of eight-plus innings, the sophomore anchored the winning effort while only giving up one earned run.

In addition to the stellar performance on the mound, shortstop Abraham Sequera came just one double short of hitting for the cycle. These were not the only impressive feats, though, as an incredible home run robbery by center fielder Blake Marabell caught the eyes of many. The snag even made its way to the number one slot on ESPN’s SportsCenter Top 10!

All in all, UNF took the opener by a score of 8-5, but there was more work to be done. Saturday’s match saw the Dolphins take an early lead, but the Ospreys would rally and post six runs of their own in the fifth inning. Adding fuel to the fire, three more runs in the sixth inning secured the lead. A weather delay would bring things to a grinding halt, but UNF ultimately held on to win 10-4.

Going into Sunday’s rubber match, UNF had secured the series win, but a win would complete the season sweep. It didn’t take the Ospreys long to get on the board, as a Blake Marabell two-run double grabbed an early lead for UNF. However, JU would respond in the second with a run of their own to narrow the gap. A bases-loaded opportunity for the home Ospreys would be squandered in the third, keeping the lead at just one run.

The Dolphins would also go on to load the bases, but could not capitalize after a double play shut down the inning. The top of the fifth inning appeared to be a turning point for JU, however, with back-to-back home runs by Kyle Richardson and Ruben Someillan giving JU a 3-2 lead. A sacrifice fly by Christian Coipel would expand their lead to two runs, but a storm was brewing in the opposing dugout.

Put simply, the bottom of the fifth was a disaster for the Dolphins. While a three-run top of the fifth gave JU the lead, this would be countered by a nine-run effort by the Ospreys in the bottom half of the frame! Leading the charge was an Isaiah Byars grand slam, along with an Alex Kachler home run to the opposite field. Now leading 11-4, UNF had the series in the palm of their talons.

The Dolphins would go on to score a few more runs, but it wouldn’t be enough as the Ospreys took the series finale 14-6. With this win, UNF has taken all six meetings with JU this season. While it has been a down year for the Dolphins, sweeping your rival in the regular season is still an incredible accomplishment.

With the regular season schedule winding down, each win is crucial for the Ospreys as they look to improve their seeding for the ASUN tournament. Sunday’s win propels UNF to fourth in the conference standings.

With 11 games remaining, the Ospreys will next be in action on Wednesday afternoon when they host the FAMU Rattlers. While this game won’t affect their ASUN positioning, it’s important that UNF keeps the momentum rolling as their next conference matchup will be a three-game road trip to face FGCU, who swept the Ospreys earlier this season. Wednesday’s battle with FAMU will start at 3:05 p.m. on campus at Harmon Stadium. Admission is free for the first 250 fans and the game can be streamed on SWOOPLifeLive. Follow along with Spinnaker for the latest on UNF baseball.