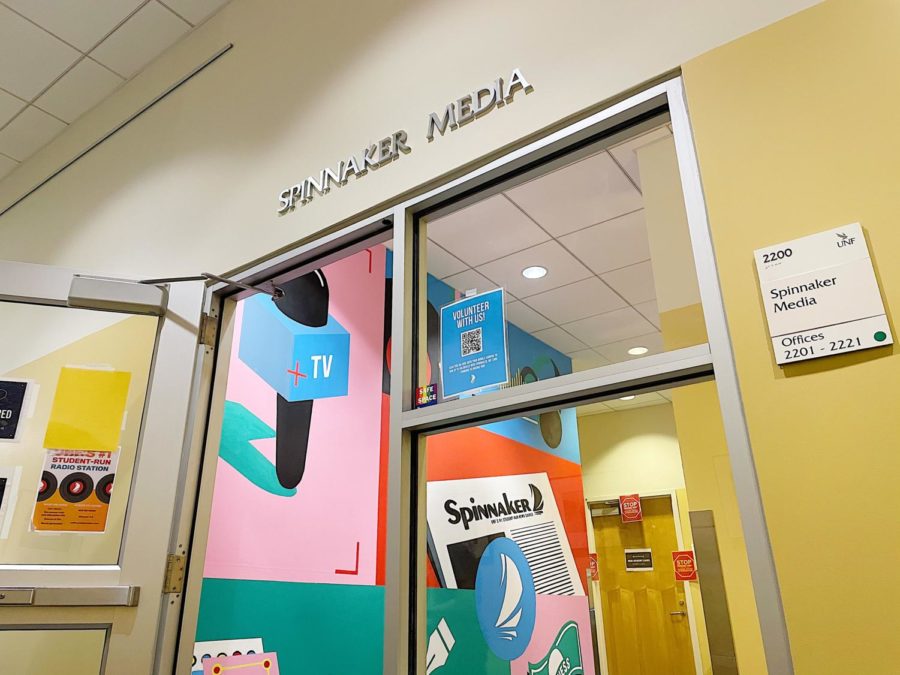 Vibrant bursts of color and a captivating work of art now greet those who enter Spinnaker Media’s office thanks to recent UNF graduate and Spinnaker’s design editor, Jill Responte.

Responte has worked as Spinnaker’s design editor for the past two years. This year, Responte graduated with a Bachelor of Fine Arts with a concentration in graphic design and digital media and minored in marketing.

Now that Responte has graduated, someone else will soon hold the title of Spinnaker’s design editor, but Responte has both literally and figuratively left her mark on Spinnaker Media.

What was once a blank wall in Spinnaker’s office, is now an eye-catching mural that captures the different areas of Spinnaker Media: TV, radio, news, creative, and business. The idea for the mural came from Spinnaker’s Director, Mo Baker. Jill Responte took Baker’s idea for painting a mural on one of the blank walls in the office and ran with it.

The design of the mural itself was developed by Responte. As for the mural’s color scheme, Responte said she wanted something bold, trendy, and colors that were really going to pop. Other members of Spinnaker’s creative team helped Responte when it came to choosing between mood boards and the overall style of the mural.

Responte said she designed the mural to show off the different departments at Spinnaker. She also explained that she kept the design simple because she’s not a painter.

“I’ve never painted a mural before so I wanted to make sure it was accessible for me,” Responte said.

In order to get the images and text in the mural so precise and detailed, Responte used a projector to display the design onto the wall then she traced the design on the wall in pencil. After that came the painting process. A few of Responte’s friends, Emmalee Peterson, Ruben Baeza, and Molly Jourdin, helped Responte paint the mural.

“Emmalee is way more detailed oriented than I am, so she did the Spinnaker logo and the really fine parts,” Responte explained.

Responte estimated that she began painting the mural around the beginning of March of this year. She came to Spinnaker’s office about once a week, typically on Thursday or Friday evenings after her school week was over, to work on the mural and painted for approximately five to six hours at a time. Altogether, the painting process took about 48-60 hours.

Responte admitted that she was nervous about the mural in the beginning, but that she’s prouder of it than she expected to be. Any nerves Responte experienced certainly aren’t shown in the mural – the mural itself is simply remarkable and Responte’s talents greatly shine through it.

Responte said she enjoyed the experience and said she couldn’t have done it without the help and support of Mo Baker (Spinnaker’s director), Amanda Cox (Spinnaker’s office manager), and her friends that assisted her in the painting process.

There’s no doubt that Responte’s mural brings Spinnaker’s office to life and gives off a warm, lively feel to anyone that walks through Spinnaker Media’s office door.