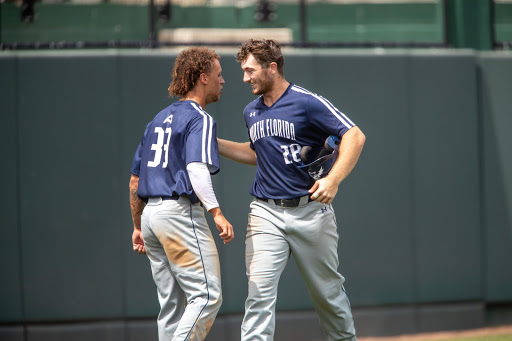 Riding a wave of momentum following their second sweep of JU, the UNF Ospreys returned to the diamond on Wednesday. Facing the FAMU Rattlers in a one-off game, the Ospreys powered past their opponent with a strong offense.

Taking the mound for UNF was Eddie Miller, the redshirt-senior from Ocala. The Rattlers were able to take an early 1-0 advantage, but this wouldn’t go unanswered. The second inning would see the Ospreys tie the game at one run apiece. This was thanks to an Isaiah Byars RBI single. This was followed up by a two-run single off the bat of Alex Kachler, giving UNF a 3-1 lead.

In addition to snagging the lead, this was Kachler’s seventh consecutive at-bat with a hit, tying the program’s Division I record. Kachler leads the team with a .383 batting average in 2021, hitting six home runs along the way.

Sophomore right-hander Dominick Madonna took over pitching duties in the top of the third, locking down the FAMU offense. UNF had a golden opportunity when they loaded the bases in the bottom of the third, but nothing would ultimately come of this.

The Rattlers were far from being done, as they put up two runs in the top of the fourth to tie things back up at 3-3. However, the Ospreys were cooking up a response of their own. Getting things started in the bottom of the fourth was Alex Kachler, breaking the UNF record for most consecutive at-bats with a hit. A stinger down the third base line by Aidan Sweatt brought in two runs. Tanner Clark was able to follow with an RBI single to stretch the Osprey lead to 6-3.

Things would quiet down offensively in the fifth inning, with the score remaining the same. The Ospreys would go to the bullpen, bringing in Darin Kilfoyl to begin the sixth inning. Kilfoyl would hold down the fort, working through the FAMU offense with ease in the top of the sixth.

Just like their last outing, the Ospreys utilized a huge sixth inning as they posted five runs to bolster their lead to 11-3. UNF was able to utilize everything from walks to sacrifice flies in order to make the big inning possible.

FAMU would answer, but it wasn’t enough. The three-run effort brought the deficit down to five runs, but UNF’s offensive barrage was far from being done. The Ospreys were able to scrape together five more runs through uncommon methods to go up 16-6.

This large lead led to the game being called as a run-rule ending. Wednesday’s offensive showcase was the third game in a row where the Ospreys scored at least 10 runs.

UNF will next be in action this weekend as they travel to Fort Myers to face the FGCU Eagles for a three-game series, which will be pivotal in their seeding for the upcoming ASUN tournament. Friday’s game will start at 6:30 p.m., Saturday’s at 2 p.m., and Sunday’s at 1 p.m. The games will be available to watch on FGCU Baseball’s YouTube channel. Follow along with Spinnaker for the latest on UNF baseball.