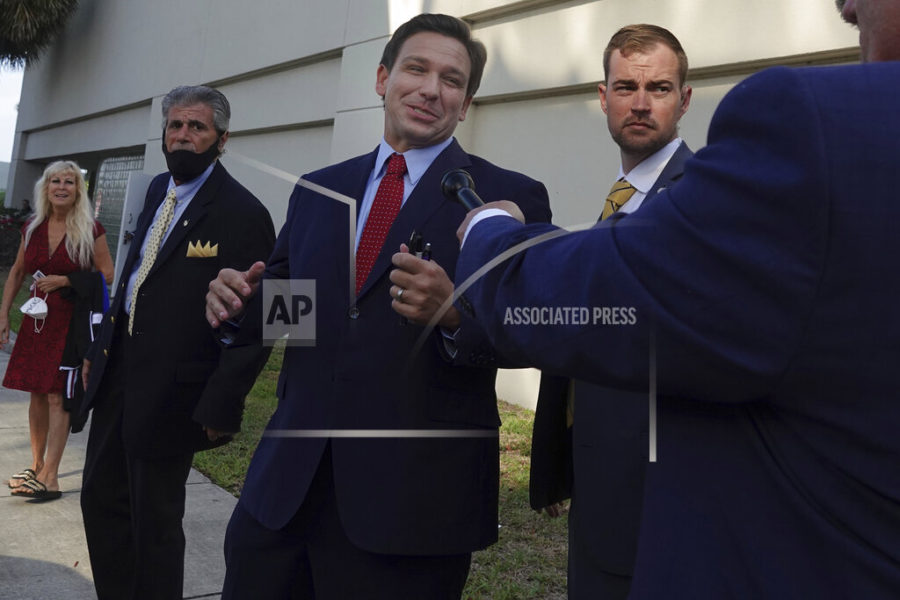 Florida Gov. Ron DeSantis leaves the site of an appearance, Thursday, May 6, 2021, in West Palm Beach, Fla. DeSantis has signed a sweeping elections bill into law that he and other Republicans said would place guardrails against fraud, even though there were no signs of voter irregularities in the November presidential election. (Joe Cavaretta/South Florida Sun-Sentinel via AP)

On the heels of Georgia’s infamous new voting law, Florida Republicans introduced their own voting law, and it was quickly passed by the legislature and signed by Gov. Desantis. UNF Political Professor Sean Freeder helped provide Spinnaker with some insight on the new law.

Freeder first explained how this is a very complicated law with many different parts and provisions.

“The biggest part of the new law is what it does to drop-off boxes,” Freeder said.

Freeder explained how this law made it harder to drop off ballots in many different ways, such as restricting hours and locations where ballots can be dropped off. It also increases identification requirements to request a mail-in ballot.

He also explained how the law is very similar to the aforementioned Georgia law, but it differs in many ways from it. Namely, it does not explicitly restrict access to food and water among voters, which was arguably the most controversial aspect of the Georgia law.

“This law, compared to the Georgia law, is not as severe.”

Another factor that Freeder hypothesizes contributed to the negative response to the Georgia law was the fact that it was the first, but not the last, law of its type to pass. Therefore, it received more media attention than most others, which might have prompted the large amount of corporate pushback to the law.

Many Democrats criticized the law as being a form of voter suppression, and Freeder agreed to an extent.

“This is what I would call weak voter suppression,” Freeder said.

Freeder elaborated on  how this would have little effect on hardcore voters, but would mostly affect the turnout of people who were considering voting, or too lazy to go through the steps, effectively turning them away from voting. While he did agree that it was suppressing some votes, he was uncertain of whether or not that was intended.

Florida had a relatively stable election compared to most recent years, wherein Florida had developed a bad reputation for election issues. Former president Trump has routinely called out nonexistent fraud in the 2020 election, and Freeder believes that this most likely had an indirect effect in encouraging Republicans to implement these new restrictions.

According to Freeder,  part of the law may be designed to marginally decrease voters who may favor democrats, while it is also designed to regain the trust of Republican voters. A great number of Republican voters believe Trump’s false claims of fraud, and may not have voted unless changes were made to secure the election process.

It will likely not be until the midterm elections in 2022 that the full effects of this new law are seen.

The entirety of the new law can be read here.