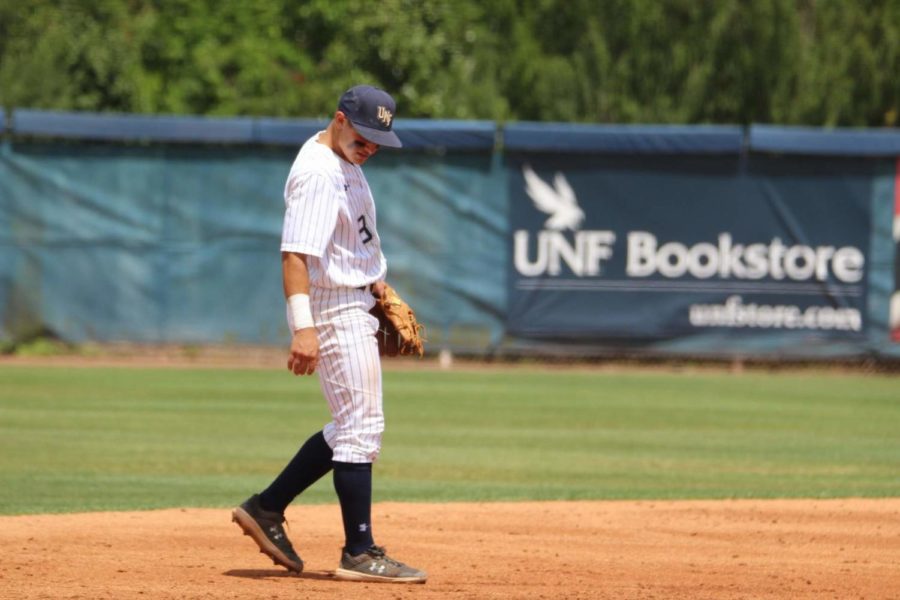 After a hard-fought victory on Thursday, the Ospreys were back in action with a trip to Championship Saturday on the line. Their opponent: the Jacksonville Dolphins, a team the Ospreys had previously beaten six times this season.

If there’s one thing that can be dangerous in a conference tournament, it’s a team with momentum. This went both ways, though, as both the Dolphins and the Ospreys entered Friday’s showdown with some added swagger. UNF carried with them a four-game win streak, while JU was fresh off of an upset win over the Liberty Flames on Thursday.

Starting at pitcher for UNF was utility man Austin Bogart, while Mike Cassala did the same for JU. Bogart got off to an excellent start on the mound, sitting the Dolphins down in order in the top of the first. Conversely, the Ospreys bats were alive early. Isaiah Byars singled up the middle and was subsequently brought home when Abraham Sequera drilled a no-doubt home run to right field.

Now with a lead, Bogart continued to deal. Through the first three innings, JU didn’t have a single baserunner. This would come to an end in the top of the fourth with a Dakota Julylia single, but nothing would come of it as JU’s offensive woes continued.

Things went quiet for both teams until the bottom of the fifth when a sacrifice fly by Tanner Clark brought in Justin Holmes to score. The Ospreys weren’t done adding to their lead, as Sequera hit another home run, just clearing the fence in right field. Now up 4-0 and with the JU bats still asleep, things looked up for UNF.

This sense of peace would abruptly come to an end in the seventh when JU’s Duncan Hunter launched a three-run home run to narrow the deficit to just one run. Bogart would shake it off, pitching late into the eighth before being pulled. Stepping in was the reliable Stephen Halstead, but his work was cut out for him. Inheriting the tying run at third base, Halstead struggled and threw a wild pitch that brought in the tying run.

It was gutsy, but the Ospreys escaped the eighth, only giving up one run. Now the pressure turned to the UNF offense. Cade Westbrook got on with a single, but a double play would end the inning. Halstead rebounded with a solid top of the ninth, and the Ospreys entered the bottom of the ninth with a chance to walk it off.

It was up to the bottom of the order for UNF to get something going. After two quick outs, Justin Holmes was able to work the count and get a walk. Up next was Tanner Clark, who also worked the count to get a walk. Isaiah Byars was able to make contact, but it resulted in a fly ball that would end the inning.

Now in extra innings, the Dolphins were able to get a runner to third, but a flyout to right would end the inning. The offense remained in limbo for UNF, as they couldn’t get much going in the tenth inning.

Trouble abounded in the top of the eleventh, as JU put runners on second and third. The Dolphin comeback reached its climax when Jackson Grabsky knocked a two-run double into the gap, giving JU a 6-4 lead. A failed double play would bring in another run, making it 7-4. To add insult to injury, JU would tack on one more run to make it an 8-4 lead.

A two-out RBI single by Tanner Clark would narrow the gap to 8-5 in the bottom of the eleventh. The mini-rally would come to an end with a flyout. The Ospreys would now have to beat Liberty just an hour later to keep their hopes alive.

Playing an 11 inning game and then having to face off with a team who won almost 40 games this year less than an hour later is not exactly ideal. Worn out from their previous game, the Ospreys looked elimination square in the eye.

While it wasn’t as big of a win for Liberty as many would have expected, the Flames still prevailed 5-2. JU then clinched the ASUN title with a win against Liberty on Saturday.

It was an uphill climb for most of the season, as the Ospreys only spent two days in 2021 above .500. Despite dominating the Dolphins for a vast majority of the season, the Ospreys couldn’t do this when it mattered most. This is what cost them.

UNF is still yet to win a baseball championship in the ASUN, something that has lingered above the program since its jump to NCAA Division I competition. Early on Friday, it seemed like this may no longer be the case. However, the Dolphins showed resilience and penned the death sentence for UNF’s 2021 season, with Liberty finishing the job.