The air is stirring on the top floor of the Student Union, as Senate President Rachel Saunders is waiting to hear if she’ll be impeached. Former Senator Lucas Mougeot accused Saunders of violating the Student Government’s Code of Ethics because of what she didn’t do in a group chat. Spinnaker has obtained the rest of that original explosive GroupMe chat that landed Saunders in hot water. That chat took place during an emergency budget hearing called by Saunders on Feb. 17, 2021. The GroupMe chat expressed dislike for SG President Selma Besirevic, UNF President David M. Szymanski, and another senator; in addition to talk of bullying, bongs, and booze.

So why is Senate President Saunders on trial?

Spinnaker is unsure why Saunders is on trial and not the people who actually made the concerning jokes.

It all started with the emergency senate meeting for the SG budget in which Saunders says in an email that they must conduct themselves professionally during the meeting. However, in the GroupMe chat called “ha ha friends” that was held during the budget meeting, some senators behaved anything but professionally. 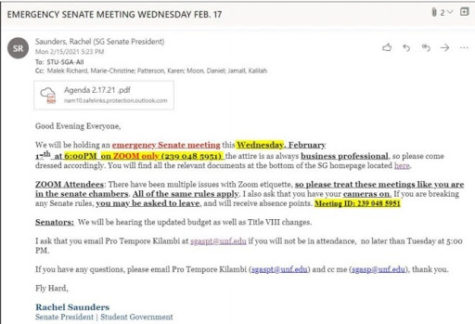 Key figures in the chats: 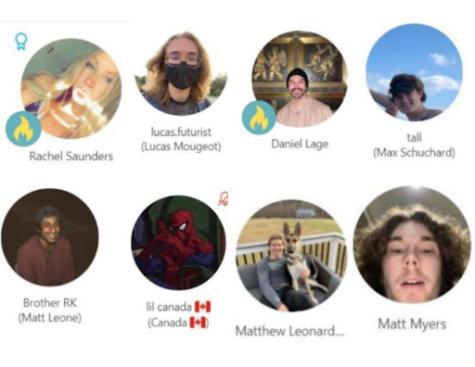 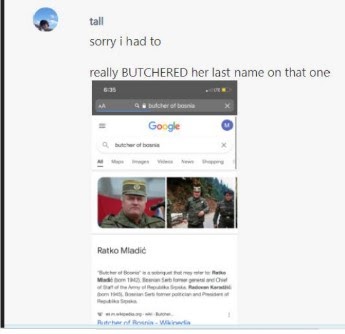 The ‘Butcher of Bosnia’ was a Bosnian Serb military leader, Ratko Mladić, who masterminded the Srebrenica massacre, the worst episode of mass murder within Europe since World War II.

In the screenshot below, Saunders discussed an interaction with Besirevic in which Saunders  expressed recent hardships in her life and Besirevic responded with “we all go through things ur only human.” Senator Daniel Lage responded to the text about now SG President Selma Besirevic by saying “Is she mocking you for being human? Sorry she’ll never be human. She’ll never know what it’s like. All she’ll ever know is being Bosnian.” Among the likes for the message, was Senate President Rachel Saunders’. 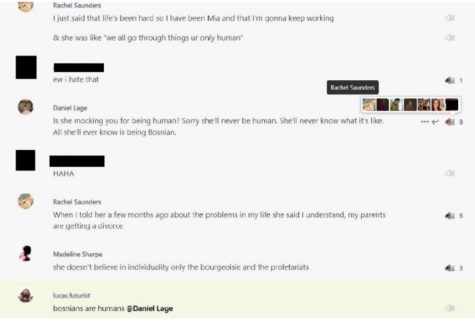 This is one of the statements that Senator Mougeot grew concerned about.

At this point, Senator Lucas Mougeot confronts Senator Lage’s comment by saying that Bosnians are humans, to which Lage responds that he just doesn’t know enough Bosnian history. Again, Senate President Saunders was among those who liked Lage’s comment.

In the June 2 UNF Supreme Court Hearing, Mougeot said he raised his concerns to both Senate Pro Tempore SaiRahuil Kilambi (RK) and Senate President Saunders that same evening. Saunders says she contacted Senator Lage, the one who made the joke, that night and not only expressed her disapproval, but told him to knock it off.

Senate President Saunders then followed up with texts to Senator Mougeot about his concerns: During the court hearing, Senator Lage was called as a witness and said that he didn’t see the statement as racism, but a play on President Besirevic’s campaign slogan: “human is human.” She repeated the slogan at various events and meetings.

“I still stand by the fact that it was nothing more than a joke, and any search for deeper meaning — you’re not gonna find it,” said Lage.

Mougeot claims that Saunders, as a leader, should’ve put a stop to the chats. According to the judicial hearing, Saunders maintained she did not say or write anything discriminatory and took some action to stop it. She says that she doesn’t have the power to fire Lage or control what he says.

In that same hearing, Senate President Saunders mentioned that this Feb. budget meeting was her first meeting since a personal tragedy.

“It was two days after I had experienced a tragedy. I was doing it over Zoom in my sister’s bedroom,” said Saunders. “I had just come out of a hiatus and was not in a good state of mind and I had actually put Pro Tempore Kilambi in charge of almost everything.”

“My liking of a group message GroupMe, or a message in a GroupMe, does not constitute differential treatment of any individual. And my existence in a group chat does not hold me accountable for the actions of my peers.”

Senate President Saunders also presented her own evidence at the hearing where she showed a chat when she shut down inappropriate jokes.

Saunders closed the Supreme Court hearing saying that there is no evidence of discrimination against her.

“The entirety of this complaint and his time on the stand, he expressed his disdain for comments made by my peers, but not myself. Additionally, Mr. Mougeot speaks about senators speaking during a Senate meeting, but fails to cite any statute/title that he believes it’s in violation of.”

In the same GroupMe chat at the same budget meeting, SG members expressed their dislike for Syzmanski, Senator David Catone, and talked about bongs, as well as having a beer drinking game. The senator who filed the complaint against Saunders was present for some, but not all of the following discussions.

The screenshot below shows some members dissing Szymanski for making what they call awful decisions. They talk about how SG has some power over Szymanski because the Student Body President sits on the board of trustees. 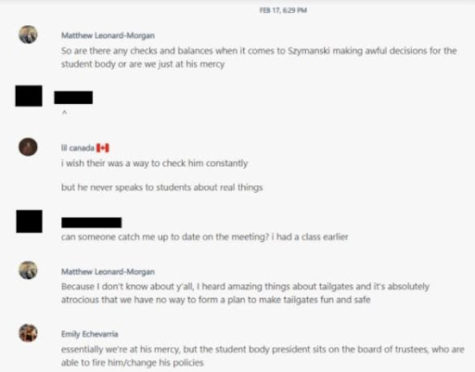 They also set their texts on a senator asking too many questions.  The three screenshots below are of a number of memes directed towards Senator Catone and Besirevic. 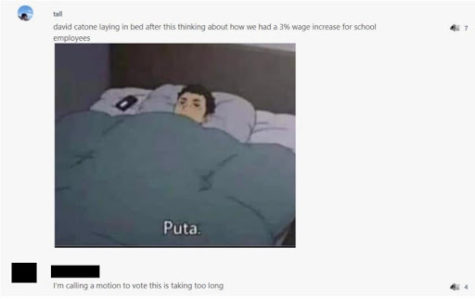 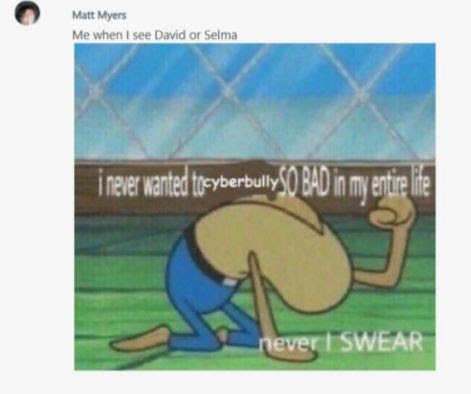 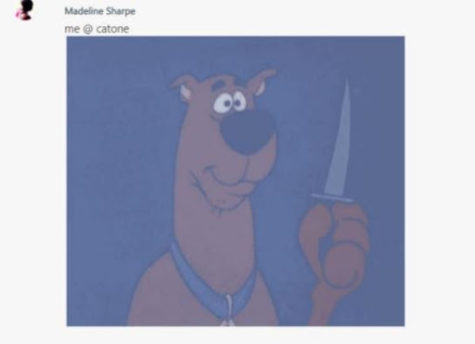 Members go on to discuss creating a drinking game centered around how many times they hear Senator Catone ask a question. One agrees they will match the member who suggested the idea. A third member said that they would match the number of beers with “bong rips.”

Member Matthew Leonard-Morgan joked about a conflict of interest that Senator Catone may have with the Lend-a-Wing program, referencing “skinsuits.” 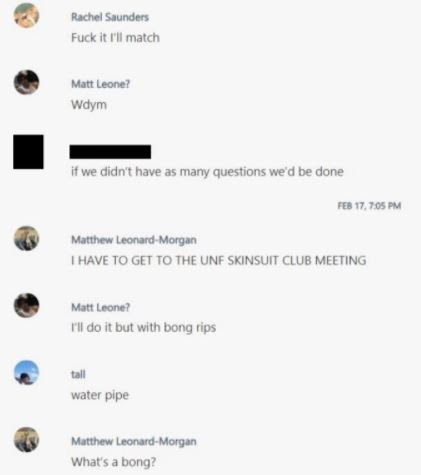 Some of these elected officials — paid by students’ activity and service fees —  are openly mocking UNF in the chat — during this emergency SG budget hearing. 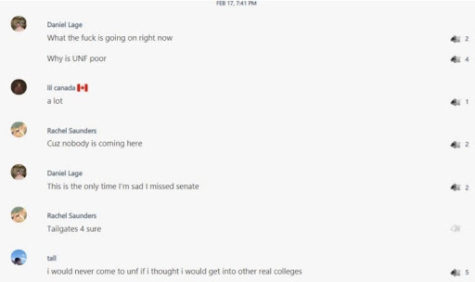 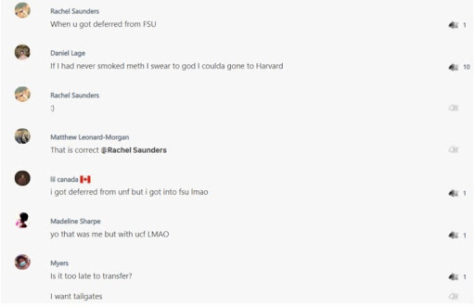 Members joke about getting a “bully-for-hire” to deal with Senator Catone, as well as making him “regret ever being born.” 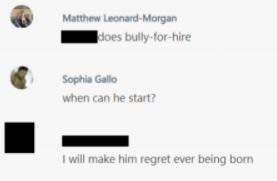 Spinnaker is trying to determine whether any of these other senators in the chat will face disciplinary action, especially those who actually made the concerning jokes.

The full Student Government Senate will soon decide the fate of Senate President Saunders, after being on trial for violation of the accused charges in both the UNF Primary Court and Supreme Court.

Update: [At the time of the completion of this article, the UNF SG court found Rachel Saunders not in violation of multiple titles, and in violation of only one title. Spinnaker is releasing an update on the new court decisions.]