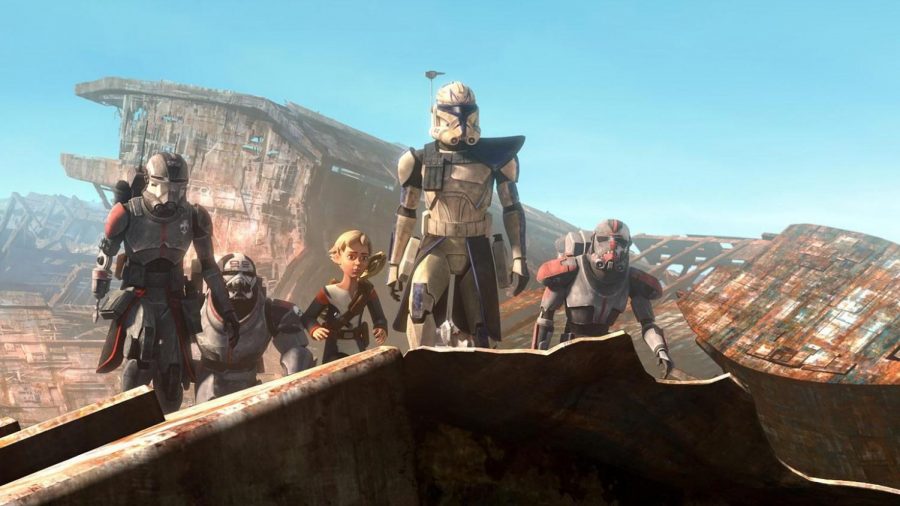 The story seems to be ramping up as a familiar face appears on this week’s episode of “The Bad Batch.”

The episode “Battle Scars” begins with the group after a series of mercenary jobs when they are suddenly approached by everyone’s favorite clone and one of my favorite Star Wars characters, Rex. It’s revealed that he was the one the Martez sisters contacted at the end of the last episode, and now he’s with the group to help them remove their inhibitor chips before they activate. They then journey to the junkyard world of Braaca where they find a Jedi Cruiser that potentially has the technology they need to remove the chips in their heads. Time is limited however as Wrecker’s headaches are becoming worse and more frequent, which leads to trouble for the rest of the team.

As a long-time fan of “Star Wars: The Clone Wars,” seeing Rex show up here was something I’ve been hoping would happen in this series. It was a surprise to be sure but a welcome one. He’s given this cool introduction that looks like it was brought straight out of a western. With the brief shootout, and him silently coming up from the background to remove his hat. It was a great comeback fitting for the character. From what we’re shown, Rex has been keeping busy since surviving the end of the Clone Wars. While he’s not doing mercenary jobs like the Bad Batch are doing, he makes it clear that he’s aiding rebel forces to combat the newly established Empire.

It’s a good thing that Rex made time to show up here, as there’s still the issue of the Bad Batch not having removed their inhibitor chips yet. The whole plotline with the inhibitor chips has been haunting the group since the beginning of the series. After all, it was what caused Crosshairs to turn on them, and is causing Wrecker to act out in ways that will eventually cause him to give in to Order 66. It was a smart choice for the writers to have the characters finish off this plotline now, instead of having it grow into a big problem in future episodes.

When we see them make their way to the world of Braaca, they do manage to get some cool shots of the junkyard world with the group making their way through a downed cruiser. While the planet doesn’t look as cool as it did in the game “Jedi: Fallen Order,” it felt like an appropriate setting that would naturally create suspense for the characters.

The episode goes into more dangerous territory as the Bad Batch navigates through the cruiser. While they do face some dangers along the way, they manage to make it to the medical bay where they can remove the chips in their heads. However, things take a dark turn when Wrecker inhibitor chip clicks in and he gives in to the protocols of Order 66. While I was expecting this to happen at some point during the episode, it was still unnerving to see. It’s a tough situation as it’s one of the main characters shooting at his friends. Things get even more intense when Omega steps in and Wrecker goes full “Jack Torrence” mode as he chases her through the damaged ship. This scene was especially intense in a suspense thriller-type way, as it’s been established that Omega sees a brother figure in Wrecker. Eventually, Wrecker is stunned by Rex at the last minute and has his inhibitor chip removed soon after.

After Wrecker is subdued, the episode cuts to everyone already having had their chips removed. When Wrecker comes to, he’s understandably guilt-ridden after going off on the group. But don’t worry, it’s all good as Omega shares some Mantell Mix with Wrecker as a fun tradition after completing a mission.

With everyone’s chips removed Rex starts making his way to meet someone, before having a final word with Hunter. It’s pretty obvious that Rex is still in the game as he’s spent his whole life defending the Republic, and he’s not gonna stop now. He believes that the Bad Batch’s skills can be put to better use in restoring the Republic. Though Hunter makes it clear that he’s trying to figure things out and do what’s best for his team. Hopefully, this is a sign that the Bad Batch are going to be joining the main conflict sometime in the future. While it is enjoyable to see them take on mercenary missions on different worlds, I am interested to see what this group will do fighting the Empire.

Little do they know that their troubles aren’t over yet, as a group of scrappers is watching them from a distance and plans to have the Empire notified of their presence. Does this mean that our characters’ battle with the Empire will come sooner than expected? Find out next time on “The Bad Batch.”