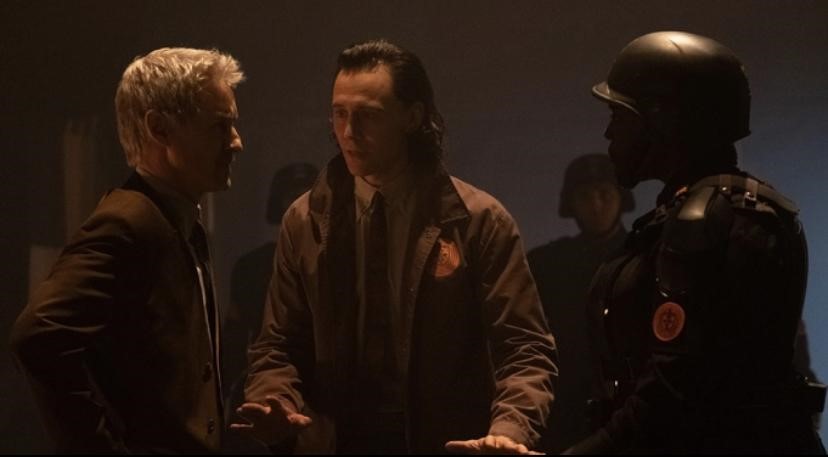 After the first episode surpassed multiple people’s expectations, let’s see how they are going to react to episode two. Because wow does this show keep going in all the right places.

The mysterious Loki variant from last week is back and is continuing to wreak havoc on the timeline. Most recently in 1985 Oshkosh, Wisconsin. Mobius leads the T.V.A. with Loki in tow to see what the variant will do next. Rather than help them directly, Loki seems to be stalling the group as he seems more interested in meeting the omnipotent “Time Keepers” than completing the mission. This causes discord among the time agents, most between T.V.A. judge notably Ravonna Renslayer and Mobius who argue if Loki will be beneficial to their cause. Through eye-opening research and witnessing apocalyptic events, Loki’s true colors are revealed as he comes face to face with the new variant.

It’s nice to finally get the plot started after all the exposition in episode one. When the episode starts we get a good glimpse at what the Loki variant is capable of in the opening scene. We see how this particular Loki is able to “body swap” with multiple people as it takes over the minutemen’s squad leader and wipes out the rest of their team. It’s a quick brutal scene that gives the audience an idea of what this character is capable of. It also helps that it’s juxtaposed creatively with Bonnie Tyler’s “Holding Out for a Hero” that adds an ironic feel given it’s in a series revolving around one of Marvel’s top villains.

It is from here that we come back to Loki catching up to speed with the T.V.A. guidelines while sharing fun banter with the organization’s mascot “Miss Minutes” (voiced by the great Tara Strong). It’s a fun scene that shows the character getting used to the environment that he’s currently in, even though there are a few things that he isn’t quite informed of. When the mission starts it’s made quite clear where these people stand. With the minutemen elaborating on the rules/guidelines, and Loki who has other plans in mind. Despite Loki seemingly being cooperative with the group, there is still this understandable sense of distrust between him and the agents.

I like how they portray Loki in this episode, as a lot of his actions and interactions with the other characters keep people questioning what his true intentions are. When the investigation begins, it becomes a sort of a battle of minds as you’re wondering what Loki’s endgame is. While he seems willing to help the team, his deceitful advice makes it become clear that he has his own agenda with the T.V.A., particularly with meeting the mysterious Time Keepers. This is a perfect setup as it not only generates genuine conflict and tension, but it also stays faithful to  the character’s mischievous nature.

Naturally, Loki’s questionable actions create a lot of distrust between the characters, particularly Mobius and Ravonna who discuss the pros and cons of keeping someone like him around. With that said, we do learn more about the T.V.A.’s settings, such as the Time Keepers and how nobody has ever met them in-person. What could this lead up to is anybody’s guess, but it’s definitely something that’s gonna lead to some form of payoff later in the series.

The fun chemistry between Tom Hiddleston and Owen Wilson is once again one of this series highlights as their personalities make for some great interactions. While you can definitely see them work well with one another, there is still that rift between them with how Mobius continues sticking up for Loki despite the god of mischief stalling the mission. The episode then goes into research mode as Loki and Mobius go through the T.V.A. archives to look and see if there is any connection between the Variant and the places it’s been to. It’s here where we see Loki find the file for Ragnarok, which of course ties back to the film “Thor: Ragnarok” where Asgard was destroyed and the majority of its people perished. Loki’s somber reaction to these events turns to intrigue when he discovers a potential loophole in the timeline that could help them catch the elusive variant.

This leads to an entertaining scene where Loki explains his theory to Mobius using a bowl of salad as a metaphor. Loki believes that the variant is hiding before apocalyptic events throughout history as any actions prior would not change or upset the flow of time. This theory is eventually proven when Mobius and Loki take a quick trip to Pompeii before it is destroyed by Mount Vesuvius. It’s a bizarre scene where Loki proves his theory by doing a lot of strange things such as causing mischief among the townspeople and even telling them beforehand of their town’s impending fate. Despite these random acts, they don’t cause any harm to the timeline which narrows down where the variant might be hiding.

After testing out Loki’s theory, Mobius locates the variant’s location at a Roxxcart store in 2050 Alabama before it is destroyed in a flood. Even though the scene is not as futuristic as most people thought it would be, they still manage to make the most out of it and give us some great buildup to the variant. This is shown when the team splits up and Loki comes across the variant body-hopping from the minutemen and stores employees’ as it converses with him.

This is an entertaining scene as you’re basically seeing multiple people act out Loki’s typical personality and mannerisms. I can imagine these actors must have put a lot of effort into replicating this character, which does add a lot of surreality to this scene. It is here that the main Loki reveals his goal is to overthrow the Time Keepers and take over the T.V.A. himself, seeing as how he views it as the greatest power in the universe. His offer for the Loki variant to join him is refused as it is revealed that it has other plans. This is shown when it activates all the reset charge it stole from the minutemen and sends them to purge various sections of the timeline where they create havoc.

If that wasn’t enough, the variant reveals herself to be a female version of Loki (Lady Loki). I have heard rumors that something like this would happen in this series, as this was something that has happened in the comics. You can tell the creators wanted to find a way to work this character into the show, and this was a clever way to do it. The episode leaves on a cliffhanger as Lady Loki makes her escape via a time portal that tempts the main Loki to follow. As Mobius rushes in on the scene to try and convince him to come back, Loki runs through the portal to find out more about this mysterious version of himself.

It’s hard to think that we’re only two episodes in and so much has already happened. Between the changing settings and invention of new rules, this episode opens new doors while still keeping people questioning what direction the series will take us. It’s only going to get more chaotic from here, so let’s see what happens next week.