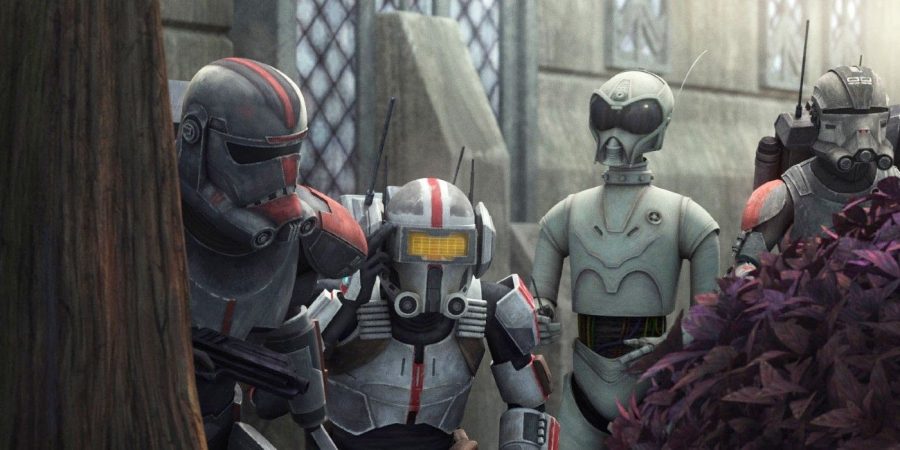 We return to “Bad Batch” with an episode that takes the group into new territory, albeit with familiar elements as they undertake a mission that challenges their ideologies.

The episode “Common Ground” takes us to Raxus, the former capital of the Confederacy of Independent Systems (Separatists). The Empire is occupying the planet and is forcing its senator Avi Singh to encourage his citizens to comply with their demands. However, rather than give in to his oppressors, he publicly announces that he can’t condone the Empire’s actions, and wishes to put the needs of his people first. Singh is subsequently arrested as his droid GS-8 contacts Cid who then tells the Bad Batch to rescue the senator to pay off their debt.

The Empire forcing its presence on other worlds has been seen numerous times in films, shows, and even games like “Battlefront.” However, this episode uses this setup to show in context what happened to the planets aligned with the antagonists from the Clone Wars, and how the people responded to the new regime. I feel it’s important to understand that despite their previous allegiance in the previous conflict, the writers smartly portray the people as civilians who only want to maintain their independence and not be dominated by a corrupt government. There’s even a great episode in “Star Wars: The Clone Wars” called “Heroes on Both Sides,” where they show that the supposed “bad guys” aren’t what most people say they are. In reality, they are very much like the people who were aligned with the Republic. This portrayal makes it all the more realistic as there is hardly any conflict that’s black and white. At the end of the day, it’s just people who want what’s best for themselves and have their voices be heard.

This makes it ironic when you realize that they’re once again being roped back into a government that doesn’t have their best interests. When Senator Singh considers following the Empire’s demands, you relate to the position he’s in as he only wants to protect his people. This desire ultimately has him publicly tell the masses that he openly disapproves of the Empire’s occupation. Seeing the people voice their support for the senator’s defiant decision makes this moment feel real as it’s very reminiscent of worldwide protests throughout human history. It’s especially made realistic when the Empire brings in massive AT-TE walkers onto the scene, to intimidate the crowd into submission. To be honest, seeing the clones roll in with big machines for the Empire was a little bit jarring to see, as I’m so used to associating this image with the good guys. It really sells the point of how the galaxy is moving into a new era, and massive changes are being made.

Meanwhile, the Bad Batch is about to lay low due to the events from previous episodes, until Cid comes in and gives them the job to rescue the senator from Imperial custody. The titular group (particularly Echo) is understandably hesitant to take the job, as they practically spent their whole lives fighting the Separatists. They also want to keep Omega safe after recently having to rescue her from bounty hunters. Not wanting to turn down the opportunity, they agree to take on the job while Omega stays behind with Cid. Hunter doesn’t exactly trust Cid, but it’s obvious she intends to watch out for Omega in exchange for more credits. Naturally, this results in a bit of a rift in the group since Omega is part of the team and wants to help out. Though Hunter forbids her as he orders her to stay on Ord Mantell.

Upon landing on Raxus, the Bad Batch makes contact with Singh’s droid GS-8, who was the one who contacted them in the first place. The group agrees to follow her, despite Echo’s suspicions. Since they were going to have this prejudicial mindset play a role in the plot, it makes sense to have Echo fill the role. After he was made a prisoner of war and turned into a cyborg by the Separatists, it’s understandable why he would feel this way.

When they make their way to the city streets, they are crawling with Imperial clones as well as numerous AT-TE walkers patrolling the area. They shortly and effectively take out the troopers in their way, albeit stunning them instead of outright killing them. I’m sure the writers made this choice to juxtapose with the main characters’ previous actions from earlier episodes.

They manage to break into the compound and rescue Senator Singh right as he was about to be tortured by an interrogator droid. The group then makes a hasty escape as they forcefully commandeer one of the AT-TE walkers, which results in a chase throughout the streets. This was a fun sequence to watch as you’re seeing the characters have a game of cat and mouse while being chased by giant mechs in the city. It creates a good amount of suspense as multiple enemies come at the group from all sides, making it difficult for them to make their getaway. Plus, who doesn’t want to see some walker-on-walker action?

The group eventually escapes thanks to Senator Singh’s helpful advice of blasting a hole in a street corner, which leads to a subterranean passage out of the city. They manage to cover their tracks and reach their shuttle, but senator Singh feels conflicted about leaving his people behind. The group makes it clear that he can’t help them if he’s in Imperial custody, and Echo tells him “to live to fight another day.” This isn’t the first time this lesson has been shown in Star Wars, as the show’s predecessor had several moments like this where a character has to make a bitter choice so that one day they can help those in need at another time. I also like that they gave Echo this line; it shows him overcoming his prejudice toward the former Separatist.

The episode also has a B-plot where Omega is down in the doldrums after being left out of the mission. Cid catches up on this and encourages her to do something about it if she doesn’t like it. Omega’s time comes when it’s revealed she has a talent for strategy, as shown when she makes smart moves in the holographic game, Dajarik. Fans of Star Wars are familiar with the game, as it was shown in the first movie in a scene between Chewbacca and R2-D2 on the Millenium Falcon. It’s bizarre because even though we don’t quite know the rules of the game, it’s still a recognizable piece of the Star Wars lore. Cid catches up on Omega’s talent and offers her a good amount of cash for winning some bets. As far as B-plots go, this one was enjoyable. It could have been so easy to have it be nothing but filler, but thankfully they use it to show the development of Omega’s character.

By the time the Bad Batch returns, patrons are already lined up at the bar as Omega is on a successful winning streak as she outsmarts even the smartest of players. At first, Hunter is a bit annoyed as Omega was supposed to keep a low profile, but Cid reveals that Omega’s winnings helped pay off the group’s debt to her. Realizing he may have been too tough on Omega, Hunter agrees to a game of Dejarik with her saying she won’t sit out any missions if she wins. The episode ends before the match ends, so it’s safe to assume that Omega will be in on the action in the next episode.

Overall, “Common Ground” was an enjoyable sit-through that shows the grey area of the conflict, while still retaining character and heart that makes these adventures worth watching.