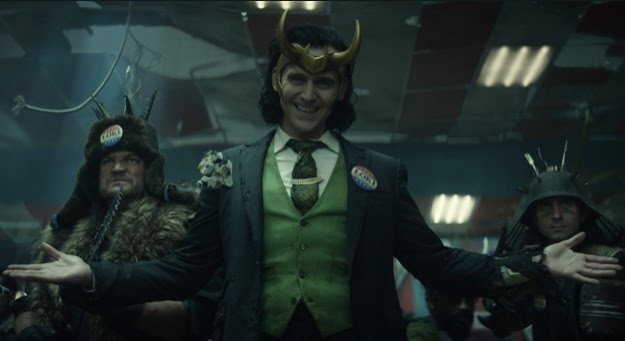 Black Widow may be coming out this week, but don’t think that’s gonna stop me from talking about this week’s episode of “Loki.” After that big tease at the end of the last episode, we could tell that Marvel was pulling out all the stops for this series. And boy did they! With the amount of Loki’s, easter eggs, and directions this episode has gone in, it makes sense why a series on this character was made to begin with.

We come back to Loki after he ends up in “the Void,” a dimension at the end of time where everything the T.V.A. prunes end up. It is here that he comes across multiple versions of himself. Including Kid Loki, Alligator Loki, Boastful Loki, and Classic Loki. They’re in danger as a cloud entity called Ailoth threatens to wipe them out before they find any way to escape. Meanwhile, Sylvie learns everything she can from Renslayer before she drops into the Void to save Loki.

This episode is immensely enjoyable for Marvel fans of the comics and films. Right off the bat, we see Loki get acquainted with different versions of himself as they traverse such a strange and hostile environment. At first, he’s not given much information as the group of Loki’s are more interested in getting to their safe spot, rather than give him an idea of what’s going on. Based on the trailers, the Void was believed to be an apocalyptic version of New York. However, it’s shown to be more expanded than that as it is portrayed as a hodgepodge of so many different elements from different timelines. You have random space crafts, decayed monuments, etc. The one element that does pique our character’s interest is this creature called Ailoth, which is shown to be a cloud-like monster with red eyes that functions like a guard dog chasing its prey. It sounds outlandish, but it’s what you would expect from a place like this.

The easter eggs here are too many to count, as the people behind this show pull out every familiar and bizarre image from Marvel’s history. I can’t go through them all here, so I’ll just give you the basic rundown of the biggest ones. Some of the more obvious Easter eggs include the destroyed Avengers tower from the trailers, a broken down S.H.I.E.L.D. helicarrier in the background, and even a Kree ship from “Guardians of the Galaxy.” But what surprised me most was how this episode included the more stranger elements from Marvel comics. These easter eggs include the Thanos copter (which did make me laugh). A cutaway to a Frog version of Thor, trapped in a jar underground, reaching for his hammer. Even the episode’s title “Journey into Mystery” is a clever homage to the comic series where Thor and Loki first appeared. I feel like anybody who bet that Marvel wouldn’t be bold enough to include these crazy easter eggs, should pay up big time after this episode.

Once the characters reach safety in their secret lair, they take a little bit of downtime and talk about each other’s backgrounds. This was interesting to see, as variations of a character like Loki with different histories are both revealing and very entertaining. The head of the group is revealed to be Kid Loki, as he killed his brother Thor during their childhood in his timeline. Boastful Loki is naturally exaggerative, as he claims to have killed Iron Man and Captain America, as well as have all six Infinity Stones in his timeline. However, his allies say this is a lie. Alligator Loki might be my favorite of the group as this idea is so bizarre that even the characters just accept it. We then come to Classic Loki who reveals that he went on the same path as the main Loki did in the original timeline. But instead of sacrificing himself to save Thor from Thanos in “Avengers: Infinity War,” he fakes his death and escapes to a nearby planet. The loss of his loved ones weighed heavy on him, causing him to try to leave and get captured by the T.V.A. This cast is a colorful group of characters, to say the least. You might even say this episode has a “Spider-Verse” vibe to it, but instead with multiple Loki’s.

Things seem to be cool between these characters, but anybody who’s familiar with Loki knows that trouble is not far away. This is shown when main Loki tries to leave but is intercepted by a gang of random variants, led by President Loki. Tom Hiddleston also plays this character, and you can tell he’s having a ball playing dual roles in this scene. This character is an obvious sendup to the “Vote Loki” comics run where Loki is running for U.S. President in the Marvel universe. With all the different variations that this show has brought us, this was a fun addition to include in this episode. It’s revealed that Boastful Loki betrayed the main characters for President Loki for a throne, but naturally the latter goes back on his word. Seeing as how they essentially have the same interests, it makes sense why both parties would be at odds with one another. It eventually results in the characters attacking one another and a fight ensues. The brawl between Loki’s was brief but very entertaining. You have Alligator Loki biting off President Loki’s hand which was very funny. You have Classic Loki throwing illusions all over the place. It’s a house of madness, and I friggin’ love it.

On the T.V.A. side of things, we see Sylvie try to get as much information as possible about the T.V.A. origins. It’s revealed that every timeline branch isn’t destroyed, but instead transferred to the end of time where they’re left to rot. Sylvie tries to force Renslayer to get her into the Void. However, Renslayer is more interested in buying time as minutemen show up to prune Sylvie. Seeing no other way out, Sylvie prunes herself sending her to the Void where she comes across Mobius as they look to find Loki. With the case seemingly solving itself, Renslayer herself starts showing signs of doubt as to who is in control of the T.V.A. But instead of bringing the truth to light, she’s merely getting to the bottom of it so she can know who she’s protecting.

While the episode is creative with its premise, it’s also excellent at inserting a good amount of heart into it. When Sylvie and Mobius find Loki and his counterparts, they take a breather as Loki and Sylvie have some time alone together. I know it’s odd because they’re both basically the same person, but you feel the chemistry they share with each other. Mobius and the Loki variants also have some good conversations with one another. With Richard E. Grant as Classic Loki showing the most development throughout the episode.

The group plans a way to enchant Ailoth and see who it’s guarding at the end of time. The job is easier said than done as we see it wipe out the entire USS Eldridge battleship that was involved in the Philadelphia experiments of 1943. Despite this, they still continue with their plan as the Loki variants make their leave. Main Loki and Mobius also share a heartfelt goodbye when Mobius uses Renslayer’s stolen time pad to go to the T.V.A. and spread the truth.

Loki and Sylvie’s attempts to enchant Ailoth don’t seem to work until Classic Loki comes in and distracts the creature by creating a massive illusion of Asgard. I appreciate the size and scope used in this scene as the visual effects were very creative during this sequence. It eventually results in Classic Loki sacrificing himself as Loki and Sylvie manage to enchant Ailoth.

On the other side of the smoke cloud is what appears to be a citadel-like castle, with a lit-up tower at the center. The episode ends with the duo making their way to the unknown location. Even though there is no end credits scene, I still have an idea of what this could mean. The most prominent theory being that Kang the Conqueror is behind this. Taking the characters’ time travel element aside, it would make sense to have a large-scale villain appear in a series like this. Another factor is how Ravonna Renslayer’s character in the comics has a connection with the timelord in the Marvel lore. While I am preparing myself for this not being true, it’s hard not to see the pieces fall into place. Especially when Marvel announced last year that they cast Jonathon Major’s to portray Kang in “Ant-Man and the Wasp: Quantumania.”

This episode is insane and all over the place in the best kind of ways. It has creative characters, a large scope, and a concept that anyone excited for the multiverse can get behind. The cliffhanger already has me counting down the days to next week, so let’s see if this series can surpass our expectations and find its glorious purpose.