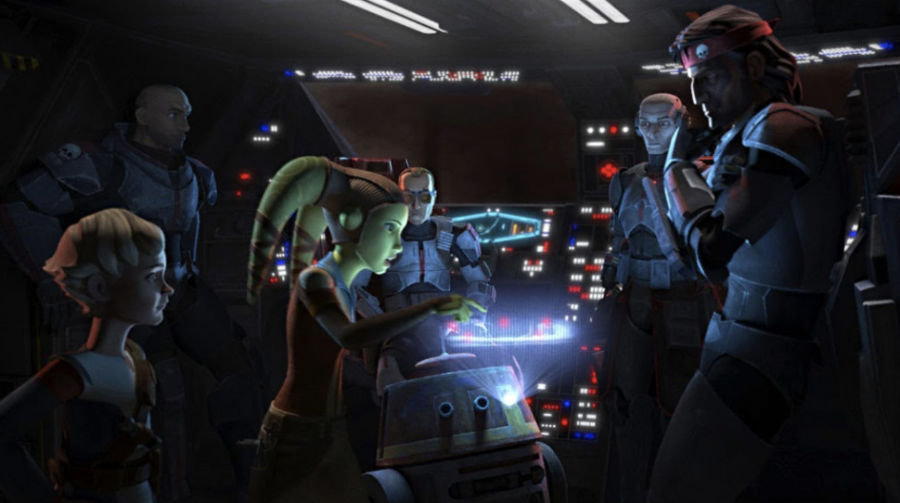 The Bad Batch are back in their starring roles as they take part in a rescue mission that puts them too close for comfort against the Empire.

This week’s episode “Rescue on Ryloth” follows where we left off with Hera escaping her captors after her parents and freedom fighters were captured. With no one else to turn to, she contacts Omega and the Bad Batch to help her free her family and leave the planet. The group understandably feels reluctant to take on this mission, as they don’t think they’ll be able to pull it off against near impossible odds. Will they be able to rescue the Syndulla family? Fans of “Star Wars: Rebels” know the answer to this. So if you’re unfamiliar, let’s go over it.

While I did enjoy the previous episode, I will say I am glad that the story is right on track as the titular characters have a major role to play here. It also helps that the people behind this storyline had the time to establish certain characters and details so that we can see how they unfold. We see how the Empire has tightened its grip on Ryloth, with Imperial troops having more of a presence on the planet. There are elements of discord sewn in, particularly between Clone Captain Howzer and Admiral Rampart. Howzer has already been established as more of an individual, when compared to most of his controlled brothers with him being able to make his own decisions and openly express his thoughts to his superiors. He starts to have his doubts on the Empire, after he witnessed Rampart have Cham framed for Senator Taa’s attempted assasination. Rampart, on the other hand couldn’t care less about the morality of the situation, and used the ploy as an opportunity to get Cham out of the Empire’s way. Howzer understandably has difficulty with this decision, as he’s sympathetic to Cham and his people’s cause. There has been debate among fans on whether or not his inhibitor chip malfunctioned, or if his relationship with the Syndulla’s had some effect on him. I do wish we got a clear reason for why he’s like this, but I also understand if it’s meant to be explained later or left to viewers interpretation. Whatever the case is, it’s clear the Batch members aren’t the only clones who can’t stand with the Empire.

When the Bad Batch are called in to save the Syndulla family, they are very reluctant about taking on the mission and the reasons are obvious. The planet has an overwhelming security that’s not only at every corner, but is also looking for them as well. I like how they decide to take time and go over their options before they make any decisions. It drives home the point that they have to be careful with what they do as any move they make can end in failure. I think Hunter says it best when he states, “Being strategic is also about knowing your limitations.” That’s something that isn’t shown a lot in shows like these, as it gives a sense of realism with how they don’t know what’s the right choice to make. It also helps that it’s not one sided either as we know they want to help, but the environment they are in makes it difficult. Though Omega convinces them to help since they are soldiers, they have an obligation to help anyone who is in trouble. 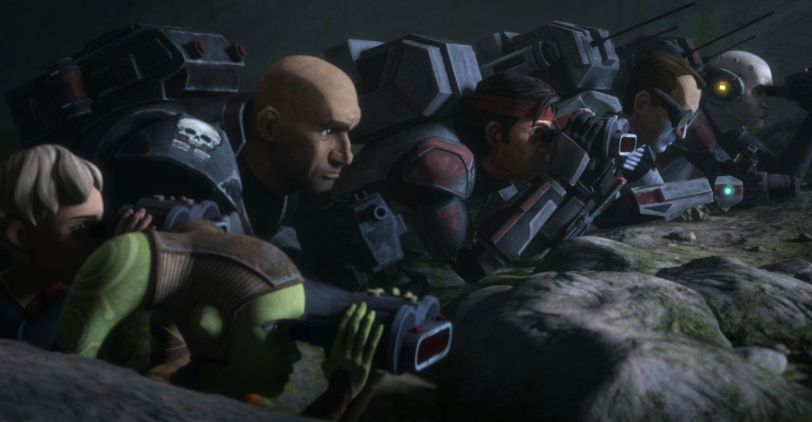 When the Bad Batch make their way to the capital city, they see just how dark the situation has gotten. I like how they are shocked that the Empire is treating the Republic planet the same way they treated a Seperatist one a few weeks ago. Another detail that I enjoyed was the look of the episode. In contrast with the last episodes vibrant colors and landscapes, this one has a grey and lifeless feel to it. Which makes sense as it’s meant to reflect the Empire’s occupation, and how the planet is slowly but surely becoming darker as the takeover continues. 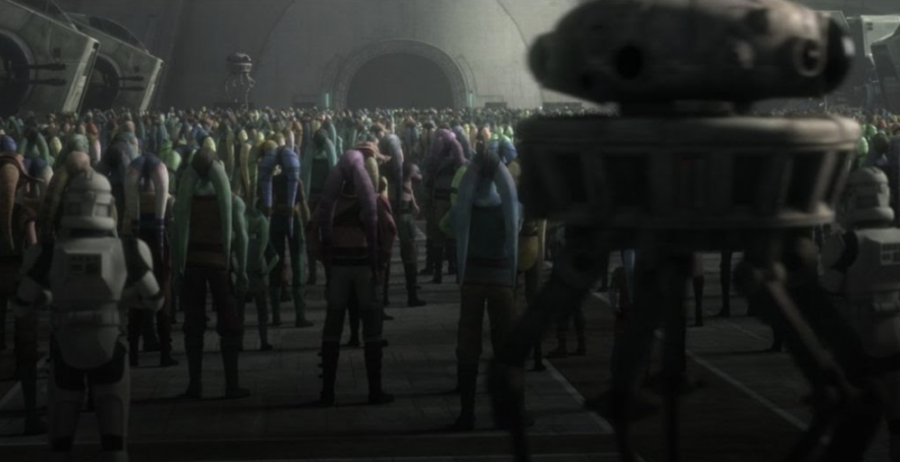 While that’s going on, we get to see the dynamic between Crosshairs and Rampart, as the former is getting on his superiors’ bad side due to his ineffective methods of stopping the rebels. We haven’t been getting much development out of Crosshairs throughout the series, so it is nice to see that even he can’t stand the position he’s in. On top of repeatedly failing to take out his former batch members, he also has to meet his superiors demands as the Empire is still deciding if clones are worth investing money in aside from normal recruits.

Needing a way to draw the Empire’s forces away from the capital, the Bad Batch makes the smart decision to create explosions near an Imperial refinery so that the troops will leave their position so they can break out the Syndullas. This part of the episode has a few fun sequences, particularly one where Omega and Hera hijack an Imperial shuttle to cause havoc and create a distraction. It’s an entertaining sequence that also foreshadows Hera’s future as an expert pilot in “Star Wars: Rebels.”

The mission seems to go smoothly, until Crosshairs subtly sees what the Batch are up to when he sees almost all the Imperial forces leave the capital. Realizing what they are up to, he singles out a small squad to wait at the capitol building entrance where he waits on a perch to snipe them out.

Once the Batch members make their way into the facility and free the Syndulla’s, they are about to leave the building’s entrance before Howzer steps in and warns them about Crosshair’s trap. In an act of defiance, Howzer tells everyone to leave another way while he tries to reason with his brothers. The scene where Howzer openly defies the Empire was the biggest standout in this episode. A lot of that does come from the progression of how they went from protecting the people, to outright taking over their world. It was a well built up moment that carried a lot of weight as we don’t know what’s going to happen to this character after this. It even shows how not all clones are controlled, as some of them even put down their weapons to join him. However, Crosshairs immediately has Howzer and the defiant clones arrested and placed in custody. Thankfully, this moment was not in vain as we see the main characters escape on a shuttle and leave the planet.

The Bad Batch then make their way to Ord Mantell City where the Syndulla’s prepare to leave and organize their resistance. They have a conversation about how occupations like the one on Ryloth, are happening on other worlds. Hunter isn’t sure about joining the Rebels as he already has his own team to look after. But it’s already made evident that a war is coming, and they will eventually have to join the fight.

The episode ends with Crosshairs going up to Vice Admiral Rampart, as he requests permission to personally hunt down the Bad Batch. Rampart obliges, as Crosshairs walks off ready to take down his brothers. 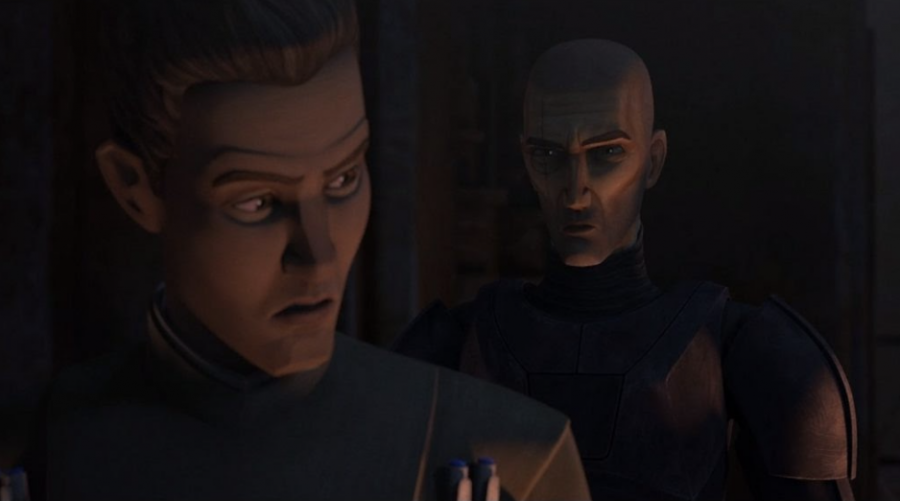 The show caught us off guard when they introduced this plot line into the series. Though thankfully they managed to tie it into the larger narrative, as we see how certain characters fit in the big picture.