To better understand Student Government’s role in deciding the budget at UNF, Spinnaker met with Student Body Treasurer Mikhaela Alforque earlier this week to discuss the importance of her role.

Rather than hire a professional staff member to take care of these finances, students are allowed to apply for the position. Simply put, the Treasurer acts as an advisor for both the legislative and executive bodies.

“The reason, I think, that they decided to give this position to a student is so that a student has that learning curve,” Alforque said. Students would also be able to “see the internal process of what it could be like outside of the university, and give them that opportunity” to learn.

Alforque went on to explain how the budget is broken up here at UNF.

She noted that UNF itself does have its own budget. However, the Activity and Services fee is used to fund entities of the university, such as the Student Union, Lend-a-Wing, student travel, and more. The image below shows a breakdown of different campus entities, their expenses, and allocations. 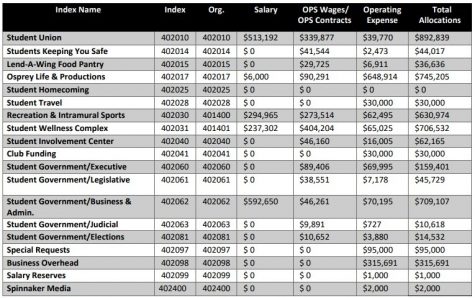 As depicted above, the three most expensive allocations go towards the Student Union ($892,839), Osprey Life & Productions ($745,205), and Student Government/ Business & Admin. ($709,107). “The budget is from expected revenue,” said Alforque, and therefore, it changes semester to semester.

The image below breaks down the total expected credit hours for the next semester. All the amounts come from the expected student population for that semester. The resulting amount, a whopping $5,941,040, becomes the budget for the fiscal year 2022.

Specifically, “the A&S fees are used to fund student interest” she elaborated. “We want to give the money back to the students who are paying the A&S fees. This money is used to fund events, and such, and that can differ from index to index.”

According to the Treasurer, deciding the SG budget is something that is “very important” because it lays a strong foundation for the following year.

More information on the budget can be found under the public record here.