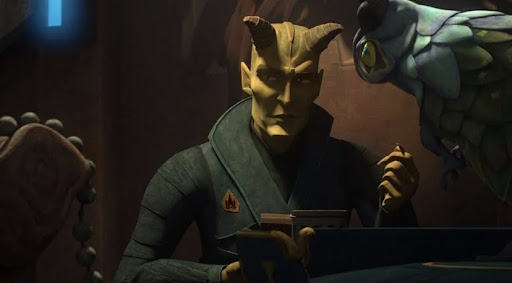 After last week’s story arc resolution, the episode feels more like a usual filler that’s used as a detour from the larger narrative.

The episode “Infested” sees the Batch return to their client Cid’s bar, only to find it under new management as crime boss Roland Durand forcibly took the bar to establish himself in the galaxy’s crime world. The Batch finds Cid outside who plans to take back the parlor by stealing one of Rand’s spice shipments meant for the Pyke Syndicate. The only way to sneak in, however, is through the city’s underground tunnels which are filled with nocturnal creatures that pose a danger to our characters.

I’m gonna be honest and say that this was one of the less memorable parts of the series so far. In that, it plays out exactly like a usual side story. While it isn’t bad on its own, it does feel like an episode you can skip so you can get back to the main story. I know every episode can’t be as big as the other ones, but I feel this series is more than capable of going above the average mark.

The idea of having the Bad Batch help their benefactor regain their place sounds like an entertaining premise. But it doesn’t do much to further the characters, as they for the most part play the roles that we’re familiar with. You haveWrecker who is afraid of heights, you have Tech building things, and you even have Omega talking Hunter into helping someone he’s skeptical about. We understand that these are their character traits and personalities, but you do start to see some elements repeating after a while.

With that said, there are still a few saving graces that do help this episode stand out — some of them include Cid’s and Durand’s characters. I feel the main reason is that these people go through the most development, and have the most to lose in this situation. Seeing Cid interact with the Bad Batch is always entertaining. I especially like how the two patrons in her bar are always by her side playing cards whenever she goes somewhere. The people behind this episode also do a good job at making you side with this type of character. Durand’s character is also given a fair amount of development as he starts out as the big crime boss, only for it to be revealed that he’s not exactly a big bad when things don’t go right for him. His mix of threat and vulnerability make him more than a one-off character.

There are also a few action moments that do stand out to me. One of them being an underground cart chase scene that’s an obvious throwback to “Indiana Jones: The Temple of Doom.” Just take out the child enslaving cultists, and replace them with some bounty hunters and hundreds of large insects. The scene ends when the Batch lose the spice in the tunnel, and are confronted by the Pykes who demand their payment. The situation becomes dire when they take Omega hostage, forcing the group to go back to the creature’s nest and find the spice.  The group makes a smart approach by using ropes to slide down into the chasm before nightfall when the creatures are more active. Naturally, things don’t go smoothly as they wake the insects as they are escaping. This leads to a funny moment of Wrecker screaming “Get us out of here!” on the comms which made me laugh. When the mission is over, the Batch gets Omega back, Cid gets her bar back, and the Pykes get their spice and Durand leaves.

I don’t have much else to say about this episode as it didn’t leave much of an impact on me. While I’m not walking away saying this was the worst, I can’t say it was the best either. Hopefully next week’s episode will have more of a punch.

Rating: 3 out of 5 Spinnaker Sails.