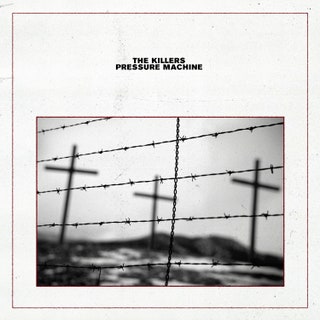 As The Killers’ seventh studio album, and the second album released during COVID-19, Pressure Machine is a nostalgic, melancholy album about a small town in Utah. All of the tracks start out with a unique voice track, enhancing the personal nature of the songs with various stories and interactions that set up the lyrical meaning of each track. The instrumentation of this album is also very sophisticated with orchestral sounds that create a melancholy tone for the album.

West Hills: This song sets up the small hometown theme of the album, connecting Flowers to the religious struggles of his upbringing. The lyrics “While they bowed their heads on Sunday, I cut out through the hedges and fields” introduce the differences experienced by Flowers as he associated organized faith with more than just the church. This track’s instrumentation is peaceful, with moving orchestral lines that stand out alongside Flowers’ vocals.

Quiet Town: This track is very reminiscent of frontman Brandon Flowers’ song ‘Lonely Town’, and is one of the more upbeat tracks on the album. With catchy instrumentation, the lyrics are also a throwback to the story-telling of The Killers’ previous hits “Miss Atomic Bomb” and “Dustland Fairytale”.

Terrible Thing: This may be the saddest track on the album. The lyrics build beautifully to the chorus: “I’m in my bedroom, on the verge of a Terrible Thing.” The painful lyrics allude to a young man’s experience in his hometown, specifically with his family and community: “Hey momma, can’t you see your boy is wrapped up in the strangle silk Of this cobweb town where culture is king?” This track is parallel to the later song “Desperate Things”, which also considers the desperation of someone struggling emotionally.

Cody: The opening voice to this song is very interesting, referencing a ‘higher power’. The child in the song, “Cody”, is made to seem dangerous and reckless with lyrics like “He does his talking with his fists”. The chorus, “We keep on waiting for the miracle”, suggests struggles with religion, which nicely follows the theme of struggling in a small hometown.

Sleepwalker: Frontman Brandon Flowers describes this song as “coming back to life” after he moved back to his home state of Utah. It has upbeat instrumentation with lyrics describing the beauty of the seasons and life itself. The line “‘Cause everyone is afraid of something” is a rather personal message for listeners, encouraging them to enjoy life despite these fears.

Runaway Horses: Featuring artist Phoebe Bridgers, known mainly for her song ‘Motion Sickness’, this track opens with a story about a dying horse at a rodeo. The moving lyrics describe a couple with the ambition to push ahead in life, who are subsequently struck with obstacles that change their paths. The line “And every step is a silver prayer in the face of a hard wind” is relatable for audiences in that most people really do rely on faith and luck that their dreams will one day be realized, or at least that they will be able to be happy.

In the Car Outside: This track is more upbeat as well, but the lyrics present a darker side of struggling in a long-term relationship. The fast-paced instrumentation pairs well with the lines “It’s like waiting for a train to pass” and “It’s like a flood of grief and sorrow from a haunted life”, relating to how quickly life moves with or without us, and how we can sometimes get carried away in our choices.

In Another Life: This sad track is almost like an alternate ending to the previous “In the Car Outside”. The track opens with a voice describing drug addictions and the escapist culture that permeates our society today. The line “Is this the life you chose yourself, Or just how it ended up?” is a painful consideration for how our choices can make or break us. Despite the instrumentation of this track, the lyrics to this track follow the dark tone of the album thus far.

Desperate Things: Flowers cites this track as “This is probably as dark as [he has] ever gotten”. The lyrics follow a cop who falls in love with an abuse victim and subsequently murders her abusive husband. The instrumentation for this track is slow and somber, easing the blow of the truly devastating lyrics. Unlike the earlier track “Terrible Thing”, this song portrays the intense battle between someone’s mentality and their real environment, rather than just their personal struggles. The final lines “And when people in love are desperate enough to abandon their dreams, People do desperate things” are truly heart-breaking, because most listeners can actually identify with the pain of loving someone whose life is incompatible with your own.

Pressure Machine: This track is another hard-hitter, with lines like “Don’t you feel the time slipping away?” that emphasizes the movement of life right before our eyes. The instrumentation is gentle and smooth, allowing Flowers’ voice to stand out strongly. His vocal talent is especially apparent in the chorus of this track, as he’s able to hit high notes with a beautiful tone. As the namesake single of the album, it’s a true testament to how life goes on.

The Getting By: The opening voice track for this song shows the peaceful exploration that kids are allowed in the album’s town. Flowers’ soft vocals match the subtle guitar in this track, and the lyrics “But maybe it’s the stuff it takes to get up In the morning and put another day in”. The closing track for Pressure Machine emphasizes the hard work that surrounds a town as small as the one described, and how life doesn’t always align with what you want or need.

The emotional lyrics and somber instrumentation create a very personal listen from The Killers. The repetition of voice tracks at the beginning of each song can be a little distracting from listening to songs individually, but create a very smooth story for the album as a whole. This album is a unique release for The Killers, utilizing new techniques without taking away any of their classic sounds.

Spinnaker Radio rates this album 4 out of 5 sails.