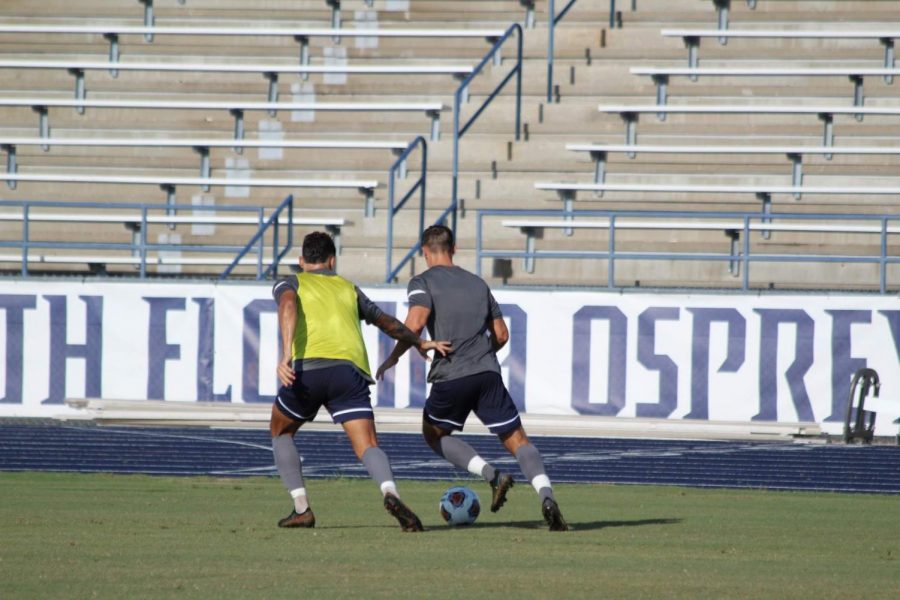 All eyes were on Hodges Stadium on Tuesday evening as UNF hosted the 13th-ranked team in the nation. While the Ospreys didn’t take an outright win, a 1-1 draw was nothing short of a successful outing.

The FIU Panthers are a familiar non-conference opponent for many of UNF’s teams, and the two faced off in a high stakes men’s soccer match. A lively crowd of over 500 fans helped bring plenty of energy as the Ospreys took a shot at one of the best teams in the country.

The Panthers entered Tuesday’s match with an unblemished record of 3-0. Early games included wins against top-15 UCF and VCU squads. Earning a victory would be tough for UNF, but they proved to be up to the task in the match’s opening minutes.

It didn’t take long for UNF to get on the board, as Bryson Smith found the back of the net in the 13th minute. Now up 1-0, the Ospreys didn’t let off the gas any. The Panthers only managed to record one shot in the first 44 minutes of the match.

Just before halftime arrived, FIU was awarded a crucial penalty kick. Kareem Riley wouldn’t let the opportunity slip out of his grasp, scoring on the kick to knot the score at 1-1 going into the break. Despite losing the lead, hopes remained high as the Ospreys played a great first half.

One concern going into the second half was a shift of momentum. Towards the end of the first half, FIU was controlling the ball a bit more than UNF. Luckily for the Ospreys, the Panthers simply weren’t getting many quality shots despite the trend.

UNF would start the second half with a shot on goal that got fans out of their seats but narrowly missed. This was later followed by a scary moment for the Ospreys when FIU converted a corner kick into the net. However, this was overruled due to an offsides call, and the score remained 1-1.

If there was one thing this game didn’t lack, it was intensity. The two teams racked up a total of 13 yellow cards throughout the evening. A few of these came due to a scuffle that broke out along the sideline near the team benches.

The full 90 minutes came and went, with the score still tied 1-1. This meant extra time, and the next goal would win the game. This goal never materialized for either side, though. FIU thoroughly dominated possession during the extra 20 minutes.

Despite walking away with a draw, this result is an impressive one for the Ospreys. Even when the momentum shifted to the Panthers, UNF held firm and never gave in. The fans were loud and energetic, something that the players seemed to feed off of.

The Ospreys will next be in action on Friday as they hit the road to take on Georgia Southern University. UNF’s next home match will be on Saturday, Sept. 18, so make sure to come out and support the Ospreys as they begin conference play against Central Arkansas.