Spinnaker staff reflects on the 20th anniversary of 9/11 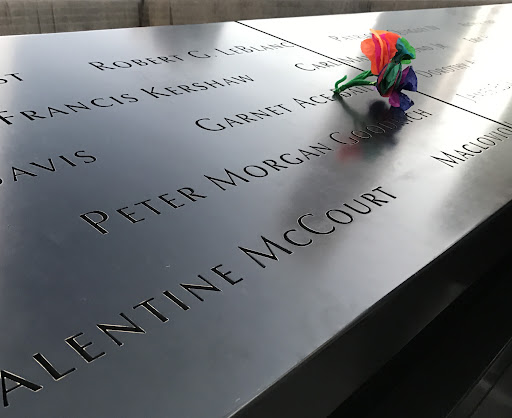 The 20th anniversary of September 11, 2001, is just around the corner. It’s a horrific day in our nation’s history and represents true evil. As the date inches closer, it’s time to turn our attention towards those unforgettable moments and honor all the lives that were lost that day.

To commemorate the anniversary, the staff at Spinnaker joined together to reflect on 9/11. It’s a difficult time for those who still remember the event as if it was yesterday, but a necessary reminder of how the American people united in its aftermath.

Some team members were born shortly before or further from the day, but each had something important to share—others who were old enough to remember shared anecdotes about how it impacted them and their families. One member of our team even served two tours in Iraq due to the terrorist attacks.

Thank you, Robert J. Lessen; we couldn’t be more grateful for your service.

“I was in my junior year of high school sitting in my biology class when the plane hit the towers. We were all in shock to see that this was going on. The whole school stopped for that day to watch the news in every class to see what was going on in New york. After the plane in the pentagon, I ran out of class to call my dad to see if he was ok. He and my stepmom work on capitol hill (US senate) lucky the third plane did not hit the US capital.

9/11 and my grandfather were the reasons why I joined the army and fought in Iraq twice. To rid the world of evil and let freedom reign.” 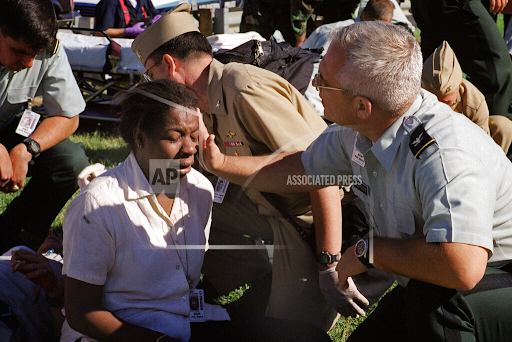 “I learned about 9/11 from my parents on one of the earlier anniversaries. They explained they had been in CA but saw the planes hit live on TV. From the get-go, I hadn’t had an incredible emotional reaction to hearing that. To me, it was an event from the past. But over the years, I quickly learned why it mattered so much.

One of the most memorable moments from learning about 9/11 was the photograph now known as ‘The Falling Man,’ and its eeriness of freezing time mid-air.”

“I remember really learning and understanding what happened September 11th, 2001 in middle school. My mom always made it a priority to make sure my brother and I understood the heaviness of that day and what happened. I remember we would bake cookies for the local police officers and first responders to show our deepest sympathies and gratitude for what they go through.

As I learned about it in books/through documentaries, I remember being in disbelief about the magnitude of the tragedy and even though I was so young at the time it occurred, it struck a powerful emotional cord in me.

In high school, I visited the 9/11 memorial to honor the fallen. Being at ground zero was overwhelmingly moving. I remember seeing a letter attached to the memorial on a name of someone who was a father. His daughter had written to her deceased dad about how she was doing, and what hobbies she had taken up. That letter has stuck with me since I saw it. The 9/11 attack is truly a day that will live in infamy.” 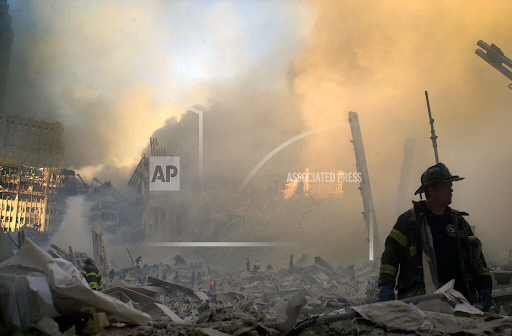 A firefighter moves through piles of debris at the site of the World Trade Center in New York, Tuesday, Sept. 11, 2001. (AP Photo/Graham Morrison)

“The events of 9/11 changed my life, in ways that I didn’t really think about until now. My dad served our country for 20 plus years, during the time, the president was dedicated to making sure an event like 9/11 wouldn’t happen again. He was deployed multiple times, making sure I would have a bright and safe future. Even though my dad was deployed multiple times the majority of my life, I understand now the sacrifice that first responders, military, government employees, and especially their families have to go through all because of the day of 9/11.”

“I was born a couple months after in the year 2001. I remember first hearing about it when I was in elementary school and we had assembly for it. I didn’t understand too much except that it was a tragedy. As I got older though and began to understand the gravity of the situation—it made me sad.”

“I wasn’t alive for 9/11, but I remember the first time hearing about it in primary school as it wasn’t as big a topic in my home country. I was confused hearing people talk about it but when I found out the magnitude of the situation, it caught my attention.”

“I was born in December of 2001, so I wasn’t alive when 9/11 happened. I don’t remember the first time I ever heard of the attacks, but I vividly remember my 6th grade history teacher showing us a video about it. Just seeing the emotions of those involved really touched me.

Last year, right before covid hit, I was in New York City and was able to visit the 9/11 Memorial Museum. Just seeing the waterfall structure with all of the victims’ names broke my heart. It was very somber, yet insightful, walking through the museum and learning more about the attacks.” 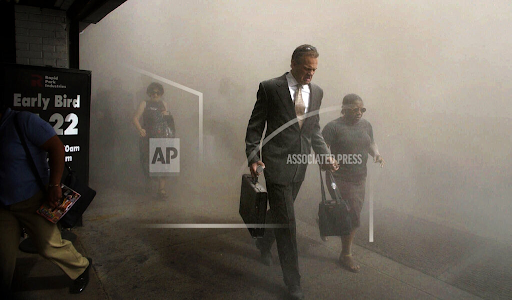 “I was born in October of 2000, so I would have been 11 months old at that point. The earliest I knew about the day was when my parents took me on a tour of the Pentagon in 2010 and I learned about the tragedy. I remember the sadness that comes with that event and the loss the country suffered that day. These are fellow citizens who were going about their normal activities.

The day is such a sad day but how the country came together to remember the victims and honor their lives was very touching. It showed me at a young age that if we can come together and support one another, anything is possible.”

“Since I was born in August of 2001, I didn’t witness the events of Sept. 11 on television or anything. I also don’t remember when I first heard of 9/11 — I guess I just grew up knowing about the tragedy.”

“When the towers fell I was only a few months old, however, my mother was born and raised in Brooklyn and the surrounding areas so the impact of 9/11 on the city was something I was always aware of. I honestly can’t remember a specific time I learned of what happened I just grew up always knowing about it.

Every year it is a very emotional time, I was raised to respect the courage and perseverance of all of the first responders that responded to the scene and to respect all of those that lost their lives. I think the biggest way that 9/11 has changed my life forever is all of the extra precautions we now take to try to prevent something like that from happening to our country again.”

“The events of 9/11 changed my life forever. My family is originally from Morocco and we primarily speak Arabic. We also follow the Islamic religion. As you could probably imagine, during these times, we’ve gotten a handful of slurs thrown and dirty looks. 9/11 was an event that I couldn’t understand at such a young age. However, as I grew older, I started to understand the effects that this event has taken on us.”

“I was in fourth grade, and I still vividly remember the day. The world suddenly paused, like how it felt in the beginning of the pandemic.

For those who were on the 92nd floor and up, there wasn’t a way to safety when the trade center was attacked. I will never forget seeing the people holding on to the side of the enormous skyscrapers and falling to their death. How does one make a choice of suffocating from smoke, being burned alive, or jumping? It was a chilling thought as a fourth grader and still stays with me today.

September 11, 2001, changed my life forever because it took away my innocence. At that age, you are protected by your parents; the world seems so large and inviting. In its aftermath and leading into America’s war on terror, my world became much smaller, and I realized the capacity of what humanity can do to each other.”