The great GPU shortage: the battle between gamers, crypto miners, and scalpers 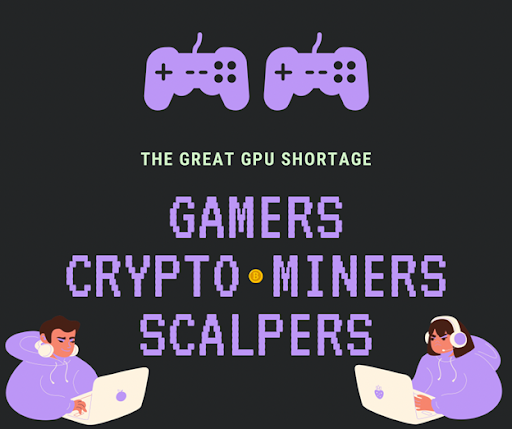 You have decided that it is about time to build a gaming PC; you have all your parts ready to assemble, watched all the YouTube tutorials, and even set up your gaming desk, but wait – there is a final boss you must face: the great GPU shortage.
What is so special about GPUs?
GPUs, or graphic processing units, are a crucial part when building a PC. It sets the standard for higher resolution, improved framerates, and better frames per second. GPUs are suddenly in short supply, and those readily available are almost triple the manufacturer’s suggested retail price (MSRP). MSRP ranges depending on what series GPU. For example, the Nvidia GeForce RTX 30 Series ranges from $400-$3,500 depending on memory size, cooling system, and boost clock speed. Most typical gamers and video editors settle for the RTX 3060 series, which sells for $300-$400 on MSRP.

What is the issue with purchasing if GPUs are affordable?
The issue is scalpers, crypto miners, and silicon shortages. Scalpers are buying up most of the stock using automatic bots. Websites such as BestBuy, Newegg, and Microcenter are trying to counteract this by using the one per household option. Since there is a high demand for GPUs, scalpers are in the game. Scalpers will typically sell basic models such as the RTX 3060 for the MSRP price of an RTX 3090. Then, they will sell the price of an RTX 3090 one thousand dollars more than the MSRP.

Stephen Smith, a current reseller in the market for designer shoes, spoke about the issue. “I understand the scalpers. It’s like me with sneakers. I used to resell sneakers. Anything to make a quick buck, but there is a fine line between trying to make money and just being greedy. This is why the market value on GPUs is what they are now.” Smith also expressed that he would pay over retail for a GPU, just not double. Many buyers in the market can relate. RTX 3060 series that has an MSRP of $300 would not be worth spending up to $700.
What are crypto miners doing in this market?
The cryptocurrency of course! E-commerce is on the rise, becoming one of the most used paying formats such as PayPal, Apple Pay, and the most widely known Bitcoin. While gamers are eager to snag a GPU for better gaming quality and scalpers for marginal profit, crypto miners are in it to collect their crypto tokens.

A crypto miner typically checks transactions to ensure that users do not spend the same currency twice. Along with the high demands for GPUs, this is because “a high number of confirmations is effective to reduce the probability of a successful double-spending attack” (Hou and Chen 2020) In the Bitcoin Essentials, Albert Szmigielski explains GPU Mining as “a high degree of parallel processing built-in and as such they are perfect for the repeated hashing of candidate blocks.” (Szmigielski 2016) GPUs are known for being notoriously faster than typical CPUs in this sense.

Therefore, crypto miners are more eager to buy up GPUs rather than CPUs. The issue here is that crypto miners use up GPUs so much that the product starts excessing a high-temperature amount of heat. This kind of usage damages the GPU, risking the lifespan for a better hash rate. Some crypto miners attempt to resell damaged GPUs triple the MSRP to buyers, which is one of the many risks typical gamers face when trying to get their hands on one.
Why are silicon chips a part of this issue?
In the simplest terms, silicon chips are great semiconductors that allow electricity to pass through, and we can control the flow easily. Silicon chips are what changed our environment with computing forever. Instead of being in a room dedicated to large boxy computers, we can now travel with a laptop in hand. Because of how effective silicon chips work, it is also a crucial part of GPUs and CPUs.
How can you get your hands on a GPU?
The battle of snagging a GPU is tricky. Since everyone has been distancing at home this past year, gaming communication software like Discord has become popular. Discord servers are like massive group chats filled with voice chats, subcategories to join, and automatized bots. You can join a server specifically made for GPUs that sends out messages to members when a restock hits. Discord servers like StockDrops have saved regular buyers hundreds of dollars to avoid scalpers.