This year’s River City Rumble is kicking off soon, but what exactly is it? 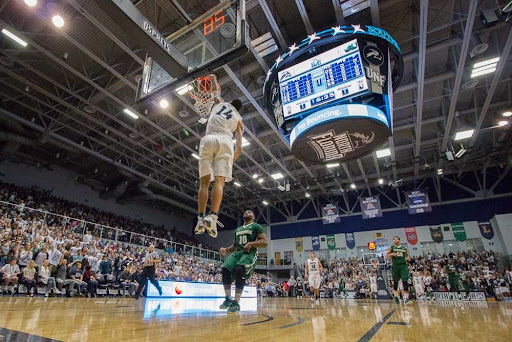 Every year, UNF faces off with rival Jacksonville University in a battle for River City, but what makes this such a fierce rivalry?

Known as the River City Rumble, this athletic competition spans all team sports throughout the academic year. The school with the most wins against each other by the end of the year wins the “Old Wooden Barrel,” the competition’s trophy.

Since the first official challenge in 2005, UNF has possessed the barrel for 10 non-consecutive years. In years where both schools win an equal amount of matches, the previous year’s winner hangs on to the barrel.

Last year proved to be UNF’s most dominant win, taking 16 of 20 events. This extended the Ospreys’ winning streak to 3 years with the barrel. One highlight of the 2020-21 season was UNF beating JU in six of eight baseball games.

Basketball usually generates the most buzz, with UNF Arena often experiencing its largest crowds of the year when JU shows up. This year’s basketball meetings don’t get started until January, but the overall competition begins much sooner.

Men’s soccer gets the slate started this year, with the Ospreys and Dolphins facing off on Saturday. This game will serve as a critical match, with early conference play heating up.

While this opening match is on the road, that’s one of the best parts about the rivalry. The campuses are just over 10 miles apart, making it easy for fans and students of both schools to attend the events.

No matter which side of the rivalry one is on, it’s always a great source for friendly banter. Even if a team is suffering a bit of a down year, the River City Rumble seems to produce exciting games regardless of the records.

The 2021-22 series is poised to be an exciting one, with many of each school’s teams having championship aspirations. Reigning over the River City is no easy task, but here’s to another great season of competition.