‘Venom: Let There Be Carnage’ review 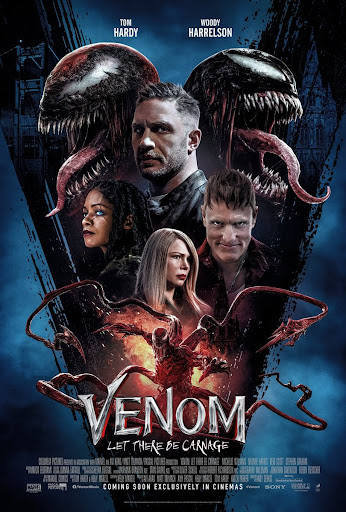 Never thought I’d see the day where a film like “Venom” would be able to score a sequel. Despite being panned by critics and even comic fans, it gained a die-hard audience that wanted to see Tom Hardy go all out with this performance. Naturally, this resulted in the first film being a big hit at the box office, and this sequel is proof of that.

Eddie Brock (Tom Hardy) is back and currently adjusting to hosting a symbiote named Venom, which allows him to act as a vigilante. But these events don’t prevent him from reaching out to his ex-fiancee Anne Weiying (Michelle Williams) who has since moved on from their relationship. While all this is going on, Brock goes to reignite his career as a journalist by interviewing serial killer Cletus Kassady (Woody Harrelson), who becomes the host of a “Carnage” symbiote and breaks out his love interest Shriek (Naomie Harris) to wreak havoc.

Before I go into my personal thoughts, I would like to go into a little background about my history with the character. The Venom in the comics is often a villain or an anti-hero but is still a great character. Personally, he’s one of my top five favorite Marvel villains of all time. His rivalry with Spider-Man, as well as the duality between Eddie Brock and the symbiote, make for some interesting stories. So when the first film came out, I was pretty underwhelmed by it as not only did it have no connection to Spider-Man, but it took a more action/comedy route as opposed to action/horror that the character was known for. With that said, it was entertaining to watch Tom Hardy in this performance interacting with this alien creature. But it didn’t take enough risks and mostly played out like a buddy movie with 90’s tropes.

When I found out they were making the sequel with Carnage, another Marvel villain I love, I was excited to see what they were going to do with it. Knowing that I was about to see a film starring Tom Hardy and Woody Harrelson, topped off with “Gollum” actor Andy Serkis himself as director, I had a lot of expectations walking in.

Having seen the movie, if I were to describe this film in one word it would be ridiculous. But I mean that in a good way. While it relies on familiar clichés, such as the “odd couple” and the split up that separates them, it’s still being portrayed by these actors who keep them entertaining. The dynamic between Eddie and Venom is once again the highlight of the movie. The people behind this know that this dynamic is what people loved about the first film. Their interactions are essentially like watching Tom Hardy arguing with himself.

Woody Harrelson and Naomie Harris are also a lot of fun. You can tell that they are having a ball acting insane while playing these characters. They are essentially the supervillain couple equivalent of “Bonnie and Clyde”. I can’t help but get invested with these two every time they are on screen.

While the performances and tone are very entertaining, there are a few issues with this film that will throw people, particularly fans of the first film off. The first one is the editing. This film feels like it was trimmed down a lot throughout production. There’s a lot of dissolves that come out of nowhere. You also have some scenes of ADR (Automated Dialogue Replacement) where people are facing away from the screen, but they insert the actors’ lines in during editing. I understand that this film has a runtime of 97 minutes, which I felt could have been expanded to give us more character and even Venom/Carnage action.

When the movie started I thought it was going to center around the rivalry between Hardy and Harrelson. Basically, these big-name dynamic actors going against each other. The scenes they share together are so fun to watch as they have such big personalities. I wish they had more interactions throughout the film, which is something people want to see from a Venom/Carnage movie. However, you primarily get these scenes in the first and third acts, and I wish they had more opportunities to interact throughout the film.

Another element that I feel people are going to be split on is the comedic timing during certain scenes. Don’t get me wrong. These are all actors who know how to say funny lines and have good deliveries. But there are moments where they are making these lines sound funny, but on paper, they don’t feel funny. I was ready to laugh and roll in the aisles at these setups. One good example is the Venom symbiote going to a rave party where he “comes out” with his newfound freedom to the crowd. Now that’s a fun setup. It’s not the character from the comic, but it’s still something that I want to laugh at. However, while I found the setup bizarre and entertaining, the dialogue wasn’t exactly hilarious. Though honestly, I think the humor comes from the absurdity of these situations, rather than the writing itself. If you watch these scenes and laugh then you’re going to have a good time. It’s just how I personally feel.

Anyone who has read “Maximum Carnage”, one of my favorite Spider-Man storylines, was expecting elements of that comic to be portrayed here. I knew it wouldn’t be the same setup, so I was hoping they would set that storyline up in future films when they introduce more characters down the road.

The action and effects have improved from the first film. They still look cartoony, but are still creative and shot in a way where you can see them more clearly. This is something you would expect from a director who’s very experienced in motion capture. I can’t help but feel a lot of the action was cut down, almost as if it was originally a harsher rating but they had to keep it at a PG-13 level. This is probably going to turn off some people because when they see how cool Carnage looks, they’re going to be expecting him to do some gruesome stuff like in the comics. It’s not that he does nothing here, as he and Shriek have some cool scenes. However, the amount of actual carnage that they were building up in the advertisements is not that much. While there are moments where Carnage randomly kills people for no reason, these scenes are rare and I wish there were more like them.

It’s gotten to the point where when we reach the third act, I wished we got a lot more of the villains doing violent things. I mean this is a movie that stars Carnage! You read the comics and look at the images of him committing random acts of violence, that’s what you would want to see in live-action. But the violence is toned down,, which is a shame because I want to see this character truly done justice with no restraints.

I feel like people who are going into this just want to turn their brains off, and just want to see these actors go through these familiar but fun clichés. I completely understand that, as there are moments that are fun and get a laugh out of me. I was ready to lose myself with the insane choices this film was gonna make. But a good portion of the movie plays it safe, which is something you don’t want with characters like Venom and Carnage.

As usual for a Marvel movie, stay for the after-credits scene as it’s probably the biggest part of the film. To me, it wasn’t a surprise as it was heavily rumored what they were building up to in recent years. But it is something people need to see as it teases something that fans have been waiting for.

To sum up my thoughts, I do think it’s an improvement over the first film. However, it wasn’t spectacular to me because it had too many restraints and needed to be more hardcore. If you look at the trailer and say that it looks fun, you’ll have a good time. The actors are fun, some moments made me laugh, and it has enough entertainment value to where I can see people getting into it. Suit up and see if this movie gives you your symbiote fix.

Rating: 3 out of 5 Spinnaker Sails