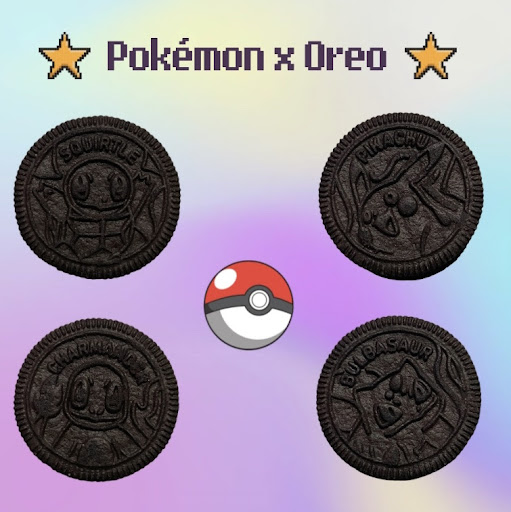 Nintendo and Nabisco collaborated on their newest release of the limited-edition Pokémon Oreos on Sept. 13. One side of the cookie displays the imprint of sixteen different Pokémon, which can include the iconic Pikachu, Bulbasaur, Charmander, and Squirtle starter Pokémon. After creating a poll on Spinnaker’s Instagram, 58% of users said they were excited for Pokémon Oreos, while 42% disagreed.

Since their launch, buyers have already begun searching their packages for the rarest of them all.

“There are 16 Pokémon themed OREO cookies to discover. But be aware, some Pokémon are harder to find than others. With a random assortment of Pokémon designs in every package, each package is a chance to find all 16, including one super rare Mythical Pokémon,” as mentioned on Oreo’s website.

The one super rare Mythical Pokemon is the Mew Oreo. This Oreo is being listed for up to $100,000 by sellers on eBay. However, it should be noted that there isn’t much research on who’s really buying these delectable cookies. The Pokémon Oreo’s are still in stock in local stores such as Target, Walmart, and even Go Puff for the retail price of $3.79.

Why are resellers getting their hands on them?

In the decade of collaboration, the easiest way to put it is they won’t be here long. Resellers buy up stock, such as Pokémon Oreo’s, for future value. Since it’s a limited edition drop, they invest now and preserve the item. Collectors fund this profit, as for some it’s a hobby of theirs and they would gladly pay the price.

Spinnaker posed the question, “How much would you spend on a Mew Oreo?” on Instagram. Answers from users seem to differ, but the most popular one is that they wouldn’t spend over a dollar for a Mew Oreo.

“No more than I would spend on a regular Oreo honestly. It’s still just a cookie.” One user responded.

Take for example the BTS x McDonald’s collaboration. Trending all over social media were people taking posters from the fast-food joint, preserving packaging from the meal, only to resell on eBay.

Supreme x Oreo is a prime example of how something so simple could turn into a fortune from reselling value. Forbes Magazine covered the resell bidding, striking up to about $91,000 from the original cost of $8 per pack of three before eBay took down the bidding from their site.

The Pokémon x Oreo collaboration does spark nostalgia, however, Oreo manufacturer Mondelez International has caught some heat from the public. Amidst the excitement from consumers for the launch, a union strike from workers that manufacture Nabisco products began earlier this year.

What happened with the Nabisco workers Strike?

The strike began in a Nabisco facility in Portland, Oregon on Aug. 10. The labor strike was caused due to disagreements between workers and the company over their union contracts.

Nabisco was looking to make changes in the worker’s scheduling and healthcare coverage and the workers opposed which resulted in members of the union in Portland performing a walkout. As days passed, other Nabisco facilities joined alongside striking against the corporation.

These efforts also began trending on social media such as Twitter, Tiktok, and Facebook. Users urged the public to refrain from purchasing any Nabisco products, forming a boycott until the company came to an agreement. Some have found shelves at their stores fully stocked when it came to the Nabisco snacks isle. They often post using the hashtag #NoContractNoSnacks.

Recently on Sept. 18, the union said they agreed with the contract and await a vote by union members to confirm.

“Our goal has always been to reach agreements that would provide our union-represented colleagues with good wages and competitive benefits, while also positioning our U.S. bakeries and sales distribution facilities for future growth and success,” Glen Walter, an executive vice president of North America for Mondelez, said in a statement provided to the New York Times.

For Nabisco, tensions rise high between union members and consumers. Solidarity during these times becomes difficult between producer and consumer. Social media gives users a voice and it seems to have been the beginning of their resolution.

Nabisco has begun its journey of collaborations. However, they still face criticism when it comes to their side of the deal with workers. Beginning their mark with the iconic Supreme x Oreo, they’ve touched many with the nostalgia of Nintendo’s Pokémon. Did you resist crossing the picket line on this release, or were you able to catch them all?