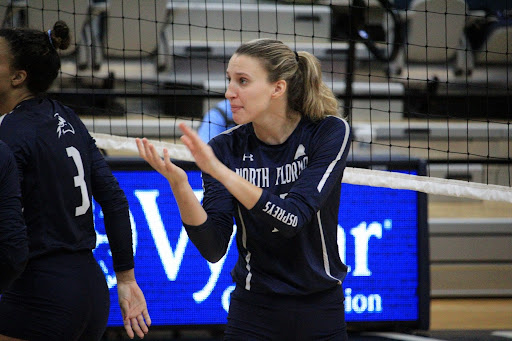 UNF clashed with Jacksonville University for the first time this season on Saturday, as the Ospreys downed the Dolphins in dominant fashion.

The Ospreys have gotten off to a historic start, while the Dolphins have had a rather rough time getting things going this season. However, the sets, despite there only being three, were much more competitive than one may think.

As the opening set began, one thing was clear: it was going to be loud. A season-best attendance of nearly 800 people, combined with the UNF band and cheerleaders, created an incredible atmosphere for the evening’s event. Head Coach Kristen Wright appreciated this, speaking on it postgame.

“We’re so grateful that they’re showing up and being a part of our wins. We needed them tonight… Kudos to our hometown, it was awesome,” Wright said.

Things were back and forth to start the first set. After settling in, the Ospreys jumped out to a five-point lead. JU would respond, though, cutting the lead back down to just two points. From this point on, it was all UNF as a kill by standout freshman Anna Butler gave them a 25-16 opening set win.

With a convincing set win under their belt, how would the Ospreys fare in the second set? It’s safe to say JU took the loss to heart, as this set would be the most difficult for the Ospreys.

Early mistakes by UNF allowed JU to jump out to an early lead. A strong kill by Dariana Hollingsworth-Santana helped stunt JU’s run. The Dolphins would open a lead back up, jumping ahead 16-10. The answer? Another clutch kill by Hollingsworth-Santana ended the run, and then yet another kill from the Mizzou transfer would take the set.

The Ospreys were able to rally and take the second set by a much closer score of 25-23, meaning one more set win would give them the match victory. Bre Walp got the scoring going, accounting for the first two points of the set. This set would prove to be a true team effort by the Ospreys, though.

A crucial save by Grace Youngblood changed the entire outlook of the set, as the high-energy play rallied the team. After a bit of back and forth, UNF took a slight lead. JU would fight back, though, taking a 19-18 lead. Coach Wright called a timeout, which seemed to come at just the right time.

The Ospreys came out of the huddle firing, taking the lead back. An error by JU gave UNF the set win 25-23. Celebrating cheerleaders were directed off the court, though, as officials reviewed the play. After a couple of tense minutes, the call stood, giving UNF a 3-0 match win over their rivals.

UNF may have picked up the sweep, but things were a bit messy at times. These mistakes allowed JU to hang around, something that Coach Wright addressed following the match.

“I didn’t think we played particularly well… We need to focus on the process of winning matches. The byproduct of it is that we’re talented, we’re gonna win. I expect much better from our team, and they know that,” Wright said.

Don’t let this distract you from the fact that the Ospreys are now 16-2. They won’t have much of a break, either, as they hit the road this week for two road matches. The first is at Liberty University in Virginia on Friday, Oct. 15, while the second takes place at Kennesaw State outside of Atlanta on Sunday, Oct. 17.

Follow along with Spinnaker for the latest on UNF volleyball.