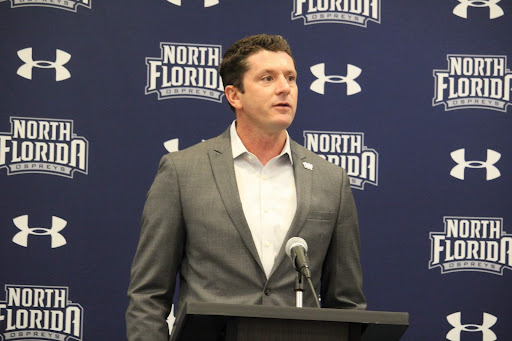 UNF Director of Athletics Nick Morrow speaks at media day, revealing the arena renovation plans to those in attendance.

As part of a continued effort to revitalize the home of the Ospreys’ basketball and volleyball teams, the athletic department committed to creating a state-of-the-art hospitality suite in UNF Arena. On Oct. 20, the UNF athletics department announced this project at their Basketball Media Day.

For an arena that was built nearly thirty years ago, UNF Arena does show its age in some areas. One of the most obvious is the lack of luxury seating, something that many athletic programs have prioritized in recent years.

This will no longer be the case for UNF, though, as the million-dollar project is scheduled to get underway following the upcoming basketball season. The project was largely funded through fundraising efforts and naming rights, most notably the Bank of England, a familiar partner of UNF athletics.

“Another reason we’re doing this hospitality suite first — why we prioritize this project — is because this will be a catalyst for future fundraising projects,” UNF Director of Athletics Nick Morrow said.

Recent arena renovation projects have included new LED lights and new lower-level bleachers. Going back a few years, the large video board that hangs above center-court was one of the first steps that helped bring the venue into the modern age.

Morrow recently completed his 100th day as athletic director, which makes the announcement of this project even more impressive. He hopes that this project will lead to further advancements in UNF’s gameday experience.

“I talked about creating the best fan experience we can. This is our goal and this is how we’re working towards it,” Morrow said.

For those who may be concerned that too much focus is being put towards the arena and not other facilities, there’s no need to fear. UNF plans for the revenue returned by the hospitality suite to be used for other non-arena projects.

“The hospitality suite is going to help us for every one of our projects we want to do across campus. Not just the arena project,” Morrow assured. “We’re talking about a new soccer complex, tennis clubhouse, baseball stadium, upgrades to softball batting cages. All those things will come from having this space that we can entertain donors and sponsors…”

Further down the road, the athletic department hopes to find more naming rights partners to fund other projects, such as a new arena floor and upgrades to the arena exterior. In the nearer future, though, a new sound system will be installed alongside the hospitality suite’s construction.

With monumental projects like these being announced, it’s safe to assume that UNF athletics are in good hands. The Ospreys will be able to proudly call UNF Arena their home nest for years to come.