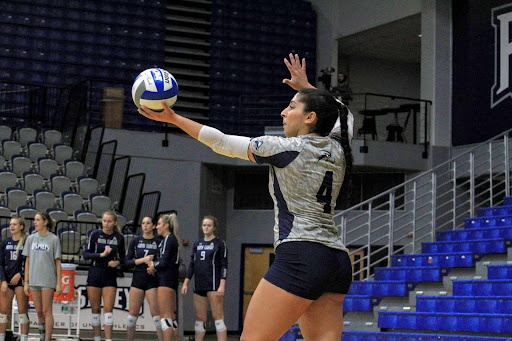 The Lipscomb Bisons have been the thorn in UNF’s side for almost ten years, but that all came to an end on Sunday when the Ospreys strung together a victory.

While Sunday’s win was critical, it wasn’t the only one of the weekend. The Ospreys took down Bellarmine on Friday and Eastern Kentucky on Saturday, both part of the weekend’s ASUN Crossover. These wins served as a great source of momentum for UNF going into Sunday’s bout with the defending ASUN champions.

The opening set was as close as it can get, with the Ospreys squeaking out a 25-23 set win. This wasn’t the case throughout the entire set, though. UNF led by eight points early in the set, a deficit that the Bisons fought to erase. However, a kill by Dariana Hollingsworth-Santana secured the set for the Ospreys.

Lipscomb jumped out to an early 4-0 lead in the second set, but it would be very back and forth throughout. Once the set was tied 6-6, neither team led by more than two points. An attack error by UNF ultimately gave Lipscomb a 25-23 set win, tying the match at one set a piece.

The third set got off to an even start, but this would soon fade as it was all Ospreys. UNF ran away with the set, winning it 25-17. The Ospreys only needed one more set win to take the match.

With their backs against the wall, the Bisons responded as one would expect them to. They got off to a strong start. It started to look like the match may go all five sets. However, the Ospreys anchored down and ultimately pulled away, winning 25-18 and taking the match win.

Beating the defending conference champions is a big deal in its own right, but there was more on the line Sunday. This was UNF’s first win over Lipscomb since 2012, and it was also the 20th win of the season. This clinches UNF’s first 20-win season since 2015, a testament to how head coach Kristen Wright has turned the program around.

The Ospreys will next be in action on Friday, Oct. 29, as they look to avenge their previous loss to FGCU. This time, they’ll have a shot at the Eagles on their home court in Fort Myers. UNF then faces Stetson in DeLand that Saturday. The regular season is coming down the stretch, and the Ospreys looked poised to make a deep run in the postseason.